We’ve been busy with the Littlest Grandbeastie for the last couple of days which was kind of a fun way for T-Man to start his retirement. I warned him that stuff grows to fill the available space but he doesn’t seem too worried about it! Rosebud was a sweetie-pie as usual. So cute that she’s starting to talk now – even though walking yet eludes her. A few steps and it’s down on the well-padded behind. Soon however we’ll be chasing her everywhere, I’m sure. Already we’re chasing her crawling up the stairs to my studio. Hey, who knew that cones of weaving yarn have another use as a rolling toy?

Meanwhile, I managed to finish another sewing project. This one was just a quickie but gave me some helpful experience with Japanese patterns. 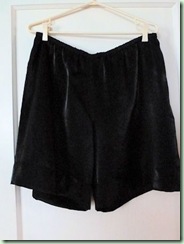 Pattern:  a combination of 4B and 4C from Simple Modern Sewing. 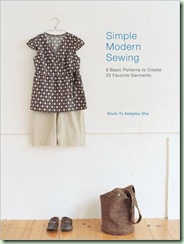 Fabric:  polyester/viscose satin (manufactured in Italy), black with silver sparkles, remnant from Dressew, leftover piece from the lining on the Bubble Twist Skirt.

Comments:  I was excited to use a pattern from this book which seems to have lots of very wearable garments in it. (Sister Diane gives a really helpful review here.) However, as a person who is somewhat larger than the average Japanese lady, I was concerned that they wouldn’t fit me without extensive alterations. I was wrong – on this one at least. I only had to make a couple of simple changes. First of all, here’s what the pattern sheet looks like: 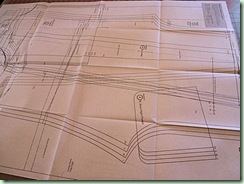 Not quite as bad as BurdaStyle, huh? I used the width given for the loose cropped pants featured on the cover which were wide enough to give me a couple of extra inches of ease which was all I needed. I used the length of these cute petticoat pants, minus the ruffle: 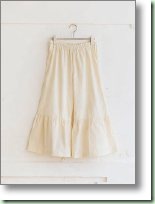 These patterns come without seam or hem allowances so I added 2” for the elastic casing at the top edge thinking the height would be sufficient as drafted. Not. I ended up serging the edge and turning down just enough so I could get 1/2” elastic into the casing. Now I’m sure modern girls would consider them high-rise but for me they are a little lower than I prefer – just below my belly button. But I think they will be comfy anyway.

The last adjustment I made was to scoop about 1/4” out of the back crotch curve to accommodate the “older lady butt”. This worked very well.

I was at a loss as to how long to hem the legs because I wasn’t sure exactly which garments I’ll be wearing these with. I compromised at a couple of inches above my knees which should be short enough not to show below anything else. Instead of chopping them off, I just made a rather large 2.5” hem and machine top-stitched it. Unfortunately I got a little bit of puckering with that deep of a hem but this is an undergarment so I’m not going to sweat it. I was also going to add lace but decide that a) I didn’t have anything suitable in the stash and b) I’d rather keep this one simple. After all, isn’t that the title of the book it came from? Anyhow, the deep hem feels rather luxe when wearing.

Now I’m starting to look at other garments in the book, particularly the sleeveless top with the bias ruffles around the neck edge. I think I have an appropriate fabric for this one, if I can find it! Otherwise I’m sure a visit to Dressew will turn up a cheap remnant to experiment with. Don’t think that one will be next on the list though I’m not sure what will be. You’ll find out eventually!

Off to go play in the dirt for awhile…