Hello all my Faithful Readers! I’m celebrating today. This is the Seventh Blogiversary of Damselfly’s Delights! Yep, I’ve been babbling here since 2005 and managed to type 1,257 posts. Who knew I could keep this up for so long? Hope you’ve enjoyed it as much as I have!

T-Man has been retired for a week now, not really long enough for either of us to really settle into the New Normal yet. But so far I’ve lost a few pounds from all the walking we’ve done! Plus he has managed to make a good start on a few of the projects that have been hanging about waiting for his time. And I’m sure – once it stops dumping rain on us every time we step out the door – that the garden will be quite spectacular this summer with all the TLC it’s going to get. No time to be bored, that’s for sure.

In the studio, I’ve been working on patterns for several summer blouses and tops I’d like to make. I’m quite tired of t-shirts. One blouse that intrigued me is this one from BurdaStyle: 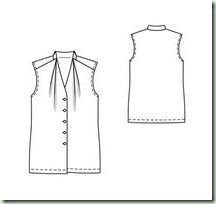 I didn’t buy the magazine when it came out because it was full of costumey folk garments. (Oddly enough I have no need for a German dirndl skirt!) But this gem was hiding in there made up in boring white cotton. Explain to me why the most attractive and wearable patterns that BurdaStyle offers are nearly always lurking in strangely modeled photos and made up in inconspicuous fabrics? Like my Banana Skirts, you must use your imagination to see the real possibilities. As soon as I saw oobop’s gingham version, I was smitten. Luckily they made it available as one of their downloadable patterns so I could buy it even though I missed the magazine.

The download included the full pattern for the dress version with two-piece sleeves and in-seam pockets too, which I’m sure confused a few people because they didn’t mention that anywhere, not even in the sewing instructions (such as they are). Took a lot more paper to print out too! Deceptively this looks like a simple slightly-retro blouse pattern but the pleats at the neck and the little back collar bring it into more complex territory. I had a rather difficult time trying to figure out how to adjust it for my own narrow shoulders. I think I have it right but now I’m afraid to cut into the fabric in case it’s not! Guess I need a muslin. Sigh. Seems like such a waste of fabric whether the muslin fits or not. Yes, I’m that cheap frugal. But I also don’t want to waste the “real thing” if I’ve got it wrong. Decisions. Decisions.

Other tops I’d like to make include one with a ruffled neck from Simple Modern Sewing, another one from BurdaStyle magazine and the Anthropologie Knock-Off top that I’ve been wanting for a couple of years now. I want a whole wardrobe of warm-weather options.

More anon. Time to schlep the plants out to the greenhouse. Again. At least it’s sunny today. Things are looking up!

Happy Blogiversary, Louisa! You've been at this for some time - I'm impressed.
That Burda shirt is really nice. I like the tucks at the neck/shoulder line. I'm looking for interesting shirt patterns for summer, so I'll be keeping an eye on you.

Thanks, Dixie! I could never keep a journal of any kind past a week or two. How I've been able to go 7 years of blogging is amazing to me!

Congratulations on the Blogiversary!

Thank you! Hope your kitchen is now back to rights and resplendent in its new colour. And the mog leaves his little friends outside where they belong! That mousie was sure cute though.

Congrats on the blogiversary!!
I am in great admiration of all your recent sewing, and am in desperate need of some summer tops myself so I thank you for all your inspiration.

Thanks for the kind words, Heather! I always hope that my crafty projects will inspire others to play too.

Do you mean the raglan sleeved top in Simple Modern Sewing? The one they pictured in checks and a Liberty print? If that is then one you mean, I thought that looked good for summer too! I fiddled the sleeves and sleeve-to-bodice seams a little for my big biceps and square shoulders and made up it in the biggest size. It's much tentier than it looks in the pictures but still a really sweet pattern! In fact I'm about to make it up again with a slightly wider neck ruffle and at least two inches trimmed off each side. In what I hope will be a drapier fabric. I'll be interested to see what you do with your blouse!

Nope, that's not the top I meant! Yours sounds cute though. I'll blog more about this.

Exciting! Now I'm trying to remember another top that had a ruffled neck . . . unfortunately, the book had to go the library. (I'd better just order it. I'm a little guilty about my free tracing-fest anyhow, and Interweave deserves my support. Plus, it would be nice to have the instructions. I always think I'll remember how I sewed something the last time, and I never do.)