So Here We Are

Yep, we’re screeching to the end of the year 2012. Was it a good year for you? It was for me. I would use the word “interesting” but one of my dear friends uses that when she really means she can’t think of anything nice to say about something! That’s not what I mean at all. There were changes and adjustments after my beloved T-Man retired. Not difficult or negative in any way – just different. I do so like my tea or breakfast in bed (we alternate duties each day) and now he does the majority of the vacuuming, some of the cleaning (especially the deep stuff that’s been ignored for years) and cooks more than he ever has before. We get out for more frequent long walks. It’s all good.

Anyhow, his presence around the house hasn’t slowed me down any on the crafty front. I dragged out my craft binder for 2012 to see what I’ve made this year. It’s quite fat!

Hope I haven’t missed anything. The tops and tunics are obviously the most popular makes. Although I would say 3 of them may be considered muslins and might not get worn much for reals. On the other hand, there are several styles I’d like to revisit because they are constantly in rotation. These are the longer tunics with funky hems or other details that take them out of the ordinary. Need more.

I seem to have slowed down on the socks especially for other members of the family. Not that they don’t appreciate them but I’ve just not felt the call. I did just finish a pair of fingerless mitts for an anonymous family member who hinted broadly for something like this. I finally managed to grab some rather dim photos of them. 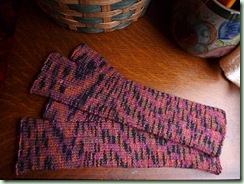 Mods: Picked up one extra stitch at crotch of thumb and decreased it away on next round to avoid a hole. Knit the thumb longer: 7 rounds total before bind-off.

Comments: This yarn is slinky and soft and would be great for those who are allergic to wool. It’s somewhat splitty to knit with but has pretty good stretch and recovery. Don’t know how it would wear in socks but will find out since I have another 2 balls in a different colourway. The yardage is less than regular sock yarn though so must take that into account.

These are lovely mitts! I almost don’t want to give them away. I want to make it clear that these are Not-A-Christmas-Present but a Just-Because-Present. Those are my favourites!

Onward, my friends, into the Holidays and the New Year! I’m so looking forward to Solstice and the return of the sun.

ooo, you've done your tally for the year already. very productive. I do one every quarter according to when I started Project Minima. But I'm not as versatile as you - no knitting, crocheting or weaving.

Very impressive, what you've accomplished this year. These gloves are a nice addition to your list. Good work!

Thank you for the encouragement, my dears. It always amazes me how much actually adds up when it seems like nothing much is ever happening!

It's ok, there is no contest and besides I can't paint anything that resembles art. :)

It was a very productive year for you. You must never stop. The gardening takes a fair amount of your time as well.

Wow, such productivity! I'd be happy if you could list your favourite tunic patterns again. I bought two lengths of fabric in the fall thinking "Tunic!" and have got no further.

Heather, the patterns are all self-drafted but I'll try to post more info when I get a chance.