Finally got a new mouse for my netbook computer, Bluet. Yay! Right before I knocked poor Bluet on the floor and gave it a concussion! My excuse was I that I was mostly asleep when it happened at 4:30am. It wouldn’t finish going through startup which was making me very nervous about lost data, another expense and general dismay at breaking my little blue buddy. Happily T-Man used his Mr. Fixit Skillz and got it working fine again whereupon I immediately went off and backed everything possible up on the big backup drive. Whew! Crisis averted. This time.

So anyway, I love my new Blue Mousie. Isn’t it pretty? 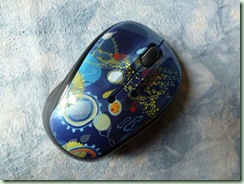 It’s a Logitech M325 in the colourway Blue Sky. So cute! The USB connection is really small and much more out of the way than the old one. Plus the scroll wheel is super-sensitive. It actually took me a little while to get used to how fast it whizzes around. Like riding a skateboard on one wheel! I’m happy now.

So what have I been up to? The tankini swimsuit I was trying to make is not going well. It’s too big on the top even though I chose what I thought was my size carefully and there is no way the straps are going to stay up on this thing. That’s a huge problem I’ve always had with just about every swimsuit I’ve ever owned – not to mention bras or anything else with narrow straps! I thought the style would be OK for me but I should have known better. Pooh. I’m going to have to rethink the design perhaps with another keyhole above the fastener in back? Luckily I’ve only sacrificed half of my lining fabric so far. I didn’t cut into the main fabric yet.

On the other hand, I do have what I think will be a good pattern for the shorts-style bottoms. Not the one that came with the original Pin-Up Girls Tankini pattern however. I tried to trace that one several sizes smaller than the one I should have but it was still going to be too loose and baggy. Hmmm… What’s with that? Probably the same reason why the top is too loose too, huh? Both pieces should have quite a lot of negative ease except, of course, over the tummy. I’m just about ready to give up and make just the shorts. And probably several pairs in various knits to wear as jammie bottoms while camping as well as “chub-rub protectors” when I’m wearing a skirt or dress. I can always wear a t-shirt or a sports bra or something if I actually go swimming. That doesn’t happen often because I’m super-sensitive to chlorine. I only swim in the ocean or a lake or paddle in a shallow river. Maybe run through a sprinkler.

I also need to sew a few more t-shirts for this year’s big camping trip. I’ll be doing another one of my production sewing bees starting very soon. More on that (and the planned trip) later.

Meanwhile in my knitting world, I’ve been packing as many projects as possible to take along. Ones that give a lot of knitting time for a minimal amount of yarn, both simple projects that I can work on while we drive and more complex ones for quiet time at the campground. I’m allowing myself only one tote bag plus my usual knitting lunchbox which sits beside me and travels in my backpack. All my patterns are in PDFs in Ruby, my iTouch, with a printout in a binder for backup. We can easily charge Ruby (or T’s iPhone, his MacAir, and my netbook) as we drive. As long as we remember all the assorted cords and plugs of course! Spare rechargeable batteries, charger, camera battery chargers (his and mine are different, doh) and whatever other little electronic gadget we can’t live without. Like his FitBit. Then we’ll know how far we walked and how many hills we climbed. But not how far we drove. The odometer is busted in the old VW van.

And I have a Finished Object! Actually two but the other one is still drying. 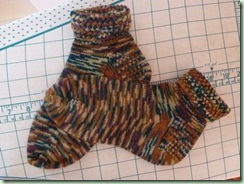 (Did anybody notice that I forgot to post the photo? I think my brains are fried in the heat. Also, the colours aren’t that accurate. Sigh.)

For:  me (Have you noticed I’m indulging in a lot of selfish knitting lately? Or is that totally normal? Heh.)

Mods:  I like my socks tightly knitted so I chose the largest size and used smaller needles. I stopped actually following the pattern past the cuff and ribbing sections. I knit the plain section after the ribbing a little shorter and then went with my usual sock foot, using an Eye of Partridge stitch on the heel flap.

Comments:  This yarn has the reputation of being splitty and it is! I managed to bend my fine aluminum sock needles somewhat in frustration. And made lots of mistakes with the zigging and zagging part. Next time I should just go in one direction, whichever is easiest!

These are very nice and cushy so it was worth all the fussing. They are very cute. However they take days and days after washing and hanging to actually dry. The first time I ended up taking them camping with me wet and left them to dry on top of my suitcase. The second time I left them in the hot sun which worked really well but I’m sure it would fade the colours if I did it too often. Plus finding hot sun around here more than occasionally is problematical.

Right this minute it’s hovering dangerously near that temperature which I refer to as Stinkin’ Hot. It’s much too warm to hang out up in the studio unless I dig out the big swamp cooler fan. We suddenly got summer after several weeks of alternating rain and sun. And no, I’m not complaining. Since it’s the Canada Day long weekend I’m sure the advent of real summer is well-appreciated by the citizenry. Partying is happening – at least by those who didn’t vacate the city. There will be fireworks tomorrow night. I’m not a big flag-waver really but I am most definitely a proud Canadian. I wonder if I can find something red to wear that isn’t too hot! More anon.

love the blue mousie - maybe it should have been red and white!