Well, I still don’t have a mouse. T-Man breathed life into the poor thing a few times but it kept dying again. Sad really. I’ve had it as long as I’ve had this netbook. As I said, I hate-hate-hate-a-dee-hate touchpads! This one at least is awkward and annoying. It’s been raining so we haven’t gone for a walk yet to buy a new one. However, I persevered with this stupid thing and although I don’t have as many photos to show as I’d like, at least I can share my shopping. Because it’s very cool. You’ll see.

But first, I might not have a mouse but I do have a rat! 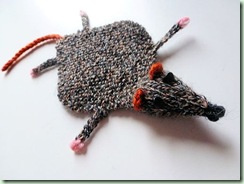 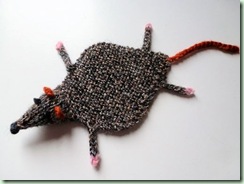 Needles:  Blackthorn carbon dpns, 2mm. Crochet hook (not sure of the size, just the one I keep in my knitting box for emergencies!)

Comments:  Since T stole permanently borrowed my first Flat Rat, I decided to make a second one. I used mostly the same yarns except for the ears and tail which are orange instead of red. She turned out slightly slimmer and more girly! Probably because I used the carbon fibre needles which allow me to knit somewhat tighter than bamboo and a smaller crochet hook. She turned out just as cute as the original.

Here they are at their first meeting: 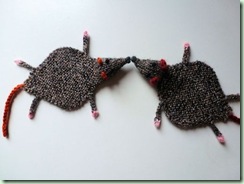 I think it was love at first sight!

In other knitting news, I also finished my Zigzag Anklets socks but I don’t have a photo yet because they’ve already been worn for several days and are in the laundry. The next pair of short socks I’m knitting are from the pattern by Wendy Johnson called Toe-Up Socks With A Difference. It’s a toe-up sock with a flap heel and a gusset which shapes under the arch. I used Judy’s Magic Cast-On for the toe and I needed to check the notes for that because I forgot how to do it! So far they’re going well but I’m going to have to pay attention when I get to the even-more-unfamiliar bits. I’m knitting these out of leftovers so I hope I have enough yarn. I was only making ankle socks so I should be ok with a ball and a half of Kroy.

Back to the reason I started this post. (Awkwardly, with no mouse! sniff!!!) The ANWG conference in Bellingham. So why didn’t I register and take the seminars, watch the fashion show and the keynote speech and actually participate? Well at the risk of sounding like I was bragging or something, I’ve been doing this stuff for a very long time. It can be fun to hang with people who understand my lingo (setts, epi, mordants, cable-ply, itajime…you get the picture). But I don’t really get that much new knowledge out of it anymore. If I haven’t done it already, I probably know about it but am not interested in actually doing it. A lot of the subjects that I am interested in are presented at a beginner to intermediate level. Which is great for most people – but for me it’s just a rerun. Even the keynote speaker I’ve already heard at least three or four times! The social aspect is lovely of course but I don’t have enough in the household budget right now. So instead I spent a little in the vendor’s market and checked out all the exhibits (including the fashion show garments up close!) and had a little relaxing holiday.

The guild booths were rather small this year, except for the Portland guild who managed a larger walk-in display. They were quite well done despite the limited space. Here’s ours: 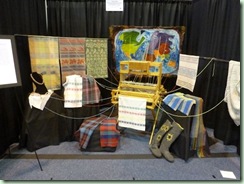 The only part I did was some of the needle-felting on the map. I didn’t even get to help set up because by the time I got there, it was all done! Nice. The conference theme was “crossing borders; crossing threads” so you can see yarns traveling from the woven or felted piece through the loom to the country of inspiration.

Of course I had the most fun with the vendors! I had a little list of items I was looking for, not all of which I actually found. I was disappointed that Newton’s Yarn Country didn’t have the sock yarn that I love for everything but socks. I finally used up the last of the 4 huge skeins that I got at the ANWG in Spokane 4 years ago. Scratch one item off the list. I should have known they discontinued this yarn when they didn’t have any on their website.

At the Eugene Textile Center’s booth I got some of the Habu stainless steel and silk in violet and brick and some crepe twist wool in wine: 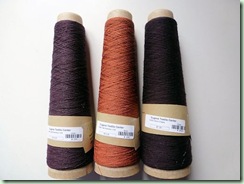 The wool is definitely weaving yarn at 940yds per 28g cone but the steel/silk (311yds = 14g) can also be knitted, usually with another yarn. There are some very cool projects on Ravelry to inspire! I also have a cone in black that I got as a gift ages ago and never used. Yet. I also got the new Spin-Off magazine from this booth.

Next I went a little nuts in Giovanna Imperia’s booth. She has the coolest yarns – kind of like Habu only Italian! I went for the “active” yarns. Here’s my take: 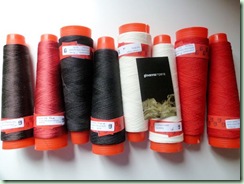 Yes, they are teeny 1 oz cones but the yarns are so fine there’s a lot on them. From the left: elastic silk (silk and polyurethane) @ 1800yds in brown and red, ramie elastic (ramie and lycra) @ 860yds x 2 in nero (black), Italian linen crepe @ 800yds x 2 in white, and linen elastic (linen and lycra) @ 700yds x 2 in fiamma (flame red). I plan to have a lot of fun this winter experimenting with collapse weaving. I should at least get a few scarves or something out of this lot!

And finally, my former teacher and friend Shirley Berlin was there with her delightfully subversive braiding equipment. While T-Man had a great chat with her husband Peter who turns lovely marudais (braiding stools) and bobbins, I perused the goodies while catching up with Shirley. I also found this book which Shirley had edited with her fellow braid enthusiast, Ruth MacGregor, and that Shirley had brought all the way from Britain in her carry-on luggage: 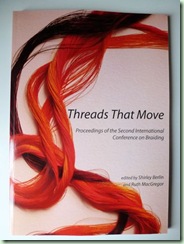 Threads That Move: Proceedings of the Second International Conference on Braiding is published by the Braid Society and is a series of articles on a number of different techniques with illustrations and diagrams. It even has one by the aforementioned Giovanna Imperia on kumihimo with wire! I plan a more in-depth review when I’ve actually had time to read it all.

There was of course a whole lot of other good stuff to buy in the vendor hall but I left it for somebody else! Super-soft alpaca fleece, BFL-silk roving, yak down, light-reflective yarn, giant mohair skeins, Swedish temples (stretchers) in every size, natural dye kits, sparkly handpainted sock yarn, hemp yarn, tram silk…so much yummy stuff, so little money.

While we were in Bellingham we went into the historic district of Fairhaven which was right between our campground and the university. It’s a popular tourist trap area with lots of eating places and a nice wood gallery which of course we had to check out. Along with the amazing Eclipse Bookstore: 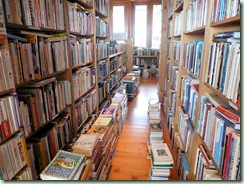 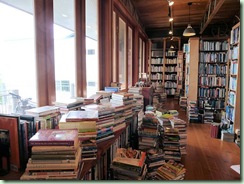 This second-hand bookstore has piles of books everywhere! Apparently there is some kind of order to it but I had trouble figuring it out in the short time I had available. I did find the craft books (at least the ones on the shelves) but they weren’t anything I wanted. I was thinking though that my studio/study rooms are going to start looking like this very soon if I’m not careful…

I did a little more stash enhancement in Fairhaven at the Wool Station. Just because I felt bad about not finding the sock yarn I’d wanted, of course. So I got these: 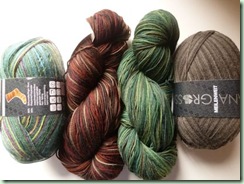 Those are skeins of Cascade Heritage Handpaint sock yarn in the middle which I’ve never tried before but it seems like nice stuff. Hopefully as durable as the Lana Grossa Meilenweit balls since the Cascade is even more pricey. I plan to test it out on my next pair of socks anyhow and it gets excellent reviews on Ravelry.

So that was my shopping experience. I’m done for the moment. It’s taking me all day to post this thing. I miss my mousie. I’ve been promised a replacement tomorrow. Yay! I have to go out anyway, rain or not, to get my hair cut. Later, gators!

love the rat! you expressed my feelings about conferences/workshops perfectly. think we must have been at this fibre thingy about the same amt. of time. even so you did a great job of shopping - and the stash grows.

I'm so glad you get what I was trying to say. I never would have thought that I'd be so ho-hum about a fibre conference! However I love seeing the excitement and enthusiasm of the newbie fibre-obsessed. And I remember when I was one of them way back when. Actually I'm envious. Lucky-duckies have so many resources that we oldies never had - including us, right?

--we've become a resource! My first conference was at Tacoma,I still remember it as one of the best,that and Convergence Vancouver. 2 of my students have just come back from anwg, it was fun listening to there experiences but their shopping was disappointing - they bought 2/8 cotton. With your experience your purchases were much more interesting.

I love Cascade Heritage sock yarns. So far all the socks knit with it are still looking as new. Guess it and Hazel Knits sock yarns are about my faves.

I knew that you loved this stuff, Lynne! That's why I thought I would try it. It ain't cheap though.