The land changed when we drove into Whiteshell Provincial Park at the eastern edge of Manitoba. There were lots of rocks and lakes and trees which segued neatly into Ontario and the beautiful Lake of the Woods. 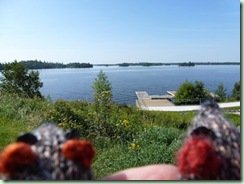 We stopped at Kenora, a city formerly known as Rat Portage, for groceries and also beer and wine at the liquor store. The rats wanted to know why they changed their name from a perfectly nice one to some native name they can’t understand. They wanted a portage! I told them they were always being portaged everywhere. Silly critters.

Got a campsite at Sioux Narrows on the lake and went for a hike up the Lookout Trail. Not much trail and not much lookout. It’s hotter than it has been so far today and we were both very happy for a beer when we got back to camp! There wasn’t much in the way of wildlife around here (apart from the whitetail deer, little brown frogs and the laughing loons) but there was a beautiful huge spider on the window of the washroom. Including its legs it was as big as my palm. So beautiful. 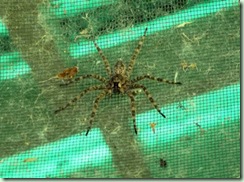 Next morning at the crack of dawn we were off to find the next campsite at Kakabeka Falls, near Thunder Bay. We drove south along Lake of the Woods and many other smaller lakes then east to Fort Frances near the Minnesota border were we got gas. Then carried on again east through the rocks and forest and lakes of northwestern Ontario. I actually thought that Rainy Lake which began next to Fort Frances was even prettier than Lake of the Woods. There are so many little islets and bays on these lakes. They are so different from our British Columbian ones that are usually more of a long narrow swelling in the rivers. These lakes are made by water caught in basins that can’t drain out because of the impermeability of the rocks. There are little cabins perched everywhere. Each lake has a name and they kindly put signs on the highway so we can know them better.

The signs that tickled my warped sense of humour best though were these ones every few kilometres: 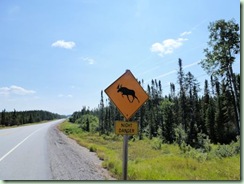 A grumpy-looking tiptoeing moose along with the the words “Night Danger”. I kept picturing a moose sneaking up on us in the middle of the night ready to pull off some nefarious deed. As long as he’s not after my yarn! Haven’t seen any moose though since Riding Mountain in western Manitoba.

Kakabeka Falls is right near the city of Thunder Bay on Lake Superior. The falls are quite spectacular and there’s a convenient boardwalk on either side and over the top so you can get lots of perfect viewing. 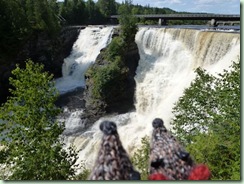 We walked a little way along the Portage route beside them as well. The rats were still looking for the Rat Portage but this was Jacques de Noyon’s Mountain Portage that he traversed in 1688. I certainly wouldn’t have wanted to carry heavy loads up the trail past the falls as the voyageurs did! It was very hot today and it was enough effort just to carry me – and the rats. 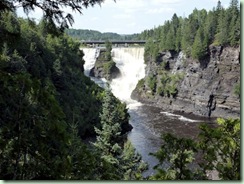 This very pretty waterfall is also used by Ontario Hydro to create power via an underground conduit. They can actually vary the water volume over the falls and they let the most out on the weekends when tourists are more likely to view it. Also the right amounts for the lake sturgeon when they’re reproducing at the base of the falls. Even on an August Friday it’s still very spectacular.

On to Neys Provincial Park on the north shore of Lake Superior. We’re currently making use of the free wifi at the Nipigon Visitors Centre. A large green caterpillar just landed on the picnic table from the tree above. At least he didn’t puff on a hookah and ask “Who are you?” Then I’d really be down a rabbit hole!

Oh yes , we were there too, Kakabeka Falls. We thought Ontario had the best campgrounds of all Canada. Wondering if it has changed since then...