It’s interesting that we’ve been going to sleep nearly as the sun sets and waking up just before it rises again in the morning. We are in the Central Daylight Time Zone, a whole two hours ahead of our own PDT. Somehow we’ve mostly been shifting as we head east. Two more time zones to go before we head back!

Birds Hill Provincial Park is only about a half hour east of Winnipeg but it’s a lovely combination of forests and lakes with a really tame swimming beach (fountains!) and a paved cycle/walking/skating trail as well as horse and mountain biking trails and even a folk festival site. 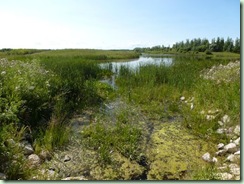 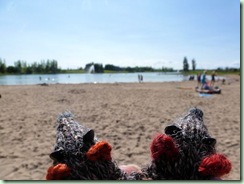 The bugs aren’t half bad either. We were camped in the quiet no-alcohol section (even though T admitted to them that we liked our glass of wine in the evening). There is wifi here just outside the washroom. I know! Such a weird place to put it. At least there’s a picnic table. I’m starting to prefer a local Timmy’s though. I’m beginning to get a taste for the donuts. Bad Damselfly.

We headed north from there up the west side of Lake Winnipeg to Hecla/Grindstone Provincial Park. Hecla is an island where Icelandic settlers had a village and fished the huge lake. This is the biggest body of water I’ve seen yet that wasn’t salty – barring the Great Lakes to come later in our trip. 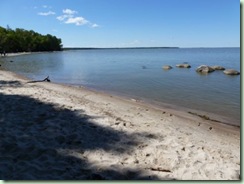 We walked up to the point and then around to Gull Harbour. The Lighthouse Inn is one of the old buildings and is still in business. 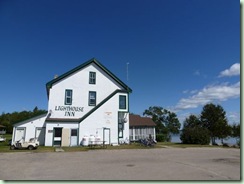 We ran out of ice so decided just before supper to go into Hecla Village to get some at the old general store. That gave us a chance to see some more of the historic buildings in town. Plus we were finally able to get block ice instead of party ice (cubes) which melt much too fast in our cooler.

Tonight we’re back in Birds Hill again at the same campsite we had before. This time we took the opportunity to ride our bikes around the lake on the paved 7.5k trail. The rats wanted to come too so they rode in my Rat Trap. (Of course!) They had a pretty good view from there. 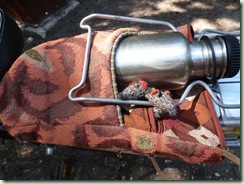 As I’ve mentioned in the past we have bicycles with electric assist. T’s wasn’t working properly so when we got back he took it all apart. Luckily the controller was just damp inside from some of the rain we’ve had. Now we’ll need to secure a plastic bag over it to keep it dry. Mine seems ok. We’ve had this problem before but he thought it was fixed. Obviously not.

So we’ve been out a full two weeks now. Would you like to see our little home-sweet-van’s interior? 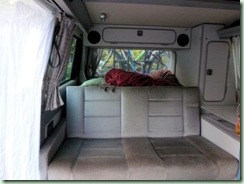 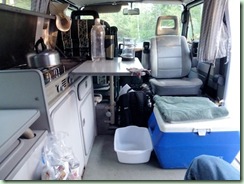 I didn’t even tidy up for your visit! This tiny space is where we spend a significant part of our time. That back seat folds down into our bed and the luggage goes up above us when the roof is popped up. My front passenger seat turns around and the cooler makes a nice footstool. We have a (mostly useless) fridge, a propane stove, sink, cutlery drawer and cupboards that hold food and dishes. We have two tables that swing around. There’s curtains all around including one that snaps around the front area. It’s cosy. Sometimes a little too cosy! We’ve had our VW van for her whole life, nearly 25 years so I guess she works for us. This trip will be the longest we’ve ever gone on though. I’ll let you know if either of us goes squirrely!

We’ll be heading into Ontario tomorrow. A new province! The Flat Rats are excited.

I'm loving your cross country venture and the Flat Rats are behaving admirably! Be sure to wave to us when you're going through Ontario, though I don't imagine you'll be coming this far south? I hope you've put Algonquin Park on your list, it's beautiful there and was my favourite place to camp as a child.