Across Wyoming To Yellowstone

We went west again and out of South Dakota and into our 11th State, Wyoming. It was a very long day of travel and included all kinds of climates and weather. Standouts were the snow we were sprinkled with up in the Powder River Pass (elevation 9,666 feet) followed by switchbacks and incredible rock formations on the road just before a tiny town called Ten Sleep. (I so want to know how it got its name!) Then there was Cody, named after Buffalo Bill, with all its tourist traps facilities where we had to detour around the main street which was blocked off for some western shindig or other. Finally we followed the North Fork of the Shoshone River (which was a breathtaking canyon, but we were too tired to admire it as much as we should) and got a campsite on Buffalo Bill Reservoir just before dinner. Later the full moon made the scene magical: 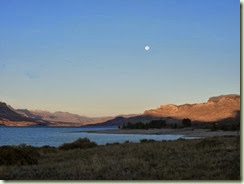 The beauty was a little lost on us because we just fell into bed exhausted after the day’s trip of about 8 hours and 3 gas fill-ups. You know you went a long way when you have to stop 3 times for gas, doncha think?

Next morning however we continued west along the Shoshone Valley and a whole bunch more incredible rock formations and hoodoos: 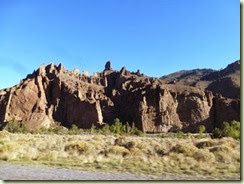 I grabbed a couple of shots while whizzing by without stopping. We were heading for the East Gate of Yellowstone National Park and Sylvan Pass (8,559 ft). There were plenty of signs of snow up there: 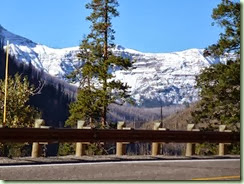 But who would have thought we’d find this: 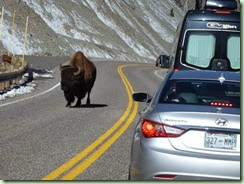 A single bison wandering majestically down the highway wearing a garland of leaves on his brow! We’ve encountered lots of bison on the road before on this holiday but none so high up and so far away from its preferred territory. Plus there were no others around that we could see. We also didn’t manage to see a female grizzly that apparently decided not to cross the highway further on above Yellowstone Lake. The rangers had stopped the traffic (including us) just in case. And lastly, I never did see any elk in Yellowstone – though T did when he went for a walk without me.

What we did see were many of our favourite geysers, hot pools, fumaroles and mud pots. Our first two nights there we stayed at Norris. We walked the mile in to see the Norris Geyser Basin which includes the delicately coloured Porcelain Basin: 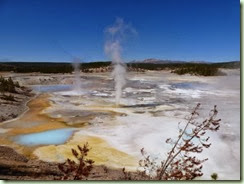 It is so surreal that it looks like no place else on earth! Then we continued to the Back Basin where we found that the gigantic but very irregular Steamboat Geyser had gone off in July so chances were it wouldn’t do it again anytime soon. We also visited all the other hot features around the boardwalk.

The next morning there was frost on the picnic table but we were prepared for the cold, knowing it would warm up later in the morning which it did. We drove down to Old Faithful Village and toured the boardwalks there. We were determined to see Daisy Geyser this time. This is one of the few regular timed geysers and we had missed it over several opportunities last time we were there. We were quite early, but Daisy was 15 minutes early too so the wait wasn’t that long. 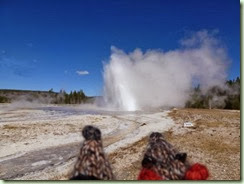 Good thing because the Flat Rats were getting impatient! We also managed to catch Grand Geyser although the wait was somewhat longer: 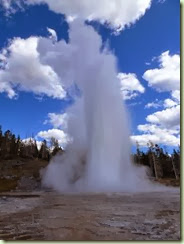 Grand is absolutely spectacular and has several smaller related geysers going off at the same time. It only erupts twice a day (once in the middle of the night) so it’s quite special to see. We were a little nervous while waiting because there was a bison getting closer than was comfortable but it ignored everyone as well as the geysers’ eruptions.

It was probably the same bison I had seen earlier. I call this photo Beauty and the Beast as it rested beside Beauty Pool: 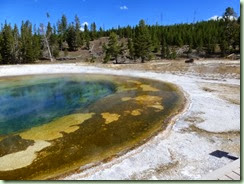 However I think Morning Glory Pool is even prettier than Beauty: 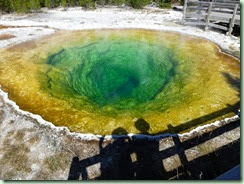 Can you see the Flat Rats in the shadow beside ours? They like this one too.

I got geyser-kissed when Sawmill splattered drops of hot sulphurous water on me as I dashed by. Ouch! I thought it was rather rude since Sawmill is one of my favourites to watch its near-constant play. Another favourite is Anemone: 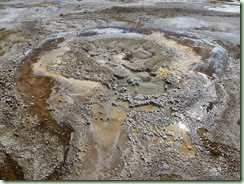 It’s pretty when empty but the two openings (the less-obvious one is behind this one) play off each other about every 10 minutes. They will fill, drain, fill and erupt 3 or 4 feet high and drain again with a sucking sound either together or alternately in ever-changing patterns. We watched them for nearly half an hour trying to find a repeat performance. We completed our day at Old Faithful with an ice-cream cone from the Lodge and a view of one of its regular eruptions. Turns out we had walked over 13 kilometres trying to see everything – no wonder my legs were tired!

On our last day in Yellowstone we managed to get a campsite in Madison which is closer to everything and so much harder to get into. 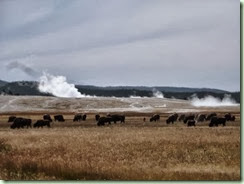 Everybody was photographing the big herd of bison near the Lower Geyser Basin. We checked out the Fountain Paint Pots and watched 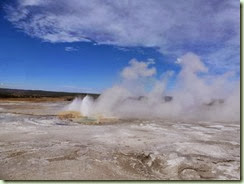 Clepsydra Geyser play for quite awhile. Then we carried on to the Midway Geyser Basin where I tried to photograph Grand Prismatic Spring but mostly only got the bacterial mats and a lot of steam. 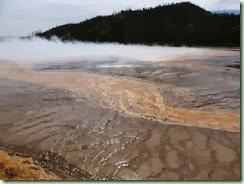 This is the largest pool of all and it’s really a pretty turquoise in the middle shading to green, and then the oranges and yellows and browns of the bacterial mats around the edges. Apparently the only way to get a really good view is to climb up the hill behind or to fly over. We only caught glimpses this time. The delicate bacterial mats are really pretty and very extensive here: 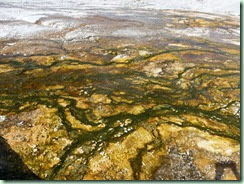 As you can tell, we were really lucky with the weather which remained mostly sunny for the 3 days we were in Yellowstone and is continuing so far. The wind is cool and the nights are pretty cold though. We eventually left for our 12th State, Montana, got groceries in West Yellowstone and drove the rather scenic highway to Lewis and Clark Caverns State Park. More in the next post!

PS Posted when we got home. We found out that we’d just missed a couple of small earthquakes in Yellowstone the day after we left. Our timing was really good, huh?