We’ve been through quite a few more adventures since my last post – even though it’s only been a few days. It seems to be getting harder to keep up and there are definitely few-to-no opportunities to connect to the Internet. No idea when this will get posted but there you go. You gets it when you gets it!

If I can remember that far back, I left you just before we went into Badlands National Park in South Dakota. These Badlands are incredibly beautiful! Here’s the view from our campsite: 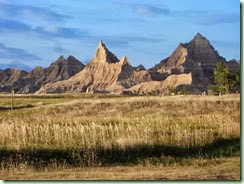 And it just kept going 360 degrees all the way around and with sunsets like this: 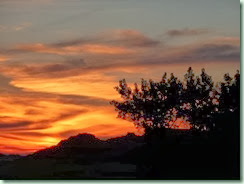 The campground also had lots of meadowlarks and mountain bluebirds to brighten it up and the coyotes yipped and sang loudly in the night. The first day we got there we tried one of the shorter trails called Door: 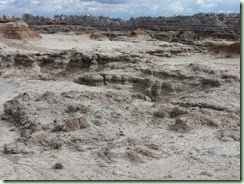 Do you see the trail? Neither do I! We had to follow these markers: 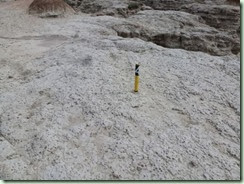 Until we came to the end: 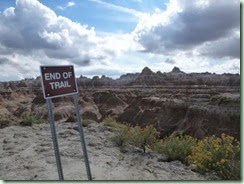 Yes, there was a sheer drop off after that! It was fun and not quite as hot as it could have been. We also checked out Window and Cliff Shelf but did not climb up Notch – too steep for me. It had rained recently and anywhere that was damp was really slippery. It dried quickly in the sun so later walking was much easier.

The second day we drove along the scenic loop road toward the western end of the park. We saw prairie dog towns: 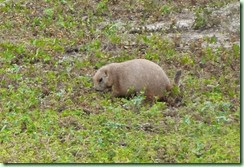 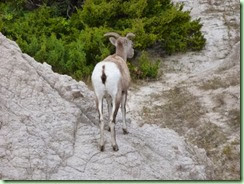 We didn’t see any of the resident bison though. The rocks gave a different view at every turn. 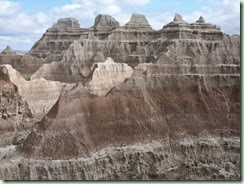 The rocks were as if someone had cut into a gigantic layer cake. Some were coloured from the fossils of ancient sea creatures and jungle plants: 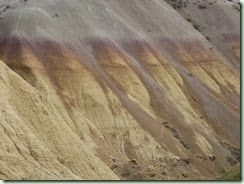 Absolutely fascinating. Photos really don’t do any of it justice.

After two days at Badlands we headed west and a little north to the Black Hills for more adventures. We saw herd after herd of pronghorns as we drove by below the Badlands and then up into the hills. After squeezing through the multiple tourist traps that make up the small town of Keystone and nearly running over a wild turkey in the road, we found a pull-off to view the very famous Mt Rushmore: 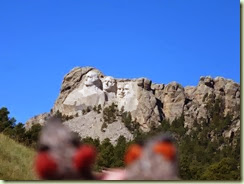 Then we drove down the exciting Iron Mountain Road around a number of “pigtail” bridges where we were chasing our own tail in a loop and through several single-car-sized tunnels: 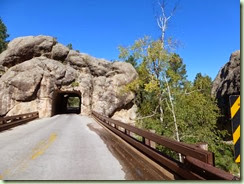 You could even see Mt Rushmore framed neatly in a double one (but our very hasty photos didn’t turn out). It was not for the faint of heart or large of vehicle!

We had decided that we needed to go first to Jewel Cave National Monument, which wasn’t really on our original itinerary but was totally worth the trip out and back. The cave tour was about an hour and a half guided by the friendly and knowledgeable Lydia and began and ended with an elevator ride. These photos were taken only with the available lights in the cave, no flash: 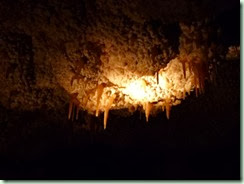 Little stalactites. And this feature is called cave bacon, really! 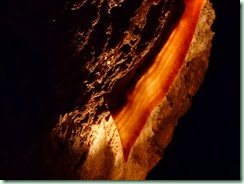 That’s just the end of the piece – the whole thing is 20 feet long and about an inch thick. Most of this cave is covered in textured calcite deposits: 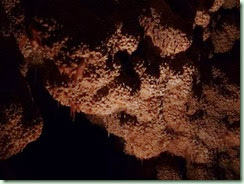 I’ve got lots more dim photos but I won’t bore you with them. Right after Jewel Cave we went down to Wind Cave to camp overnight. We nearly literally ran into a herd of bison on the road in! Plus we heard several male elk bugling in the night. The wildlife here is an interesting combination of western and eastern versions as their ranges overlap. Apparently they have eastern bluebirds and mountain bluebirds, yellow and red-shafted flickers (and even intermediates between), and white tailed and mule deer. We saw a group of the latter this evening with their big animated ears grazing in the campground among the ponderosa pines. Things are starting to feel familiar!

It was interesting to compare Wind Cave to Jewel Cave. They’re only 18 miles apart and at slightly different elevations but quite different in feel. Our ranger guide this time was Clayton, who made it all quite dramatic. Here he’s showing us the original natural entrance to Wind Cave: 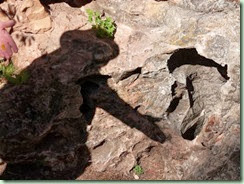 It’s even smaller than it looks – only 8” x 12” just inside the opening. Luckily we got to take a much larger revolving door instead! Teeny spaces are not my thing though the ones we went through were definitely smaller than the tour at Jewel. The formations didn’t have the thick layer of calcite crystals. 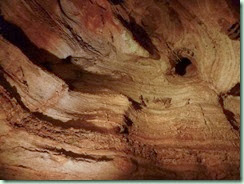 There weren’t any stalactites or ‘mites at all. But this beautiful formation called box-work was everywhere: 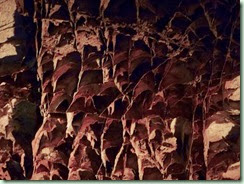 Apparently it’s very rare and Wind Cave has most of it found in the world. There were some sparklies like these “frost” crystals: 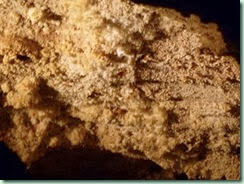 But mostly it was just fascinating rock formations and narrow passageways. Loved it all! This isn’t our last cave adventure either. We’re planning to go back to the Lewis & Clark Caverns in Montana after Yellowstone, which is where we’re heading for next. Sorry we couldn’t do or see absolutely everything in the Black Hills. There’s just so much here! More caves. Mammoth fossils. Crazy Horse. Deadwood. We’ll just have to come back again some day.

This unfortunately couldn’t get posted until we got home. But here you go anyhow. More anon.