When we left Whycocomagh it was very windy and a bit drizzly. We caught a little cable ferry over Little Narrows and a bridge over Grand Narrows and drove to Iona to the Highland Village Museum, perched up on a high bluff. The weather was kind and didn’t rain on us while we followed the trail along a timeline from the crofters in Scotland, to the migration across the sea to Nova Scotia, and into the 19th and early 20th Centuries.

The Museum also has some rare breeds such as Highland cattle and these Soay sheep: 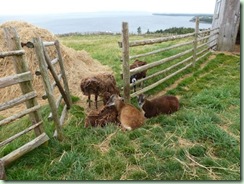 We really enjoyed the exhibits and the re-enactors in each building. We pretended to order something from the catalogue in the general store. We got a nail made for us at the blacksmith’s shop. There wasn’t anyone in the carding mill but they had some lovely old carding machines: 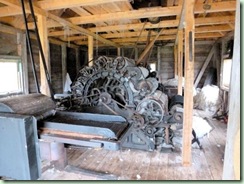 I especially love the fine fibre trails hanging from the rafters! They had a video available about the process but of course I didn’t need to see it. Not like I don’t know how it’s done, eh?

I will mention that the Museum had The Best WiFi Connection I’ve had so far this trip. I could get it from the parking lot while we ate lunch and looked at the view. The thing actually worked so I even got my email. I was so happy! Do not expect that again anytime soon.

After the museum we carried on up the east coast of the Bras d’Or and east some more to Mira River Provincial Park, just a short hop from the Fortress of Louisbourg. It was windy and rainy and perfectly awful weather! We didn’t see much of poor Mira River but it looked like a nice place. We got a campsite in the trees where we were a little bit out of the wind. It was a noisy night anyway and hard to sleep between the gusts of wind-carried rain going sideways along with leaves and twigs landing on the roof.

Next morning the weather was a little improved, kind of drizzly but not too bad. We drove to Louisbourg and went through the little town to park in the Fortress parking lot. Here’s another place where we saved a lot of money by having our Discovery Pass that we bought way back in Waterton National Park in Alberta. It’s almost paid for itself twice now! We were surprised that we actually had to take a bus to the fortress which is several kilometres from the visitors’ centre. And it was a fantastic experience! 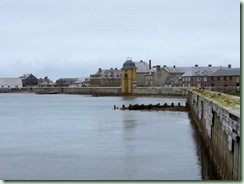 We were greeted by a “fisherman” who told us there would be guns firing at noon and also by a guardsman at the gate. There are at least a dozen buildings with re-enactors in them and it was really fun to see them slip in and out of character as they answered questions from everyone.

Here’s just before the firing of the gun: 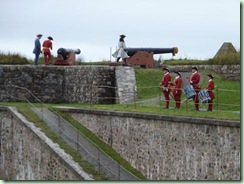 I checked out all the costuming and as far as I can tell it’s quite well done. Proper colours for the uniforms and close-to-realistic fabrics. Some of the “boys” were girls but we won’t fault them for filling in! At one point I heard sheep baaing and followed the sound to an enclosed yard: 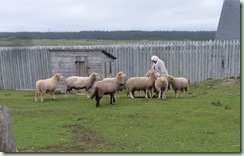 The shepherdess was berating her sheep for being greedy and they tried to follow her out the gate, complaining all the while. I think the sheep were well-rehearsed!

We bought a cobblestone-shaped loaf of bread from the bakers and watched yet another excellent blacksmith next door: He made a lovely iron leaf and explained what he was doing every step of the way. After several hours we had explored pretty much all we could and because we still needed to get west and north to the Cape Breton Highlands National Park, we left. But before we headed off we went back through Louisbourg and out to the point which was the site of the oldest lighthouse in Canada. Today there is a relatively new one – think it’s number 4. On the way we were watching for a beach where we could do the transfer of water because this was the farthest east we will go and the only piece of true Atlantic Canadian shore. It was much too wild at the lighthouse to do it! 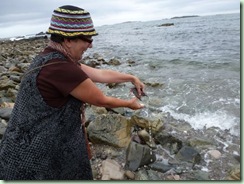 The Flat Rats and I hovered at this rocky shoreline waiting for a break in the waves and poured out the Pacific water that we’d dragged all the way across the continent. Then I tried to refill it! The waves were getting more chancy and I managed to get wet while nearly filling my boots with sea water, never mind the jar. 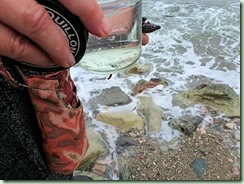 And also nearly drowning the Flat Rats in the process! Now we have a jar of Atlantic to come back with us to go into the Pacific when we get home. We won’t mention how many gorgeous rocks I also have collected. A few, ok?

After that, my pants were wet and we were both past hungry into starving. Time to have our first ever Nova Scotia lobster! Yay! 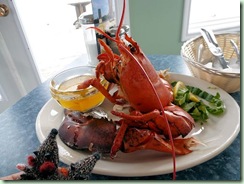 No, the rats didn’t get any. We ate every little bit! A lovely girl (from Alberta, truly) helped us learn how to demolish it. Really it’s very like the Dungeness crabs we’re already familiar with from our sailing days. We even had Nova Scotia wine with it and a lot of stuff from the salad bar. And didn’t leave anything at all but a little leftover garlic butter: 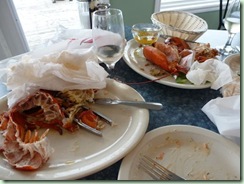 Yum! Now we can’t say we missed the lobsters though I bet it would have been a LOT cheaper off the boat. Oh well. I wasn’t going to cook a lobster in the van. Nope. We’d be smelling back to Vancouver.

Right after our delish crustacean we headed west toward Cape Breton Highlands National Park. We passed Sydney and took yet another cable ferry: 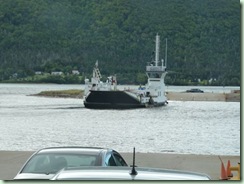 This one was across St Ann’s inlet. We travelled around and up steep Smokey Mountain where the Flat Rats became momentarily airborne! The road was very exciting! We easily got a campsite in the nearly-empty Ingonish Beach campground in the National Park (saving yet more money with our Discovery Pass). And we were pretty tired by this point so it was very good to call it a day.

The weather the next day was fine and we had already decided to stay another night at Ingonish Beach. After breakfast we went for a very very long walk out toward Middle Head, which we never did quite reach. That point out there. 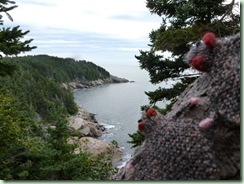 Most people start at the parking lot past the Keltic Inn but not us. We walked an extra couple of kilometres from the campground. It was warm and very humid too. Whew. So near and yet so far. Over 11k total anyway which is a lot for us. Plus up and down.

Our last full day in Cape Breton we travelled around the Cabot Trail from east to west. Unfortunately the weather was back to drizzle and fog and eventually rain. We didn’t see as much as we would have liked but we did visit a grove of 350-year-old sugar maples and a reproduction Scottish crofters’ shieling. Also at least six seals playing together at the mouth of a small river in the surf. The coastal rocks all around are beautiful red granite. 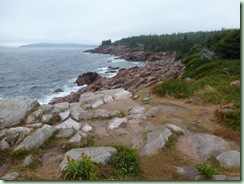 We camped in little Corney Brook campground right on the sea (actually the Gulf of St. Lawrence again) and watched the gannets fishing. Love how they dive right into the water from a height and splash in to catch their fish. The weather wasn’t so bad but deteriorated into rain for most of the afternoon. At least it smelled like the sea and we can hear the waves.

Yesterday we drove down out of Cape Breton and across most of Nova Scotia heading back towards New Brunswick. Last night we spent at Five Islands Provincial Park and tried to watch the huge tide go out and come in again in Minas Basin, part of the Bay of Fundy. Unfortunately the clouds and rain set in and by morning it was blowing up a storm. We left and travelled up to cross over into New Brunswick where the weather immediately improved. Hopefully it will stay that way but I wouldn’t count on it!

Currently we’re in a Timmy’s in Dieppe, a city next door to Moncton, NB. We’re stocked up on groceries, propane, gas, ice and Timbits! All we need now is wine. We’re on our way to see the Hopewell Rocks at low tide and then to Fundy National Park for a couple of days. No idea when I’ll be able to post again because after that we’re heading across the border to Maine. Even though we’re a tad damp and a little annoyed about the things we’ve missed, we’re still having a good time. You just can’t see and do everything, can you?

Have enjoyed your summer travels this year, wishing I had a vehicle that would work for a trip like that, but alas not likely to happen. So I see everything thru your eyes. Thanks.

You finally were able to have lobster! :-)