Since my last post had a quick addendum while we sat in the Timmy’s in Dieppe, I’ll back up to Five Islands Provincial Park, on Minas Basin in the Bay of Fundy, Nova Scotia. As I said the weather here started out iffy but cleared up just long enough for us to go for a walk. I love this sign: 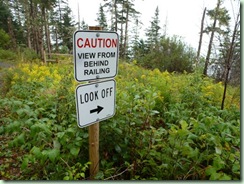 For some reason the Maritime way of calling it a Look Off makes me giggle! We call it a Look Out or a View Point. Whatever the term, here’s the view: 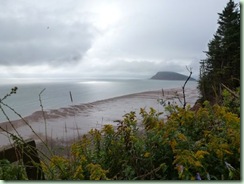 The crazy-low tide wasn’t quite all the way out yet. Later it socked in with fog and rain so we wouldn’t have been able to see it anyway.

Next morning it was incredibly bad weather, with wind and rain so hard that it washed some of the gravel roads into the main highway. We packed up and left with everything soggy but at least it wasn’t at all cold. It was a stressful drive with the blasting rain until we got to New Brunswick.

After our shopping and other errands were completed we drove down from Moncton to the Hopewell Rocks on the Fundy coast. We were rather late by this point and they were going to close the gates so it was suggested that we park outside them. Because low tide wasn’t for another hour after closing we were perfectly safe to go exploring on the exposed shore. We headed quickly down to the Flower Pots. These are like hoodoos of worn rock with caps of harder rock, bushes and even trees. So cool! 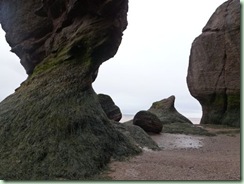 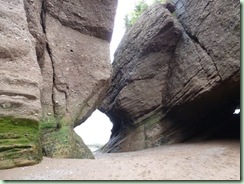 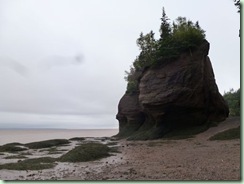 There were caves and arches but a lot of the more dangerous areas were blocked off. We didn’t see much shore life except periwinkles and this lovely green crab which mistook my boot for a rock to hide behind: 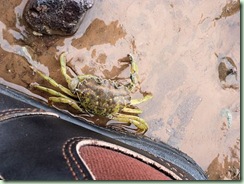 The Flat Rats decided that the seaweed would make a nice bed: 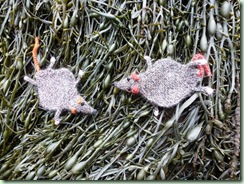 I managed to convince them that it would be a rather wet bed after the tide came in!

We happily spent a couple of hours exploring before we had to head to Fundy National Park where we were camping. By this time it was quite late. Unfortunately we made the mistake of going down to the Point Wolfe campground which was closed so we had dinner in the parking lot. At least we got to go through the covered bridge: 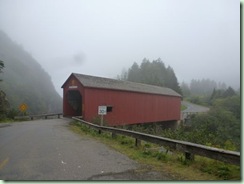 This isn’t an old one but was built in 1992. We did see two old ones on the way down from Moncton though, one very old one out of commission and one still being used.

We finally got settled in Fundy at the open campground but the weather was still pretty gloomy this morning with fog and drizzle. We went back through the covered bridge and went for a walk along a boardwalk and down to the foggy beach. Later it cleared up and finally we saw the sun so we could dry out. We walked into the little village of Alma for ice. The boats on the Upper Salmon River have to settle on props when the tide goes out: 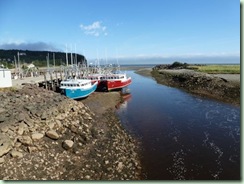 They float again at high tide. Have to time your fishing trip carefully!

We’re off again tomorrow to Acadia National Park in Maine. After that it will be west toward Niagara Falls. Currently sending this by the wifi in our campground. I hope. I’ll leave you with this image: 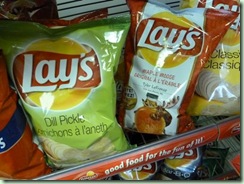 Yes, besides the Dill Pickle chips those are actual Maple Moose chips! I love the Maritimes.

Definately going to have to plan a trip to the Maritimes in the future. Been to Halifax a couple of time but I flew in.

The Maple Moose chips are a contest / experiment by Lays. There are three other flavours in the contest. You can buy them here as well. :) Sorry to burst your bubble on that one. Hazards of working in a grocery store I guess. ;)