Falling In And Out

When last I posted we were on a New York interstate toll highway on our way to Niagara Falls. We managed to see quite a lot of the top of the falls on the US side by taking the scenic parkway before we crossed over another border crossing in the middle of the Rainbow Bridge. It was relatively painless (apart from the tolls everywhere) – we didn’t make any wrong turns and the border guard (female) wanted to know more about our van and our trip than about anything we were bringing back into Canada. The Canadian side was much more spectacular and we walked along on the view wall for plenty of photos. Saw both sections of the falls and lots of mist and rainbows. 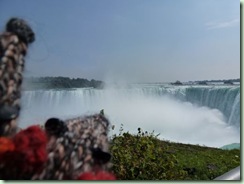 Here’s the Maid of the Mist with its passengers all in blue slickers. 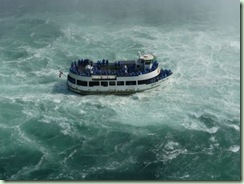 Nearly left in annoyance but finally found where they hid the Journey Behind The Falls and went down in an elevator carrying our souvenir yellow slickers to the tunnels.

They were rather damp and noisy but kind of unspectacular until we got out onto the decks below the lip of the Rainbow Falls (Canadian side). I had taken off my slicker because I was suffocating in hot plastic and wetter on the inside from perspiring so I got completely and refreshingly soaked from the spray off the falls! Managed to keep the Flat Rats dry because they weren’t too excited about getting wet. Kept the camera dry too so no photo. Disappointed that the souvenir photos the concession took on our way in were both unflattering and very expensive at $25 for two different ones so on the way out we unanimously declined them.

Off again down the road to our provincial park for the evening, Rondeau on Lake Erie. It was another interminable trip on freeways and dancing among the big transport trucks. We didn’t get in until late and the registration booth was closed so we just settled in, did 2 loads of laundry, had showers and supper and repacked the Black Box which had water in it from that morning’s rainstorm. We left again very early before they opened in the morning so if they’re not going to supply us with self-registration envelopes and a secure drop-box instead, they are out of a payment. It would have been nice to explore the park more but the bugs there were seriously annoying. The little bats we saw were just not keeping up! Before we could stop them, the van was filled with flies and mosquitoes who nibbled on us all the hot and humid night long.

Woke up to our theme music alarm in the dark and got going relatively early while enjoying a gorgeous sunrise over Lake Erie as we drove by the shore. Yet another long drive on freeways, which included rush hour in Windsor, incredible numbers of big trucks, another toll bridge with the US Customs at the end of it just before the toll booth and two separate freeway entries right after. The border crossing took awhile but was quite easy with a slightly less-tough-than-usual guard. We made a little blunder on the Detroit freeways (which wasn’t hard to do!) and missed a turnoff because of traffic but managed to find a way around it. By that time the bad morning traffic had chilled some anyway. Didn’t really see anything of either Windsor or Detroit. You usually can’t see much of anything from freeway corridors and we drove all the way across the whole state of Michigan viewing only trees, billboards and the occasional rest area. Kind of boring actually but it gets us west much faster than meandering side roads. We’re both feeling rather sick of freeways but we’re considering this part of the trip a challenge rather than the pleasure it might have been.

We didn’t find a grocery store anywhere today (fast food doesn’t count) so we’re on our last supplies. However we finally found Van Buren which is a state park on the sandy shore of Lake Michigan. Our 5th Great Lake – and the 3rd one in three days!

The area has dunes and at first glance is reminiscent of the Oregon dune area that we’re very familiar with. 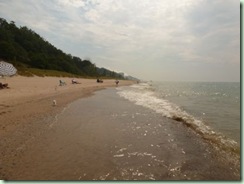 As usual it doesn’t smell like the ocean. There are mussel shells, pretty pebbles and waves but no salt, seaweed or tide. The Flat Rats found a little piece of the Yellow Brick Road: 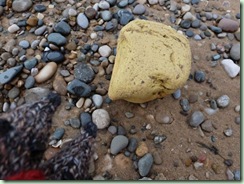 They were wondering where the rest of it was and what happened to Dorothy? Hoping the Flying Monkeys didn’t have anything to do with the mystery. We’re all scared of Flying Monkeys.

The campground is nice and electricity is in every site so we could plug stuff in. Frighteningly we discovered it’s situated right next to a nuclear power plant. Um, lovely. 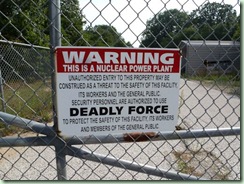 We’ve seen mourning doves, flycatchers, pebbles, Petoskey stones (a fossil coral gemstone) and beach glass. The mosquitoes were still biting but the bugs were certainly better than Rondeau Provincial Park. The weather was still hot and humid with high cloud that thankfully muted the sun a little.

The health of our old Volkswagen Westphalia, both our transportation and our home, remains good. Happily she has been working well since her blood oil transfusion. We’re quite confident that she will get us home now. However, I’m still dreaming of maps every night! Can’t guess why.

I’ll be starting a new post but will have to post them together whenever I manage to find available wifi. It seems to be less common anywhere here in the mid-US except at motels. Humph. We don’t have time to hunt for it.