More Dancing With The Trucks

Yet another long freeway drive (nearly 7 hours) from Michigan around the foot of that Great Lake, through a sliver of Indiana, by Chicago at rush hour (yikes!) and west in Illinois and then northwest into the middle of Wisconsin. Four states in one day! By far the worst part was the toll freeway that started just past the Indiana/Illinois border south of Chicago and went north and west by that city and we only caught a smoggy glimpse of its high-rises. Instead of the system like New York’s where you get a ticket when you get on and pay whatever you owe when you get off depending on how far you travel, this one had you stop every 10 miles or so and pay again. And again. And again. They do have a transponder system but of course we didn’t have one so had to go far over to the right each time to the gates where you can pay cash. I’d check the payment sign (mostly $1.50 but once a much as $3), fish out the cash, hand it to T as he was rolling down the window, he’d hand it to the cashier in the toll booth, they’d lift the barrier and we’d be off again and back out in the crazy truck traffic. We’d lost track of how many times we did this tricky feat but it was at least 8 times for approximately $15 total. We were starting to get quite deft at it by the the time we got to the Wisconsin border north of Rockford and the end of the toll freeways.

Maybe we wouldn’t have minded the tolls so much if the traffic wasn’t bumper to bumper with a gazillion transport trucks and everyone coming and going, on and off ramps, very fast. We had to change several times to stay on the right road. Then one whole section of over 30 miles was under construction and we couldn’t go faster than 45mph. It took a great deal of concentration and patience on both our parts just to make it out of Illinois in one piece! We treated ourselves near the end to delicious gyros when we stopped for lunch and gas at one of the “oases”. These rest stops are built over the toll freeway and are like a mall food court. No wifi though sadly. At least our lunch break gave us the fortitude to carry on.

Wisconsin was much more relaxed thankfully and we finally found Mirror Lake State Park even though there was no signage from the main highway. It was very quiet and peaceful after our crazy day. I was photographing many of the trees, very few of which are familiar, for later hopeful identification. We walked down by the lake and then to an interesting sandstone rock formation, Echo Rock. 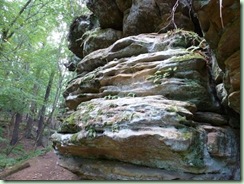 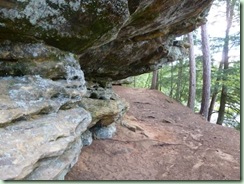 The trail went all the way around its edge. The weather was much cooler than it had been further east and less humid too. So much more pleasant to travel in.

Even though we were pretty tired of long travel days we decided that we would press on the next day anyhow. So we continued across the western half of Wisconsin and crossed the bridge at La Croix over the Mississippi River into Minnesota. The highway followed the river for a short way north but then turned west again over a few mountains and across the prairie which was kind of boring with hardly anything but corn and soy fields everywhere. Our chosen state park was Blue Mounds, a long high bluff in the middle of the farmland. The campground is tucked in among shady trees though we could see the cornfields from our spot. The first evening was warm and sunny and we walked out to see if we could see the park’s resident bison herd. Nope. It was nice to stretch our legs after so much driving though. The Flat Rats found a nice bed: 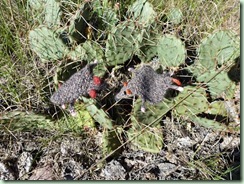 OK. Maybe not so nice!

The park had a really nice paved bicycle trail so after breakfast next morning we decided to try it out. When we got to the park office the bison were moving quickly away from us behind their fencing. 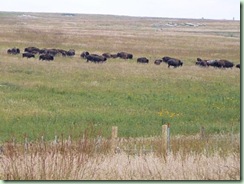 If we’d been a few minutes later we probably would have missed them entirely. This is our third bison herd this holiday but likely not the last. Too bad I can’t get any of that luscious bison down but I’m not about to get that close!

The Blue Mounds were called that from the way they looked from out on the prairie. Up close the rocks are Sioux quartzite in a beautiful range of pinks, reds and purples. We investigated the old quarry: 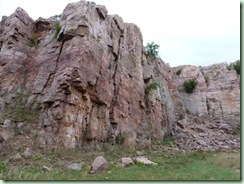 From 1919-1937 the rock was used for building but mostly for crushing to use in concrete for highways in the area. It’s very hard and durable and just lovely. 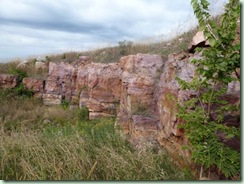 In the 1960’s author Frederick Manfred built a house up on the bluff from the quartzite and other local recycled materials. It snuggles right into the stone behind and commands a view of the prairie and the town of Luverne below. 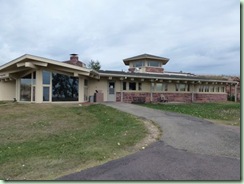 The park uses this house as a nature centre but it’s currently off season and closed. We peeked in the windows and there’s a fabulous huge stone fireplace that must have heated the whole thing nicely.

We were glad to get back to camp before it rained more and the wind picked up quite a lot. An enforced rest is very welcome! Today we’re in our 10th state, South Dakota, and right at the entry to Badlands National Park. Happy to borrow some free wifi! And then it’ll be Mt. Rushmore and the Wind Caves. It should be relatively easy sailing from here on now that we’re beyond the most populous areas and there’s less traffic on the highways. More in the next post from Who-Knows-Where!

Hey, I waved at you guys from Chicago during rush hour! Too bad you didn't stop for tea here. So close and yet so far away...

I've done that drive around Chicago, it is nasty! And I have also enjoyed Badlands park, some breathtaking views (and bison!)And I remember Mount Rushmore being smaller than I thought it would be - it will be interesting to read your thoughts on it. Drive safe!