Well, it’s been awhile hasn’t it? I didn’t mean to get lost but you know how it is when you are trying to finish something with a deadline. I had a mostly-unbloggable secret project to complete in a very short time. It was a test knit for a friend’s business and unfortunately it had to be completely rewritten and recharted as well as knitted up. BIG job. All I can show you (without explicit permission) is this detail: 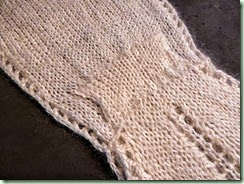 You are free to infer anything you like from this. <snicker!> I will tell you that in the process I was very excited to learn how to make that cool little tubular section using double-knitting. And to write the directions out in terms that hopefully will be clear! I swear I’m becoming a total knit-geek.

To further that end I signed up for the Craftsy class on pattern writing, How To Say It: Pattern Writing for Knitters with instructor Edie Eckman. Even though I got a discount it still used up a goodly chunk of my payment for the test knitting but it was totally worth it because it was immediately helpful! In the class materials Edie provides a style guide that gave me several useful hints and I got even more good information from reading some of the student/teacher chat. And that’s all before I even watched the class lessons! Who knew that I, The Original Math-Phobe, could get excited about making sure all the pattern numbers added up correctly?

The other item that came in handy on this job is the Knit Visualizer software. It was indispensible in creating the 3 large charts that I needed. I know you can use something like Excel or even Word to create knitting charts but this program does make it easy. Especially since I had to knit samples, erase chart stitches, move them around and count and re-count before it was all correct. Whew.

Sadly although KV is still being supported, it hasn’t been upgraded since 2008. It was the best tool at the time I got it but there are other excellent options now. And truthfully potential users are not expecting to pay nearly $200 for software any more, especially one that is still slightly glitchy. Not when they’re used to buying a $.99 app for their smart phone! Not that I begrudge a programmer their honest due but business-wise you have to at least try to balance price with volume. Especially when you have worthy rivals in the same field for half that price or even less.

Stepping off my soapbox now – before I fall off!

So what else haven’t I shown you yet? 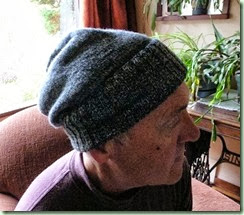 Comments: This is the third time I’ve knit this pattern and I used the same modification. T liked my Darkness Slouch Hat which he borrowed during our trip so I made him his own version. When it was done he wouldn’t take it off and wore it for hours – indoors! Perhaps I should have made the hat in red and then he could be my Tomten? Somebody might mistake him for a garden gnome though, so maybe not.

I also finally finished this: 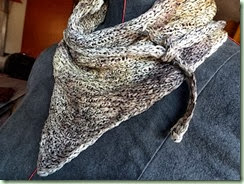 Mods: Since I couldn’t get near to gauge because my paper yarn is thinner and less substantial than the viscose-coated Habu paper yarn, I added more repeats to the centre point area and a little more to the second tail. It came out just about the right size. Any fudging is lost in this asymmetrical design. Comments: Another use for my endless cone of Korean hanji paper yarn. I eco-dyed the scarf after knitting. Soaked in alum mordant and placed maple, Japanese indigo and purple plum leaves over then wrapped in plastic wrap and steamed for an hour or so. The plum leaves gave the deepest colours but it’s not as bright as I had hoped it would be. I think the paper knit is too thick. Also some of the black dye came out of the silk when I was mordanting (even though I kept the temp quite low) so it turned the white paper gray which dulled the whole effect even before I applied the leaves. I didn’t really like the results at first but it grew on me.

This is a pretty tiny scarf, more of a neck warmer and actually a very quick knit. I just didn’t bring it with me on our trip so it didn’t get finished until we got back. I could say I was waiting for the leaves to turn, couldn’t I? It’s more comfy to wear than one would think and quite toasty. I still have some of the silk/steel yarn left possibly for a weaving project. And of course there’s still lots of the hanji paper yarn left too!

So here we are! It’s a lovely day out today. For the last couple of weeks we’ve been having fog from the evening overnight and all the way to noon or even later before the sun finally burns it off. The ships in the harbour keep sounding their horns to keep others from hitting them. We are kilometres away but they are loud enough to wake me up at 6am! (Hate to think how loud they are down by the water.) Today though we escaped the foggy morning, at least here up above. I’m going to head out to the garden and see if I can get another bed or two cleaned up and tucked in for the winter.