Hello, my darlings! I've had my nose to the grindstone...er, fingers to the needles finishing up my current sweater. I even got it done before it was too warm to wear it! To wit: 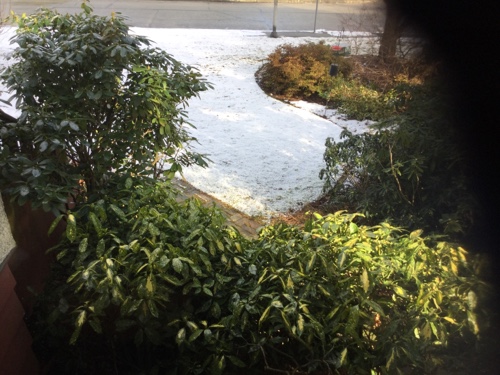 Yes, that is snow. Again. Winter is just not giving up this year! Yeah, the sun is out now and most of this stuff is melted. Again. But it is nowhere near as warm as it usually is at the end of February. Or maybe it was just the last two unusually warm years that made me forget? Anyway, I'm quite done with this winter thang, just sayin'.

So on to the sweater! Behold - the Licorice Tunic Sweater:

The prep and spinning of the bulky chain-plied yarn took more work than the actual knitting, though the sweater's finishing was, shall we say, a wee might tedious. Pattern is Ebony by Cristina T. Girlanda (aka Minimi Knit Design) and I bought it from her Ravelry shop in an e-book collection called Grayscale but it's also available separately. I'm quite liking a few of the patterns in this bunch. Cristina's patterns are well-written and properly tech-edited so a breeze to follow (even if I did change it a little). Ebony has all the details the savvy knitter needs including suggested ease, schematic, size comparison chart (XS to 2X), abbreviations, stitch guide and an appendix with instructions for the sewn bind-off (which I didn't use). 7 pages in all so no skimping on information.

I only made one major modification: beginning from a size L and decreasing down to size M at the bust. That took a lot of drawing diagrams and plying the calculator but I think it worked out OK. It would have been too tight in the hips and tummy area if I hadn't done that. It's a common fitting issue for me. A minor mod was picking up more stitches on the stockinette part for the collar (1:2 was too few stitches) and picking up less stitches on the armhole bands (2:3 worked well all the way around).

I was seriously running out of yarn by the end but was totally reluctant to spin more! So I used up all my 3 sample skeins (not the swatches though) and did a fair bit of joining and just managed to get it all done. The first sample was more twisted and a little finer and it worked great to sew up all the seams. Of which there were MANY! Not to mention the sewn bind-off. I hadn't used that technique before so I found this PDF page of photo-illustrated instructions from Desert Rose to be very clear. It seems there is more than one way to do Elizabeth Zimmerman's sewn bind-off but this one works really nicely with the garter stitch.

From this pattern I also learned a different way to do a cable cast-on. I originally learned just to place the new stitch directly onto the left needle but this method has you twist it as you transfer it to the left needle by going into the new stitch from the back (explained as "right to left"). It makes a slightly more firm and durable cast-on. Which of course I worked too tightly the first time around and had to frog and do it again. Now I quite like this one for hems that you don't want to flare at all.

I love my new tunic! It's toasty and covers all the areas that tend to feel chilly: neck, back and tush. I may not take it off again until spring really shows up! Oh, and I was rather over-generous with my wool supply for this project. It wouldn't have taken me so long to prep and I would have had plenty if I had only carded half as much. Yes, I have over 600g of beautifully carded black wool with white speckles left unsound. I probably will spin this quite a lot finer though since I'm not the biggest fan of bulky weight wool yarn. I get a lot more wear out of my finer weight sweaters. At least when we have a more normal winter - without the horrors of what locals are calling Snowmageddon and Snowmageddon II. Wimps! Oh, guess that would include me too, huh? I certainly complained along with everyone else, didn't I? Heh.

I've now vacuumed up the worst of the black dust buffaloes that were roaming about my studio and study on what seems like every surface. So what's next? I'm already knitting away on the Isabel Likes Cappucino cardi (more on that soon) and the socks for Thom are also coming along. The woven blanket that I started eons ago is still sadly in limbo and I have a metric tonne of mending and ironing waiting for me. (I've been studiously ignoring it all.) I'd like to actually sew some new clothes but it seems that all I can concentrate on lately is wool-wool-wool! Maybe it needs to warm up first before my hands will consider working with cooler fibres. I wonder if this means we'll have a hot summer? Just in contrast.

That's what I need in my cold, cold office!!!! But, I also want some thick - I mean thicker than longjohns - leggings to wear with it!!! My knees complain unless I cover them with a blanket so I'm wishing for THICK leggings.