Sigh. Remember the last post where I was complaining about winter never leaving? Guess what I woke up to this morning? 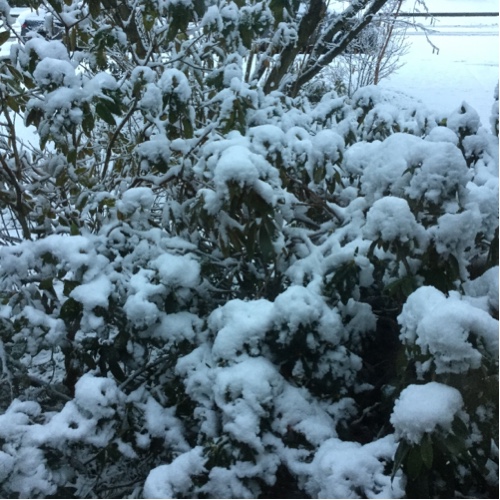 I'm sure you can imagine the expletive I let out when I saw this! It's still snowing though now it's mixed with rain and melting nearly as fast as it's falling. There's a good inch or more remaining on top of the crocuses and snowdrops though. Please. Go. Away. Now.

In other news I've been concentrating on spinning up the Corriedale that I snow-dyed awhile back. I'm calling it "Late Winter Fields" - aka MUD! Though the colours are quite subtle they are intriguing me so I'm finding it hard to stop. This was a couple of days ago when I began: 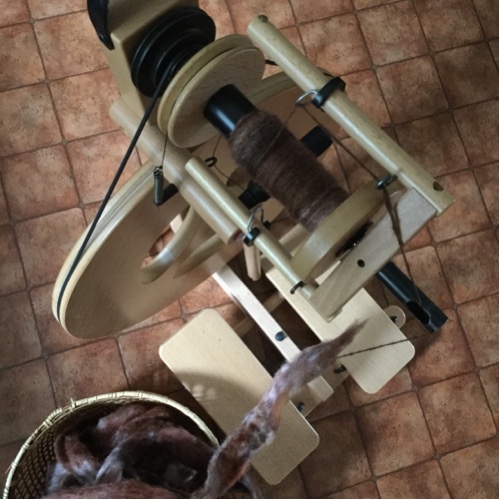 That bobbin is currently full and the second one looks just about the same as this at the moment. I'd be spinning right now except that I hurt my thumb joint a little yesterday by overdoing it so I'm trying to be good and only spun for a short while today. I'm hoping when I've filled the second bobbin I can ply them together on the larger S90 bobbin and have the whole thing end up as one skein. The total weight of the fibre is around 140g and half of that nearly filled the Victoria's smaller bobbin. So that's a lot to expect the S90 to hold at once. We'll see if it will all squeeze on! I already have a possible shawl pattern picked out for this yarn.

What else? The brown sweater is coming along (more mud!) but I haven't knitted on either the socks or the nearly-forgotten shawl project for awhile. The sweater gets knitted on after dinner while watching TV and as I said, the spinning has been obsessing me. The socks will be good for travelling knitting when the sweater gets too large to be portable. And the shawl needs more concentration than I want to give it at the moment. Not to worrry. I rarely abandon projects entirely.

Which reminds me of something I was going to talk about - have you ever had a Myers Briggs test to determine your basic personality type? Some people think it just puts people into boxes but I've found it quite helpful in understanding why I am the way I am and perhaps deal with some of my less-than-helpful traits. So anyway it turns out that I'm an ISTJ -A, which means Introverted, Sensing, Thinking, Judging. If you read the literature on this type it actually sounds seriously boring and bureaucratic. However, I am definitely an introvert, love facts, objective logic and clear organization so that much is definitely true. I tend to focus on the details, the here and now, and am very realistic and pragmatic. What I am not is conservative, traditional or particularly quiet and serious. I don't have any problem showing emotions but others sometimes take me wrong because I'm not good at taking their emotions into consideration when I'm trying to be logical. Or as my late mom used to put it: I'm not very diplomatic. I'm working on that.

I'm very good at following step-by-step instructions (or writing them!) but I'm not good at being spontaneous and fanciful. My imagination can get squashed by my factual/logical side so I'm no good at group-think sessions or free association games. I like to have time to think about my answers and to be able to edit, add and clarify. That's why I prefer to type than handwrite and read aloud rather than talk off the cuff.

I prefer to work on my own since I'm not really a team player. I also don't like to make decisions for other people so I'm not good at management. I just want to know what's expected and then be left alone to do it. I guess that's one reason why I never had a "real job" in the 9-5 sense. I apparently was a pretty good craft teacher, at least for most of my students, but the stress of dealing with so many different people/venues/crafts ended up burning me out. I've been asked several times to run some formal classes again but I'm perfectly happy to say no. Sometimes you have to know when to fold 'em, right?

One trait that really resonated with me is that I have to see a practical side to something or I just won't be motivated to work on it. I don't want theory; I want the facts. (Not the "alternative facts" either!) I hold to the truth - no matter how difficult that might be to hear. Lies make me crazy! However I am trying to learn that not every situation needs all of the truth all of the time from me. Sometimes it's good to keep my trap shut. Well, I do try.

They say that ISTJ personalities are less common in women. Possibly that has something to do with why I can feel misunderstood by other women sometimes. My intuitive side is not as strong as my sensing side so sometimes I have to have it right in front of my face to get it rather than just knowing. Women also aren't often as concerned with "the whole truth and nothing but the truth" because it makes them uncomfortable. Ooh, lookit me getting all analytical!

Well, it was an interesting exercise for me anyhow. YMMV as they say. I've got to go make dinner now. Did it stop snowing yet? Don't tell me they're forecasting more tonight! Arghhh...

snow time is good spinning time! You have had a lot more than we have, wish it would just give up!

I guess you spin what you love - and you love black & brown. Doesn't matter what I spin, there's always something bright like magenta or lime green or purple in it!! hahaha And from one 'bottom liner' with a 'Five Year Plan' to another, I see why I prefer to go to the same coffee shop & eat the same chicken wrap!! And why I love to wade into disasters & organize everything but hate to hang around to deal with the day to day details!! I, too, seem to be an ISTJ although I sit on the fence a little between the I & the E.

I'm voting for spinning time, Jean! And Sharon, it's perfectly lovely if you like the brights. We all have our personal happy palettes. And I do love lime green and purple and magenta too in the right places. I know not everybody shares my love for black, brown, grey and other earthy tones. Oh and thanks for sharing your Briggs-Myers thoughts. Nobody is perfectly one thing or another. We're all a combo effort!