Hello-hello! Yup, I'm still here. Turned out that that one day of sprinkles we had was just an abberation and it's been sunny ever since. In fact, it's getting even hotter. That means several things for us. For starters, we are having to water our garden constantly. That gets old pretty quickly! Today we woke up to lemon-coloured skies and a high haze from the interior forest fires. We're still on tenterhooks as to how we are getting up to Prince Rupert by the end of the month to catch our ferry to Haida Gwaii. They keep opening and closing critical highways and one of the provincial parks we wanted to camp on the way is also closed. I'd really like to avoid going the long way around. It's a very VERY long way! BC is a big province.

It's also not very comfortable in my studio even with the fan on so I've been doing things on the shady deck instead. Thom fixed my old propane camp stove so I can use it for mordanting and dyeing fabrics: 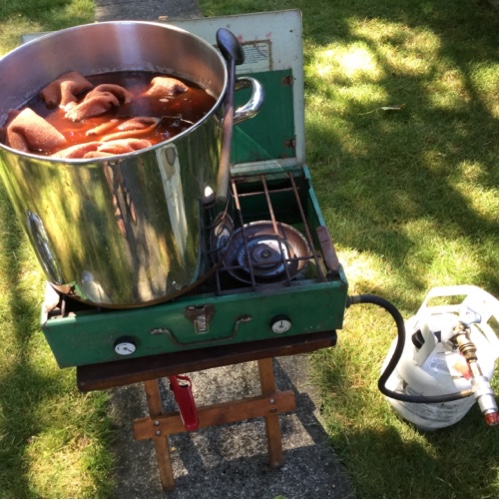 This pot is a mix of the last of my cutch and madder from deepest stash, found when I cleaned up the dye cupboard. Still had plenty of colour in it! I also used up some really red sandalwood that had been "marinating" for a number of years and some old bags of home-grown weld: 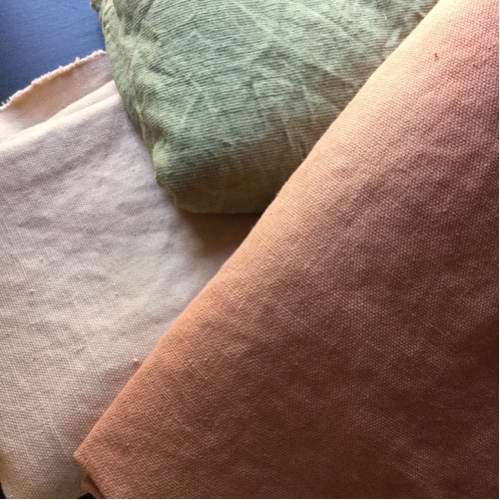 I'm quite pleased with the colours even though the sandalwood was fairly pale on the linen canvas. It had already been used once though so that was to be expected. I really love the olive green from weld with iron modifier on the lighter weight linen. And the madder/cutch gave pretty good colour on the larger piece of canvas. They all magically go together even though I wasn't planning on making a complete outfit.

I also mordanted the wool knit fabrics I got back in March and put the heavy interlock in the madder/cutch exhaust bath but you'll have to wait until I've finished it to show you. Remind me I need to get some more cutch now. I love that stuff. Dyeing larger pieces of fabric is rather an exercise! Wet yardage is heavy and it's really hard to squeeze out the excess liquid. I much prefer dyeing yarn.

So what else is new? Last Friday I got to show the studios and garden off to a small group of fashionable women, all of whom I first met on the Internet before I met them in real life. We had a blast and I didn't take any photos at all! Bad blogger. Melanie (Bag and a Beret), Sue (A Colourful Canvas) and Barbara (blogless but vancouverbarbara on Instagram) are all delightful and we had a lovely afternoon on the deck drinking Thom's wine and nibbling on fruit and cheese. See? Sometimes you can make real friends out of electronic acquaintances! They aren't just pixels on my screen or comments on this here blog.

Now I'm struggling to get through the picot bind-off on my orange Linen Dreams Shawl. It's 3 steps forward and 2 steps back! Over about a gazillion stitches. OK, slight exageration. But I've worked on it for several hours already and am not even halfway done. I'd like to get it blocked sometime this century. Though it's kind of too hot to wear it right now anyway. Anything is too hot.

So since I need to continue with the knitting, I'll leave you with a photo of my Hibiscus syriacus "Marina" (aka rose of Sharon or althea) that's just come out in the last few days: 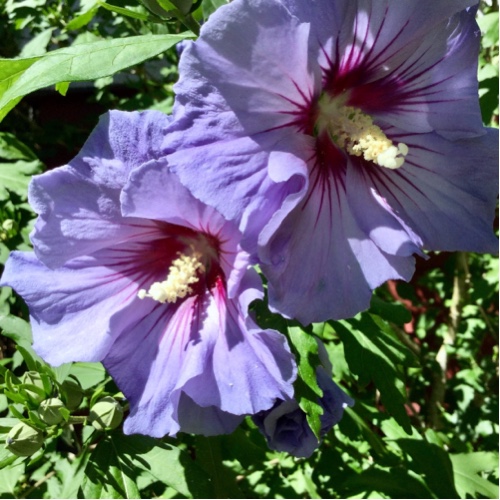 I love that blue-violet colour! Apparently you can dye with the flowers (as well as eat them!) but I have yet to try it. I just started to save some of the spent blooms in the fridge for experimental purposes. The information I have says that it's a bit of a chameleon and you never quite know what colour will appear. Sounds like a challenge now, doesn't it?

Hello. Hello. Having been to your lovely home and garden, it's though there are additional layers to your posts. I can see the dye garden and the studio and the bountiful veggie garden in my mind's eye.

Such a gorgeous flower!

Ditto Sue. Visiting with you and Thom and your gardens and studios was one of the highlights of my summer. Really, someone should do a documentary about you two – so much creativity going on in your house. So much fun.
Vancouver Barbara

You are so welcome, my dears! It was fun and I forget sometimes that our lifestyle is so different from so many other people's. It's just us and we do what we do. You do realize, Barbara, that the best way to shut me up is to hold a microphone in front of me!