Well that was a busy time since my last post! On Wednesday I was lucky to get a ride with friends over to West Vancouver to watch the Slow Clothes: The Art of Fashion show. It was a showcase presented by Wearable Arts Vancouver and featured one-of-a-kind and limited production garments, accessories and jewelry. There was quite a range of styles and the models were much more diverse than you would usually find and also including 3 handsome young men. (They of course got a rave reception from the crowd of mainly older women!) Among the fabulous outfits I saw several simpler pieces that I would wear myself. If they fit me! But I just browsed the tables and booths set up after the show and of course didn't buy anything. Instead these days I seem to be totally focussed on materials to make my own.

To wit: more mad dyeing has ensued! On Thursday a couple of my friends from our Spectrum Study Group came over and we played with my walnut dye. If I can't eat the darn things (thank you, evil squirrels) at least I can dye with them, no? I had collected the walnuts over the past several weeks in a bucket of water left outside on the deck to bubble and ferment. I simmered them for an hour and then left them overnight to stew and the next morning simmered them again. We used the pot without taking out the nuts and managed to get some pretty strong colours: 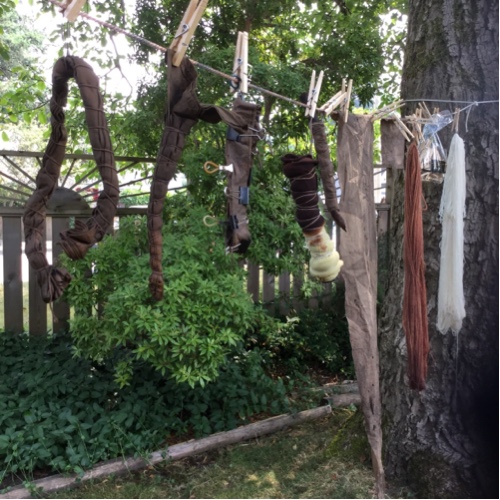 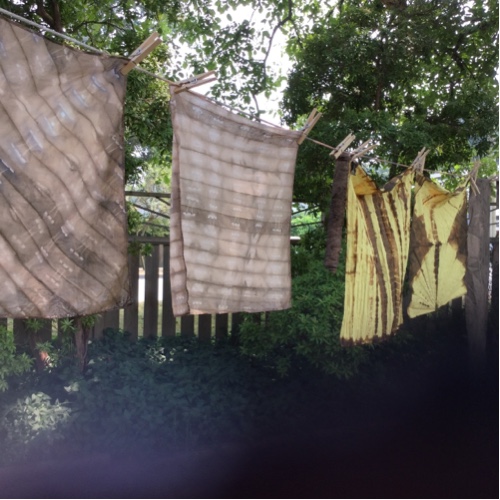 My contact-dyed (aka eco-dye) linen napkin is still waiting to be unveiled but this is what it looked like with the plant parts on it: 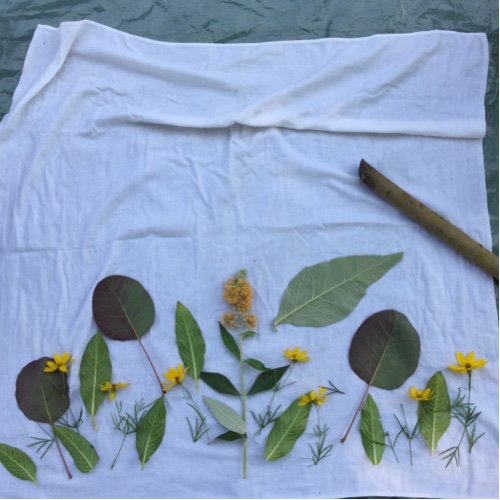 There's an orange buddleia (butterfly bush), some bronze cotinus (smoke bush), sprigs of threadleaf coreopsis (tickseed) and a few leaves of my pathetic Japanese indigo. It was folded, wrapped on the stick and tied with string and then plopped into the walnut pot for a simmer. More on this one in a future post.

The red-brown wool up there in the first photo was a definite surprise. It was originally a pale oatmeal colour and was mordanted in alum/cream of tartar and I only dipped it into the walnut pot for a bare moment! I thought I might get a tan but this colour is so much better. It will go together with more of that Cloudborn Highland yarn in a future yoke sweater project.

As if that wasn't enough dyeing, I also chopped up some of the stems and flowers of my dyers coreopsis: 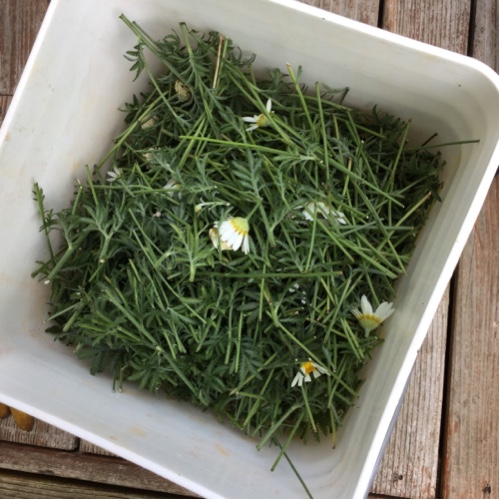 I've had this plant for several years and never yet tested its colour potential. I've already harvested and dried a few small bags of just the flower heads but the aphid situation stopped me for several weeks. Now the clump is putting out new flower heads and the aphids seem to be much reduced so I thought I would see what I could get from the whole plant tops: 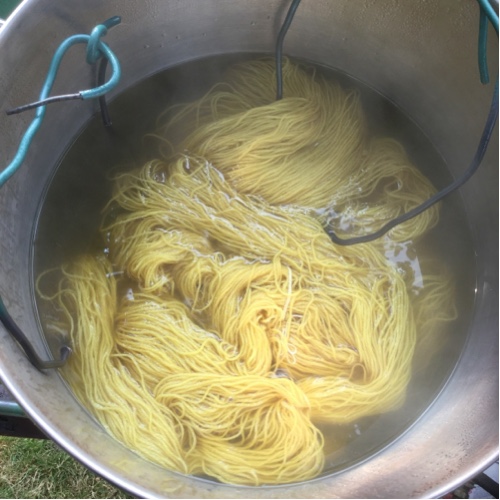 They were subjected to my usual technique of simmering for an hour and left overnight then the plant matter removed and brought back up to a simmer the next day. Yellow! A lovely soft butter yellow, not quite as intense as weld gives. I had previously decided to finish my skeins off with an iron modifier so just one wee little teaspoonful of iron sulphate gave me: 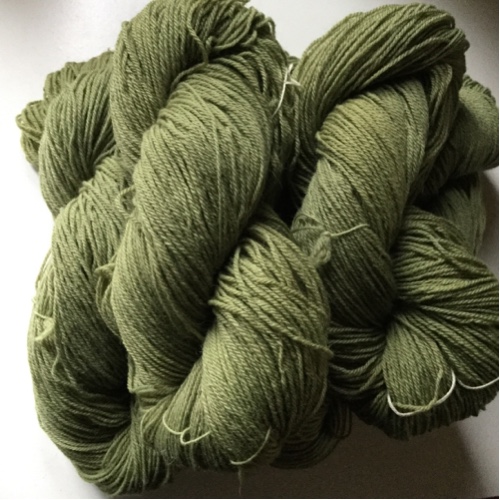 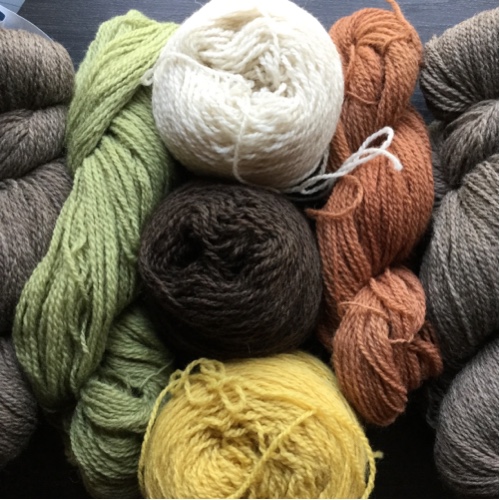 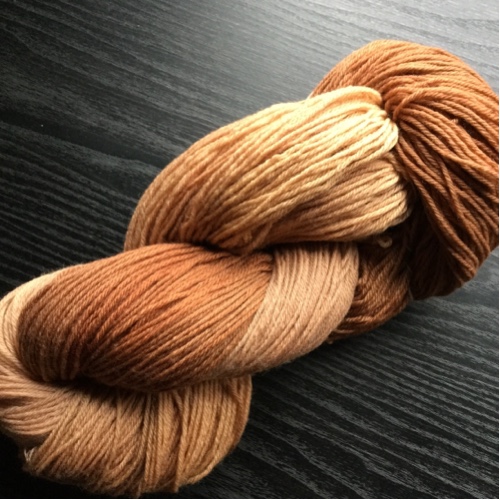 Then this Cloudborn Merino Sock Twist was dyed in 2 different leftover dye pots before I disposed of them in the compost. The lighter peachy-tan section was dipped in the (starting to mould) cutch/madder pot from a couple of weeks ago. And the darker section was dipped in the walnut pot. There was sadly still a fair amount of colour left in both pots but I wasn't able to keep them until I had more things to dye. So out they went. 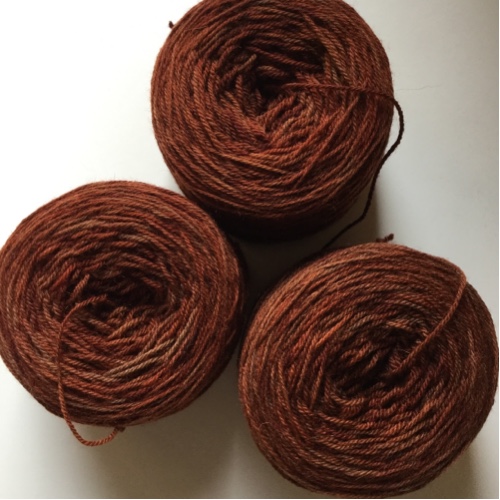 Guess what? All of them worked just fine and the dyebath cleared perfectly. Sheesh. Seems that I can't really justify throwing them out if they're going to work properly. There's too much to easily use up though and I'm reluctant to give them away just in case some of them actually are non-functional. A dilemma.

Okey-doke. I'm done with dyeing now for awhile. It was great to have the campstove outdoors with the clothesline up and all. The ability to drip and splash without worrying about the consequences was fun! Also easy to dump the nastier stuff in the driveway and the plant material in the compost. It was nice to keep the heat and smells out of the house too. (Though I admit to liking the interesting scents of most of the natural dyes, except rhubarb and lac - neither of which I used this time.) I now have lots of projects both sewing and knitting ready to keep me occupied this fall and probably on into the winter.

Next project - cleaning and packing for the September Trek. Only 2 weeks to go before we leave. The weather has finally cooled down a little and it actually rained some last night. Yay, no watering today! The garden is winding down with only the last of the beans, tiny cucumbers and zucchini plus the now-finally-ripening tomatoes left. At least we can bring some produce with us because we aren't crossing the border this time. Otherwise everything has to be used or preserved or my kids will come by and abscond with whatever is left! Assuming the squirrels, rats and raccoons don't get it first.

Louisa, your talent never ceases to amaze me!

Thanks, Sharon! I'm not sure whether that variegated skein will be socks or something else! But the red-brown yarns will definitely be a sweater. I'm obsessed currently with sweaters. Must be because it's been so chilly lately, right? Not.

Wow. So many beautiful colours from plants. It's fascinating for me, knowing pretty much nothing about dying, how those flower tops can create such a gorgeous colour. And nuts to colour. Fascinating. I am in awe of your knowledge and skills.