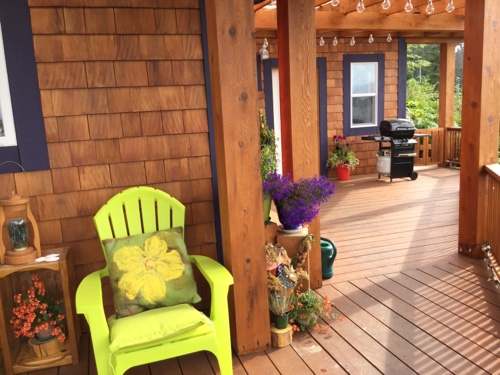 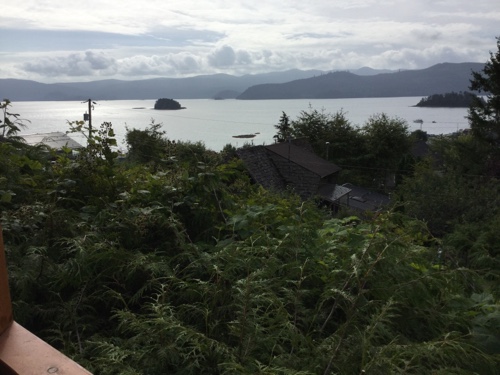 I'm here on my sister and brother-in-law's lovely deck looking at this view. Nice huh? The sun even came out for a few minutes!

We had a fairly uneventful trip to Prince Rupert. We only saw one forest fire off in the distance near Kamloops and never smelled any smoke - except for the campfires that they started allowing after they removed the campfire ban. Bleh. The provincial park campgrounds are pretty empty though so it wasn't nearly as bad as if they were full. I guess many people have been staying home instead of venturing into the BC interior, afraid of running into forest fires and closed roads. The weather was quite hot and sunny until we got to Prince Rupert. The drive along the Skeena River west from Terrace was as spectacular as I remember, especially with the wisps of fog decorating the mountains. So pretty.

However - you guessed it - the minute we got to our campsite at Prudhomme Lake Provincial Park it started to absolutely pour rain! I totally wished I could send it south to my parched garden. We ended up spending the rest of the day holed up in the van and the next day headed for the ferry wharf...

The Northern Adventurer finally left 1-3/4 hours late. We were already on Island Time! To be fair they booted it and made it into Skidegate at the scheduled time so we could have dinner at my sister's. We even saw whales off the ferry before we got out into Hecate Strait.

The weather has been rather changeable ever since. We went for a walk yesterday with my sister and her 3 little dogs down by the shore between islands: 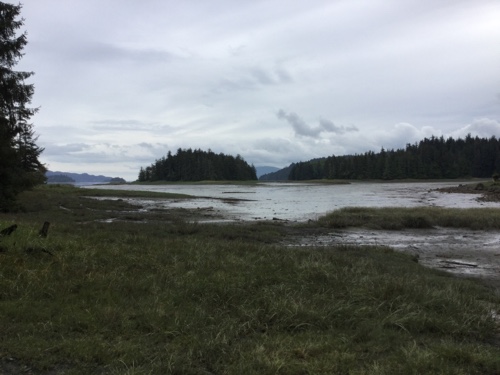 This is near the mouth of the Trundl River and on the other side, past my sister and her dogs over there by the trees, was.. 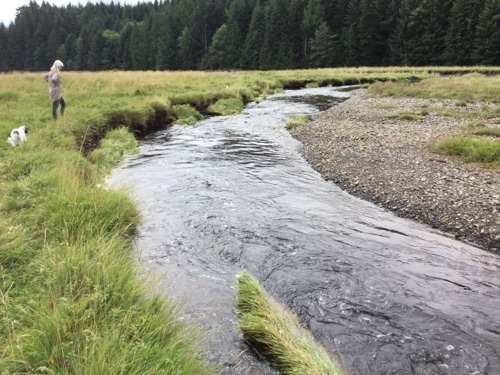 ...a bear! We nonchalantly turned about and headed back the way we came and it didn't pay us any mind. Whew!

So we're hanging about here until perhaps Monday when we'll head up north to Masset and the Agate Beach campground. So relaxing.

It looks lovely!!! It's been many moons - gawd, maybe 45 years since I traveled to Rupert & I still remember how much it rained!! Your sister's porch looks terrific - just think about how relaxing it would be to spend a weekend out there spinning . . .

Yes, a very beautiful porch indeed. I remember horizontal rain in Prince Rupert! Possibly the dogs helped to keep the bear away, do you think?

Sharon, I spent awhile knitting instead since I didn't have any spinning with me. Though if I was desperate I could have borrowed my sister's wheel! Yeah, she's crafty too.

Barbara, the wee dogs would be just a bear snack! And they never even noticed it was there.

Bears are one thing that scare me about the Great Outdoors. I'm glad the bear wasn't interested.
But what a beautiful place, a place to unwind. And to knit. The ocean must look, smell, and sound so soothing.

Please when you have had enuff rain could you send a small amount my way. Kleena Kleene and Colwell Cr fires still burning to the north west, could use several days of rain, would even welcome snow.

Oh, Lynne, I'd send you all the rain that's been dumping on us today if I could! So sorry for the ghastly fire situation. Safe wishes and hope there's respite soon.