Well, here we are! Were you able to see at least some of the eclipse yesterday? We got 85% of it here in Vancouver. Though it got a bit darker and the temperature dropped significantly, the sun was still shining enough not to look too wonky. (No, of course I didn't look with my bare eyeballs.) I think the best part for us was the shadows cast by the trees: 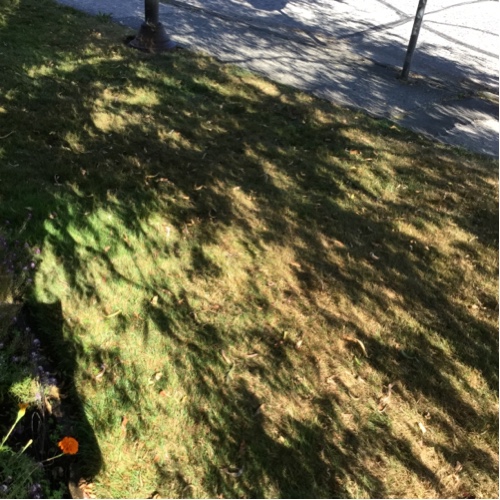 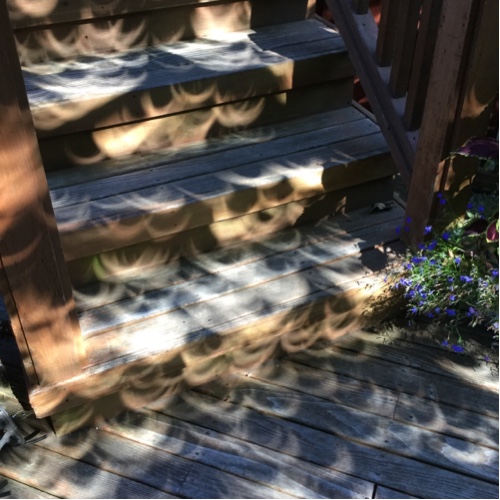 Nobody mentioned this was going to happen! I think the spaces between the leaves acted like pinhole cameras and allowed you to see more of the occlusion. It was very magical!

So, what else? I've been packing up my knitting to take with us on the September Trek. One can never have too much knitting along. I usually err on the side of enough for about 3 times as long as I'll be away. You know - just in case I'm faster at finishing things than I think I am. There's also the issue of what can I knit while we're driving and what more complex project needs to be saved for peacefully sitting under a tree. I've already finished one pair of my Rose City Rollers shortie socks. The colours seem to go with everything: 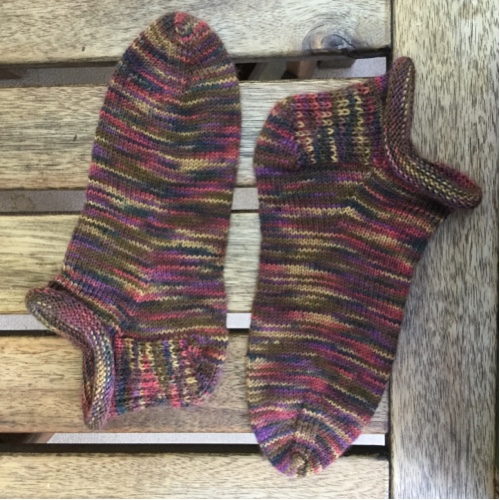 I had exactly enough of this Regia sock yarn left to make another pair. I'm just at the gussets now.

And I couldn't help starting my self-designed Combers Tunic/Dress: 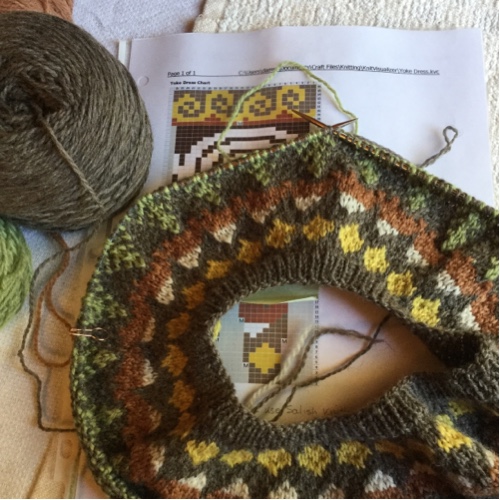 I showed you all the colours I'm using in the last post, 3 of them come that way from Craftsy and 3 of them are the Oatmeal Heather (near-white) that I dyed recently. I had a great time inventing the chart that I'm using! The comber wave is from Alice Starmore and the rest I made up using the Knit Visualizer program on my desktop computer. There's a ring of suns, snow-capped mountains, fir trees, giant comber waves, and finally some smaller curls of spray. I wasn't sure it was going to work but I think it's looking okay. So far at least.

I'm also using the Salish Knitting technique that I learned from Sylvia Olsen when I was at the ANWG conference in Victoria. It looks very "pebbly" as she calls it on the back side: 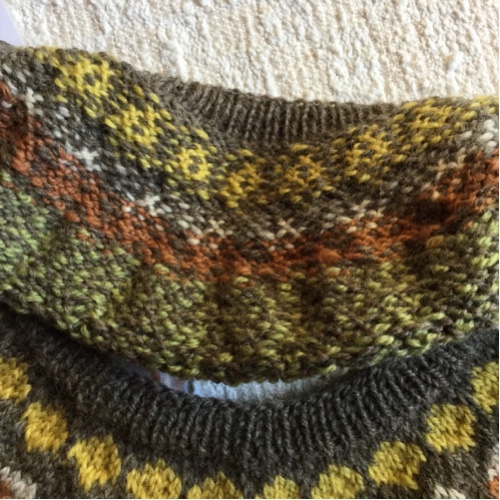 Look, ma! No long floats! My tension is a little lumpy but it should smooth out somewhat after blocking. Unlike my instructor, I'm knitting it 2-handed: Continental with the left and English with the right. It took me awhile to regain my English knitting skills since I haven't knit that way for years but now I'm remembering and getting faster and with better tension. Sylvia uses only right-handed moves and drops the yarns between colours. There are many ways to achieve the same end, yes? I wonder if it can be done flat, intertwining on the purl side? I'll have to experiment. I don't like to steek because I hate cutting the yarn though that may be the only way to do the pockets that I have in mind for this project. We shall see.

There's 3 more projects in my knitting bag too but they are holding off until I finish the Comber. I'm hoping to be past the yoke and on to the stockinette body before we leave but you never know. I have a lot of stuff to do between now and Sunday.

To that end, I decided that I needed to get a bit more organised and especially to have one place to record what's coming up next and where everything is that I need, both physically and digitally. Also a place to put random ideas and thoughts that come up because, darn it, I usually forget those little details too quickly these days. So I've gone analog! (Quit laughing, you.) On advice from a couple of converts, I'm trying the Bullet Journal system. What I like best is that you don't need anything more complicated than a notebook and pen: 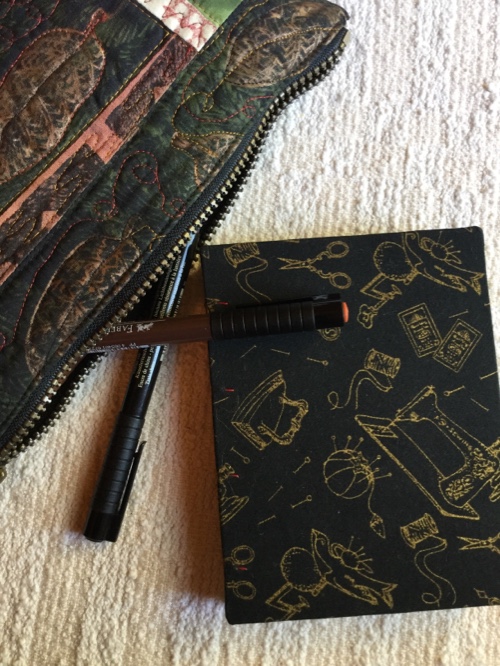 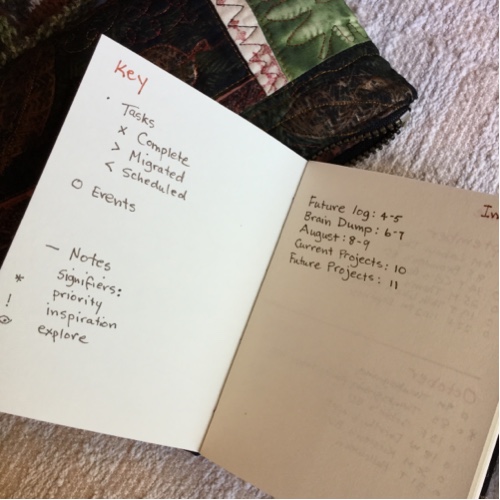 My notebook was made by my friend Heather (True Stitches) and the pencil case is one I made ages ago. The Bullet Journal is really simple, adaptable and yet powerful. I've only just started but so far it's working pretty well for me, but I think it will take awhile to figure out what I need and what sticks. The beauty of it is that it doesn't matter. If I find something isn't right, I just turn the page and try something else. I'm not a student or a business person so I'm definitely not going to need to fill in as much as some people. My life is actually pretty simple! When I run out of space in my little notebook, I'll make a new one. You didn't think I was going to buy one, did you? I can incorporate bookmarks and a closure. Maybe a pen holder. Meanwhile we'll see if I can keep at it long enough to fill up this one!

So, what else do I have to tell you? Oh yeah. I finally broke down and opened my plant-printed linen napkin that I made at the last Spectrum meeting: 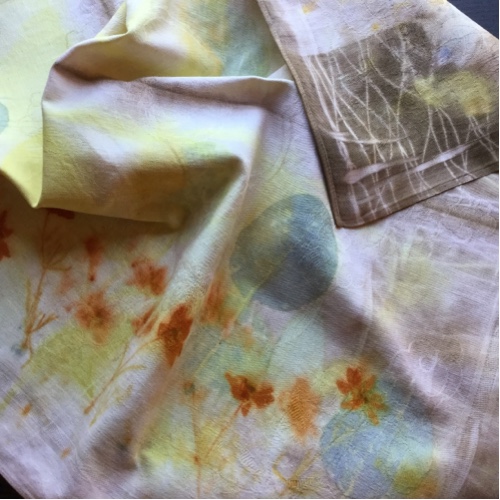 The perennial coreopsis prints very nicely and I love the unexpected blue that I got from the smoke bush! The main yellows are butterfly bush and the Japanese indigo leaves barely printed anything at all. Poor things. This napkin will be cut up and incorporated into a sewing project later this fall. Oh, and I bought another variety of perennial coreopsis to plant in the dye garden: 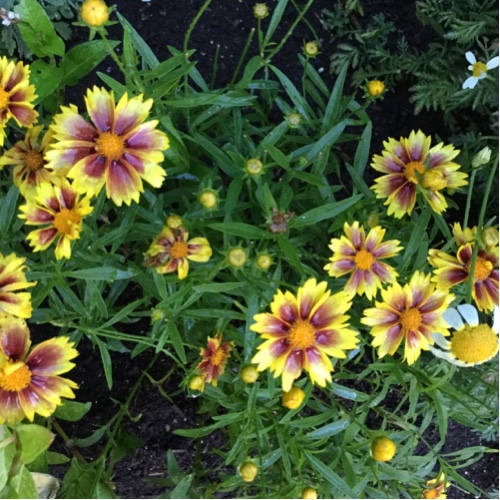 It's name is "Enchanted Eve" and it's so pretty! Also it was on sale at the garden store. Heh. Hope it survives the winter better than my grandiflora did. We shall find out, won't we? I'm controlling my urge to pick the flowers to dry for dye yet before the baby gets established.

Hope that's everything I've been saving up! I don't know if I'll have a chance to blog again before we leave but I'll try to at least get out a quickie. BTW the roads are open now but we're still going the long way around to Prince Rupert through Valemount to avoid some of the horrible smoke. So much of BC is just ashes. Ugh. Worst forestfire year ever.

So much here, Louisa! I love those shadows from the eclipse. Like magic from the sky. Odd, breathtaking. The knitting projects for the road, it's great that you have choice depending on your mood, I suppose? I didn't even know there were two knitting styles. Hahaha. You would faint at my notebooks, such a chaotic world. Heh. I wonder how I make sense of any "important" lists in there. You pencil case I love. And the napkin, so beautiful. If I don't see you again before your trip, I hope you have a wonderful time.

Thanks, Mel and Jean! And yup, there are even *more* than the 2 different main knitting styles. There's also Eastern Crossed and Combination and Portuguese too. In fact, almost every knitter does it just a little differently. I never did learn how to knit exactly like my mum did and she was still knitting at 90, in spite of worsening vascular dementia. It's all about the final product, right - no matter how one gets there!