I’ve been feeling lately like I have far too many things going at once. It seems I can’t juggle a lot of balls at the same time! Not that I was ever much good at it, I’m getting less able to deal as time goes on. Not necessarily a bad thing but one I have to keep in mind lest I become overwhelmed. The biggest issue right now are the knitting projects. Just for starters I have two big sweaters going at the same time, both in fine yarns with lots of stitches. It seems like I’m not making any headway on either of them! Time to resort to the progress markers to keep up my spirits. I feel like I really shouldn’t cast on anything else until they are both finished. Which brings me to the project I shouldn’t have started but did anyway. And actually finished too!

This is my Ripple As You Go scarf. Pattern by Amanda Mannas and available free on Ravelry. 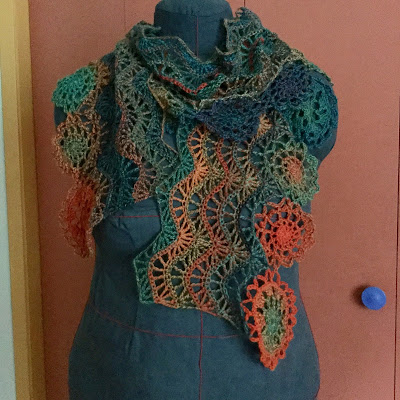 What can I say? I had the perfect yarn from deep stash, although this didn’t turn out as wide as I had hoped because I only had one ball. The finished scarf is in between the scarf and shawl width. Aren’t the colours festive for October? I did end up adding one narrow row of a leftover non-matching yarn because I was running out. I needed enough to work the last joining row that linked the row of medallions to the ripple section. It was a nail-biter but I just made it with about a yard to spare. Whew. 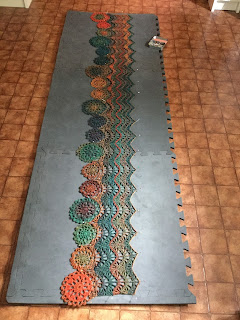 I blocked it pretty severely but superwash wool and nylon sock yarn does tend to relax again rather quickly after taking out the pins and wearing the scarf. Doesn’t matter. I’ve been wearing it pretty much nonstop ever since.

Obviously I’m embracing the Slow Fashion movement rather heartily! At least now that this piece is done I feel better. It was kind of a guilty pleasure! Like eating potato chips. Moving right along with all those other waiting projects. Getting out the progress markers for them now...

The scarf is a beauty! The colour palette with those subtle shifts from blues to oranges is so pretty Louisa. I can see how this project called to you and you answered.

I was thinking about that feeling of overwhelm. You know I have it too. I sometimes wonder if it's, at least in part, because we have the luxury of doing all these wonderful things. I'm thinking back to those days of full time work and other commitments. We had to really focus on the task at hand then.

Definitely having less time does make you more efficient! I’m trying to avoid the old lady cliche of “at my age...” but I can’t help being aware of time as a very finite thing. And unfortunately I can’t take the stash with me when I croak! And there’s still so much I want to make but it all takes time. A conundrum for sure.

If making scarves like this is like eating potato chips, I'd have a closet bursting with them! I LOVE this. It says, AUTUMN! in the best possible way. When I saw you Friday another woman said it looks just like the landscape in Scotland. Brilliant choice of colours. "Deep stash," heh, sounds subversive.
Let your balls drop.

Well, well, well! A little bit of color. I love it when you bust loose with some color. Fall lace should work well with all your browns, greys & blacks!! Keep up the good work.