Hello! Time has been flying as it seems to do when one is having a good time. I admit I was wrong when I said that fall was going to be dull this year. It just took awhile to get going! We’re a couple of weeks behind where we usually are but I’m sure not complaining. Today was especially gorgeous so I managed to get out in the garden and do some more clean-up. I got the deck pots cleared and tucked away in the greenhouse. And I didn’t forget my potted rosemary this year. I lost a favourite one last winter because I didn’t put it in the greenhouse where I can cover it with an insulating cloche if it gets particularly cold. I also have a more cold-hardy Arp rosemary but I don’t like the flavour as much as the more delicate one. Figures.

I also started cleaning up the dye garden. We plan to expand it somewhat next spring (because I desperately want more madder in particular) but for now we’ll just clear out the annuals and maybe plant a little fall rye in the empty spaces. Just to have something besides bare dirt. Otherwise the dog walkers let their pets use my garden for a toilet. Bleh.

Meanwhile we had a quick visit from my sister and her hub. Too short but they had to get back to Haida Gwaii and their guest house which they can’t leave for long. Hope they got back safely because right now there’s mudslides and washed out roads and power outages and all kinds of bad news coming out of  their part of the province. Yikes.

As if I haven’t given myself enough projects I’ve been inventorying my pattern and fabric stash. I need to keep things in front of my eyes or I forget I have them! The iPad app I’ve been useing is Sortly and it’s quite useful. You could inventory your entire household’s possessions if you wanted! (Useful for insurance purposes.) I haven’t gone quite that far. Yet. I used to have my patterns catalogued in my old iTouch but wouldn’t you know it, that database app isn’t transferable. I think it still exists but it’s completely different and too complicated to use. I’ve used Sortly for a year and although they have gone to a subscription model now (with backup on the cloud) I still have the Premium version which they kindly still support. Yay. I don’t need a whole lot of bells and whistles. Just photos, tags and a space for notes. Good enough. All my spinning fibres, yarns, sewing patterns and some of my craft equipment is all in there. I just need to sort the fabrics now. It wouldn’t be an issue if I only had normal little stashes like most people. Ahem.

I did try out another app called Cora. It’s specifically for fabrics and has more information that you can input. It’s very good for what it does. However, I decided that I wanted something more versatile because I have more than one type of thing to inventory. I especially wanted my pattern information so that if I see some yummy fabric in the store, I can figure out how much I need easily. Sortly keeps its data on my iPad so I don’t need Internet access to use it. 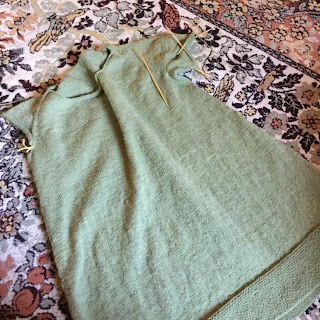 I changed the hem ribbing to garter stitch because I like the weight and drape that gives. In which case I’ll likely be doing the same with the sleeves which I’m currently working on. The yarn situation is getting a tad dicey since I’m on the last ball of yarn with most of two sleeves to go. Then there’s still the neckline too, though I have a small extra ball for that. The jury is still out on what I’ll do with the sleeve length and cuff if I’m running short. So far this sweater fits perfectly anyway. It gets knit on while I’m watching TV in the evening after dinner.

And then there’s the Combers Tunic/Dress: 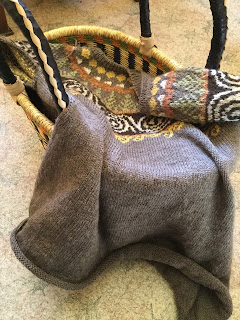 This one is going even slower than the Green Seamus. I’m only knitting on it occasionally when I’m reading. It’s just miles of stockinette with a few side increases thrown in every once in awhile. Perfect for not paying attention. It fits pretty nicely too so far but will be even better after blocking. Hopefully these both will be done before it actually gets cold around here. They’ll be warm and toasty!

Lastly I was working on a shirt for Thom when I got sidetracked by the inventory bug which took over my entire sewing area. The Thread Theory Fairfield Button-Up seems like it’s going to be a good shirt. Proper collar stand! Tower plackets! Burrito yoke instructions! All I have to do is cut the interfacing and sew the darn thing. When I can find my sewing machine again.

I am loving the color work on the Combers. Is that your design/pattern or is there a commercial one?

The big wave was borrowed from Alice Starmore but the rest of the yoke pattern is totally out of my own head. As soon as I finish the sweater I’ll post a better photo and a lot more details!

Great minds think alike. I too, was doing garden clean up yesterday. Wasn't it just gorgeous!!!!

I love the colour of your sweater Louisa. It's so soft and ethereal.

Louisa, I'm curious about a comment you dropped in there, "I’m only knitting on it occasionally when I’m reading" - do you mean listening to audiobooks or do you actually read a print book while you knit??

Yes, I can read a book while I knit simple plain things like socks and acres of stockinette like this sweater! Though I mostly read digital books on my iPad - rarely read paper books. If I’m reading a paperback I need a book holder that keeps the pages open while my hands are busy. I don’t listen to audio books because my attention tends to wander badly and I miss half the story. Just a quirk I guess! Of course if the knitting needs more attention (counting, lots of increases and decreases, colourwork) I need to watch what I’m doing and then reading is totally out.