Hello again! I suddenly realised that I’d forgotten to blog a couple of things. Everyone says that nobody blogs anymore and everything blogable ends up on Instagram instead. News flash: not everyone is on every social media site! I don’t want to be that person who neglects her blog but sometimes it’s fun just to pop it into Instagram. But then (the horror!) I feel like I’m done with it. However, it ain’t necessarily so.

So here is my Boro Tea Cosy, which I finished up nearly a week ago now: 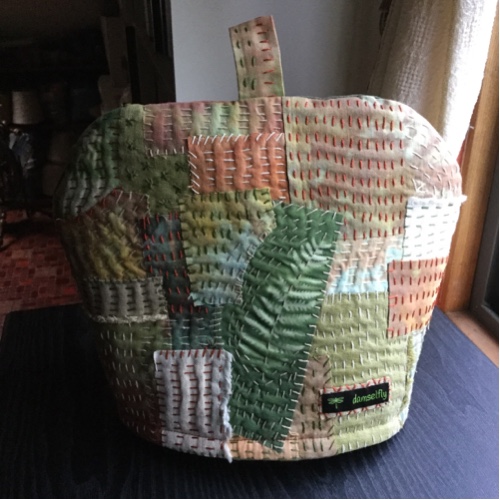 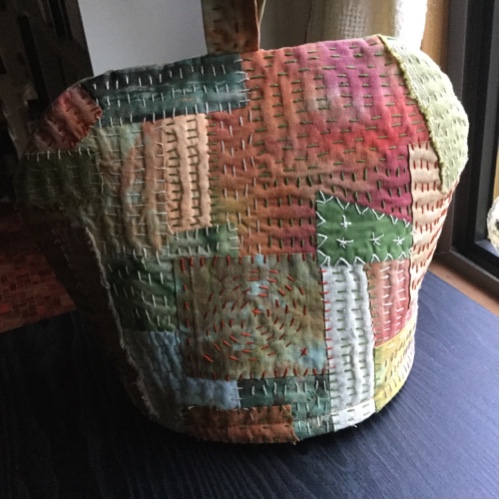 And a peek at the lining that I dyed in walnut leaves: 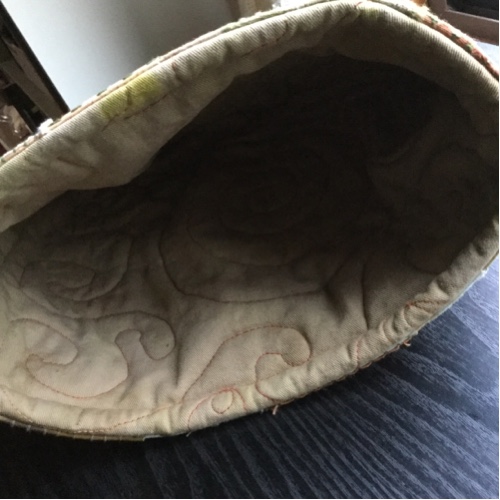 And then we bid a fond farewell to the old rughooked cosy that had served so well for so long: 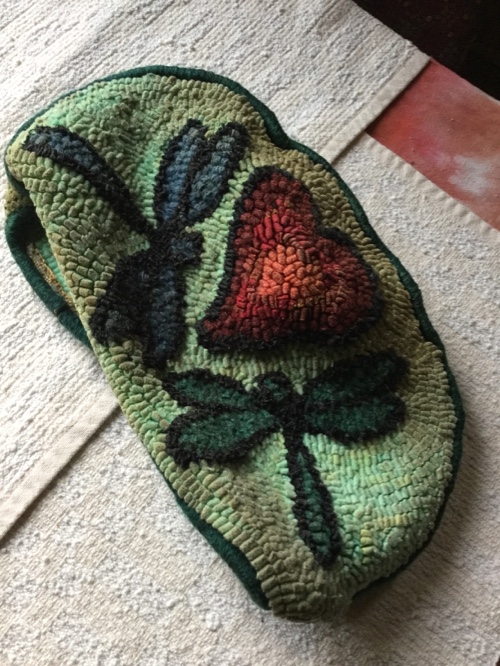 Poor thing was way past its best-before date! The new cosy has a tab at the top to grab it by so hopefully that will keep stains confined to that area. I probably should have used wool batting in it instead of poly because it’s not quite as insulative as the old one. But it does the trick of keeping my teapot warm for a couple of hours so what more could one ask.

I quite enjoy the process of stitching, even though my technique is coarse and clumsy. But I decided that as long as I was having a good time and not stressing over perfection it’s quite good enough. I’m happy to use bits and bobs from around the studio too: scraps of mostly hand-dyed fabrics too small for anything else but too nice to throw away and threads from the weaving stash. There’s lots more where those came from! Maybe some cushion tops for the couch next?

Another thing I forgot to blog was this: 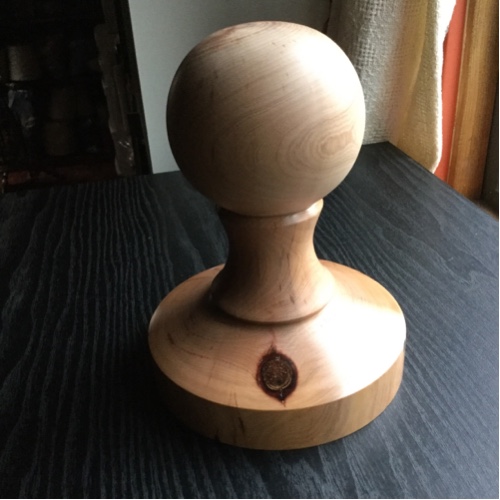 Thom made it for my friend Sue of A Colourful Canvas. It was a very special request and since he so rarely makes anything on demand, I was surprised when he said yes. Oh. What the heck is it you ask? As described by the Fairy Bra Mother, Beverly Johnson, it’s a bra pressing knob. A very fancy one indeed! (Mine isn’t nearly as nice.) It was turned from a whole piece of arbutus wood (Arbutus menziesii aka madrone or madrona for all you US folks). Doesn’t it look like a pawn in a very large chess game? When we presented it to Sue, I wisecracked that it was a Chest Piece and after everyone guffawed - that’s what we call it. I do love me a good pun.

How is it used? I draped my last bra over it to show you: 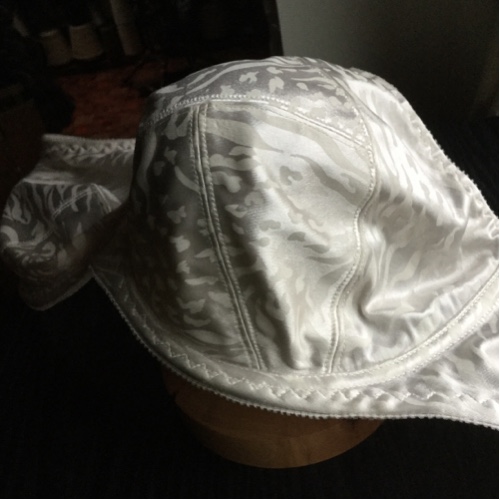 Sort of. Anyway, you use it to press the cup seams when sewing bras. It makes it much easier to avoid flattening the cups because the ball sits inside and provides a firm surface to press on. Thom finished the lower part of the Chest Piece but didn’t put any oil or wax on the ball so it can handle the heat of the iron without anything transferring to delicate fabrics. When not in use for its intended purpose, it can double as sculptural art, right Sue?

Now I’m wondering if there’s anything else that I’ve totally forgotten to blog about? Yeesh. Do you folks have any idea how many posts I’ve written only in my head?

Are you sure your hubby didn't giggle the whole time he worked on this wooden masterpiece??? I would've. Although it's perfectly useful & wonderful, my mind says 'Boob Ball' & won't go anywhere else. Good on you, Mr Damselfly, for creating such a great craft item.

Actually the joke around here is all about Thom's balls...er, spheres! Bet you can't unthink that one now either, can you? Heh.