A Long And Winding Yarn

Yes, I’m still here! (And I still have shingles - about which we will not speak. Bleh.) Anyway, I’ve been slowly plugging away on a couple of projects. All involving wool, which is absolutely my favourite fibre hands-down. Particularly for the colder months of the year but I still wear wool socks for walking even in the hottest weather. No substitute for the real thing. Sheep’s wool is insulating, wicking, self-regulating, biodegradeable, sustainable and renewable. What’s not to love? Unless of course you’re truly allergic in which case I feel very sorry for you.

So what exactly have I been up to? First of all, with Thom’s help I finally got the Stashbuster Blanket warp on the loom. It took forever because all that washing, rinsing, dyeing, and rinsing some more made the strands stick to each other just enough so that they didn’t slide past each other easily. It was a matter of wind a few inches, strum, shuffle, tug, pull, finger-comb and wind a few more inches for a full 11 yards. Yikes! There were a few broken ends and a few swear words but we took it slowly and got it wound on. For some reason, one of the sections was about 6” short at the end and I have no idea how that happened. Perhaps I wound it a bit tighter on the warping board than I did the succeeding sections? It’s actually amazing how just a wee difference in tension can add up over a long length. Luckily I have plenty of warp so it wasn’t really a problem. I just hacked the other ends off to match.

My warp is wound from 2 and 3-ply yarns but my weft yarns are finer single ply. Remember those kinky skeins that came out of the dyepot? They all needed winding into smooth cakes so I can then wind bobbins. Whew! 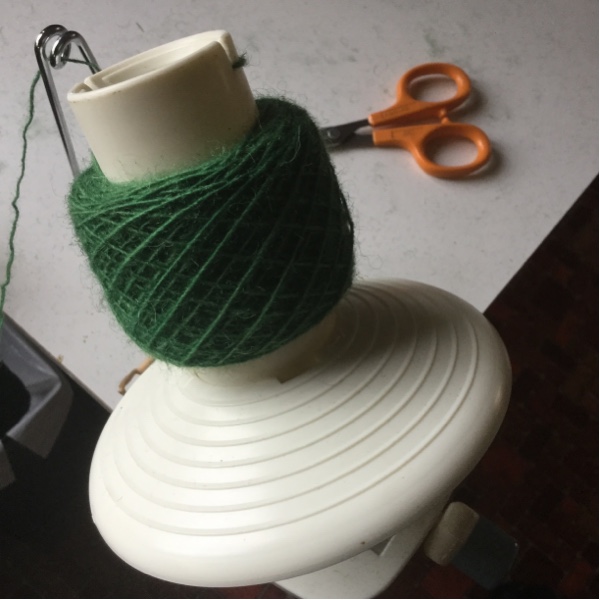 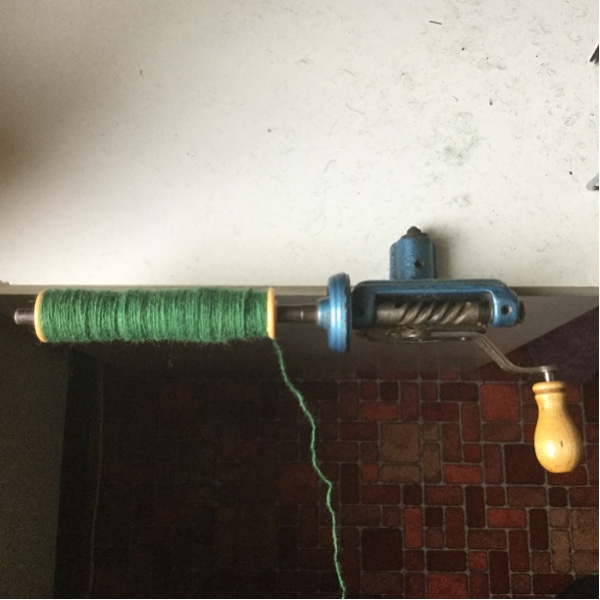 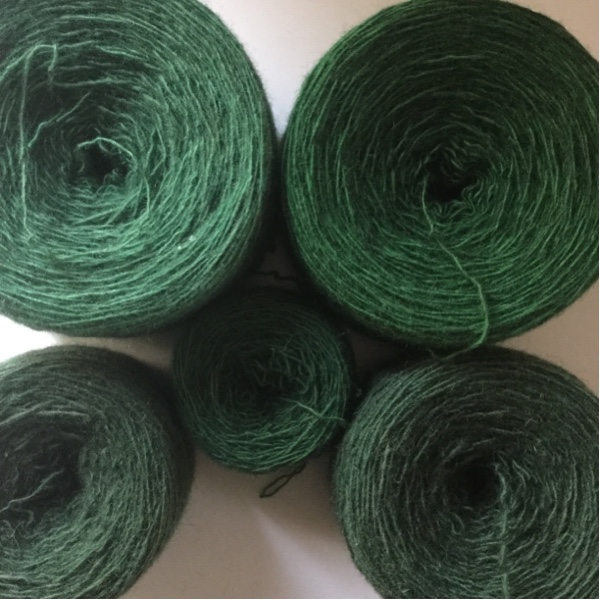 I have the skeins that I dyed green with the warp plus some extra in red, purple and orange. I’m adding the contrast colours randomly in narrow stripes and it really does help to punch up the greens: 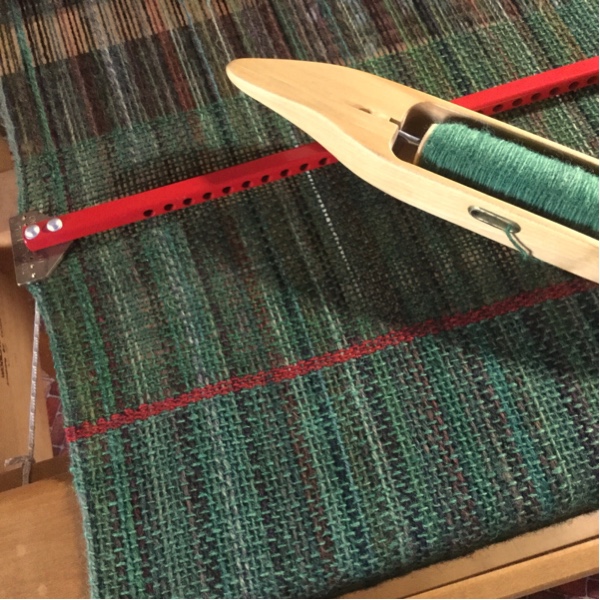 Look! Cloth! It seems a little open and airy on the loom but it will close up and be lovely and light and warm after wet-finishing. I’ve only got about a foot woven so far. Again it’s really slow going. I seem to be having trouble regaining the ability to toss the shuttle across this wide warp. Especially from the right for some reason. I’ve had the shuttle fall through the warp and hit the floor (aka “submarining”) numerous times. I’ve tried tightening the warp and scootching my bum closer to the bad side which helped somewhat. But I still have to watch for skips. More practice necessary obviously. It doesn’t help that the warp threads are various thicknesses and twists and wool types which means that they are all somewhat differently tensioned. Nothing I can do about that really but hope I can overcome my rusty skills issue or this is going to be one tedious weaving project!

The other project I’ve resurrected is the grey Coopworth yarn spinning for a sweater for Thom. Nothing bad happened with this but other things just demanded higher priority so it got back-burnered for awhile. Instead of knitting (which I still haven’t been doing at all for weeks now - yikes!) I’m spinning in front of the TV in the evenings. Unfortunately I can’t spin without watching what I’m doing (unlike knitting) but I can glance up every now and then to keep up with the action. It seems to be working anyhow and I’m currently on the third bobbin-full: 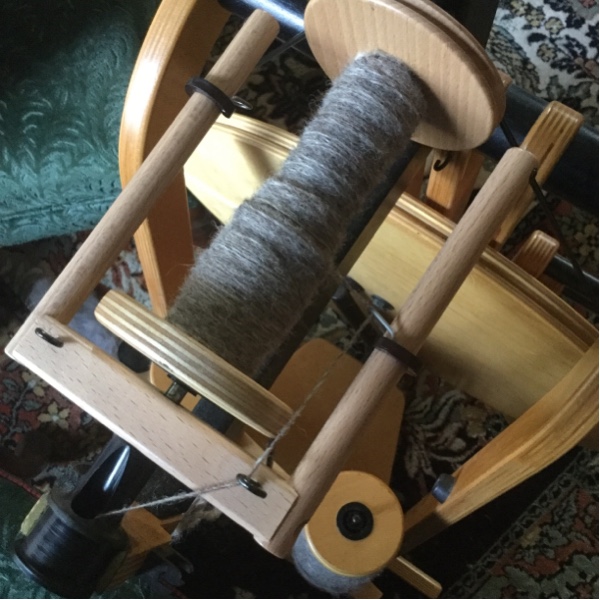 There will soon be enough to make some 3-ply yarn. Yay. It’ll be fun to use my Mega-Kate that Thom made to hold the bobbins while I ply. More on this when I get to it.

Along with no knitting, there has been no sewing action either. There has been a little walking when the weather cooperates but mostly I’ve been reading between short bouts of the above-mentioned weaving and spinning. I’m already 6 books up on my Goodreads challenge for 2018! My energy isn’t up to its usual level and I’m still feeling periodically uncomfortable thanks to that health issue I’m not speaking about. Nearly 4 weeks now. It’s not going away quickly and quietly. Grrr...

Back to winding the rest of the cakes and more bobbins. Or maybe I’ll just go read a book.

Sorry to hear you're still having problems with the 'Plague'. It's been so long I can't exactly remember how long the Ex still had sore spots - I know one on his temple bothered him for ages but overall, he was pretty good after a week!! He responded well to the medication.
You sure are busy with weaving & spinning though. I just don't have the patience for warping or for weaving, for that matter although I did like Tapestry & even bought a small loom but I really like your fabric so far.

Your blanket project looks so beautiful, I love the varied colors of greens... Here is hoping that you continue to mend well from The Ailment, and that with gradual practice the weaving will become easier.

Thanks so much for your good wishes, Sharon & Alison! Your encouragement means a lot to me. There are textbook cases of shingles and then there’s reality which of course varies. A lot. Since I’m not speaking about it (heh) let’s just say that the rash was the least of it and I now know more about the nerves on the left side of my body than I wish to. Itch. Poke. Twitch.

Back in the Olden Days I used to weave quite a lot. I still have all the knowledge in my head it’s just the old body that has forgotten. And there’s some physical deterioration also to blame I’m sure. (Apart from the Plague/Ailment/Roofing Tiles, I am unfortunately no longer a spring chicken.) I will stick with it though and expect that improvement will happen. If I want the results badly enough I am stubborn enough to finish anyway! 10 yards or so should give me plenty of time to regain some skills.