Day 13 was our second day in the Valley of Fire. The weather was near freezing in the night but sunny and a little warmer in the daytime. We drove up the road past the Visitors Center to White Domes at the end: 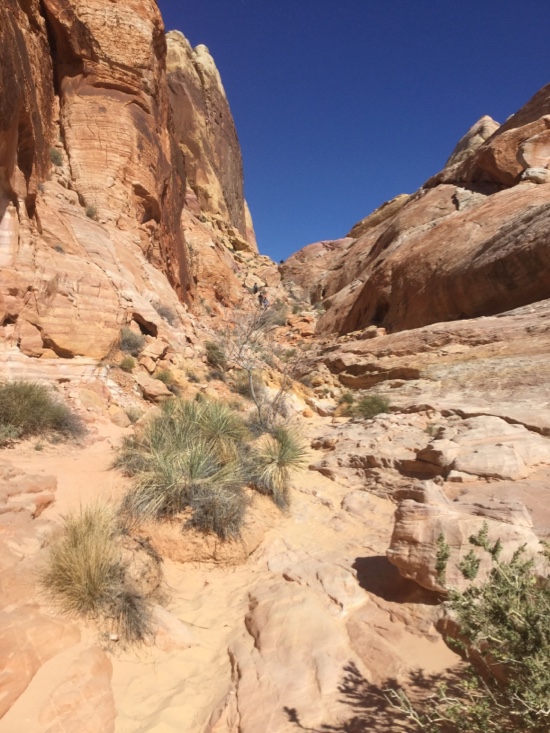 Yes, we came down that rather rugged trail! My favourite part of the park is in this area where the trail goes through a narrow curvy slot canyon: 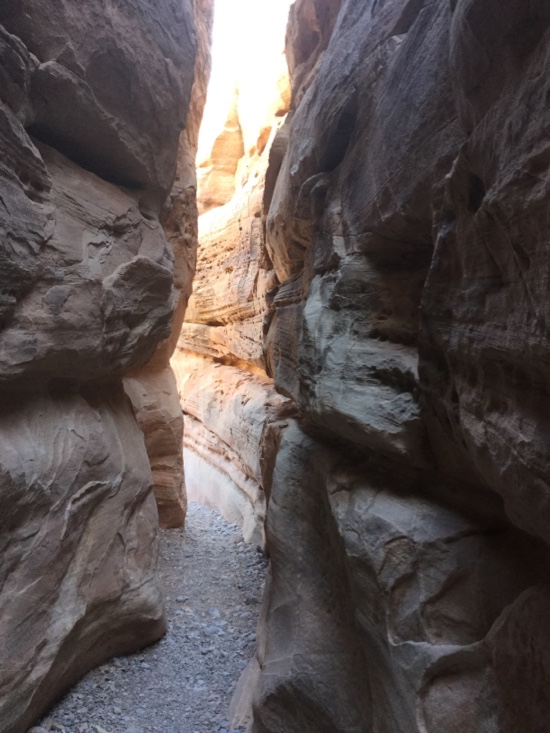 After White domes we drove to the next trail at the Fire Wave: 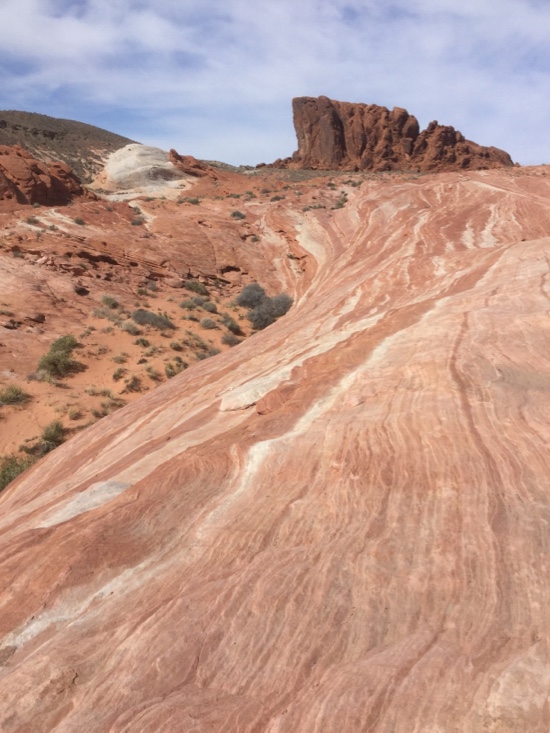 Layers of sandstone in different shades of colour worn smooth over the millennia. On the way back we discovered these big barrel cactuses: 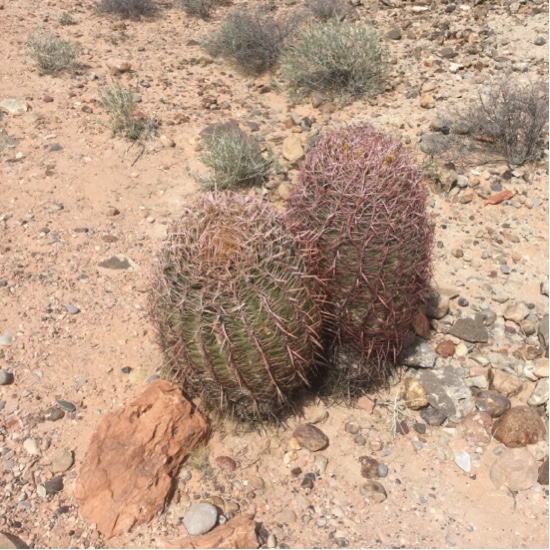 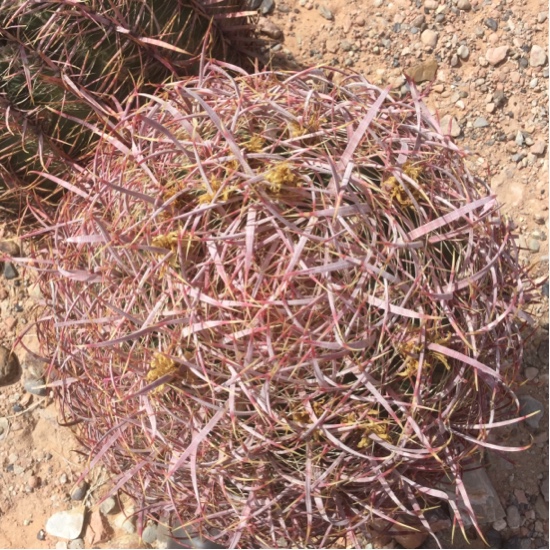 They’re nearly a metre tall and the dried flowers remain from the last time they were able to flower. You pretty much don’t want to touch any of the plants out here if you can help it. Ouch. Afterwards we went down to the Visitors Center where we found out the names of some of the unfamiliar plants and animals here. We were particularly interested in the sparrow-sized birds we saw for the first time: shiny black with a crest and white spots under the wings when they fly. They don’t seem to have a common name besides “phainopepla” so I started calling them “Pepi” for short. To me they look like tiny Steller’s jays but without the indigo blue and with much more pleasant voices. The females and younglings are apparently a lighter shade of gray than the males’ but we didn’t see any.

Our third day at Valley of Fire (Day 14) was a little warmer still. The sun was hot but the wind was cold so it depended on where you were and what you were doing as to whether you were too hot or too cold. We drove back up the White Domes road and took the trail to Mouse’s Tank. Mouse was a Native man wanted for murder who hid out in the red rocks, using this natural pocket of fresh water to stay alive: 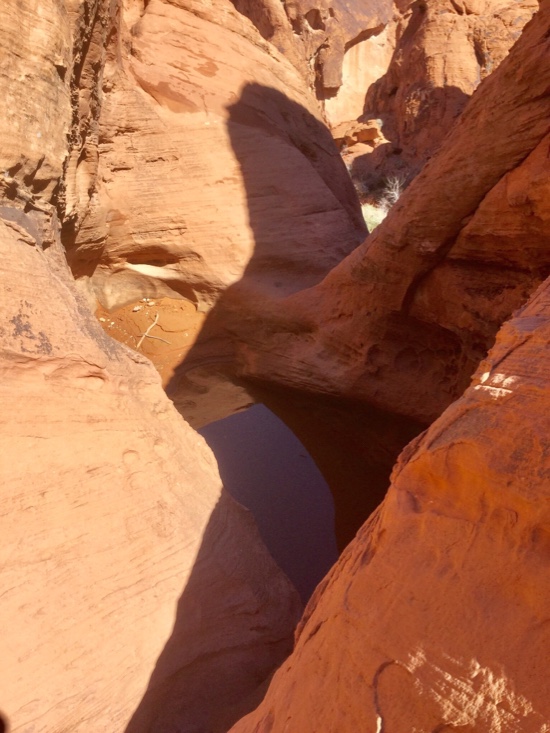 You’d have to be desperate to drink it though! Also on this trail are many petroglyphs: 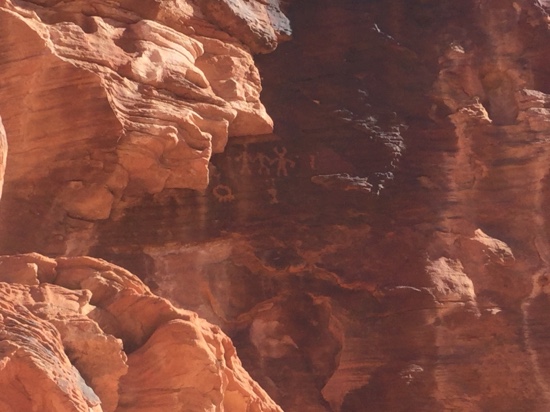 This one of a shaman and two people is particularly nice because it’s protected up high under a bit of an overhang. We also walked the Rainbow Vista trail but we didn’t climb up the very high rock for the 360-degree view. We saw lots of pretty green lizards and antelope ground squirrels though. The latter look a little like chipmunks but they carry their tails over their back using the white side to reflect the sun like a parasol.

On Day 15 (and our fourth at Valley of Fire) we were finally running out of ice so we drove into the nearest town of Overton to get some along with a few groceries. There were lots of noisy grackles in the parking lot, fighting over any crumbs dropped by the shoppers. These birds remind me of our small coastal crows but they have long tails.

Back in the park we stopped at Elephant Rock and hiked the loop trail. The view was pretty from the top: 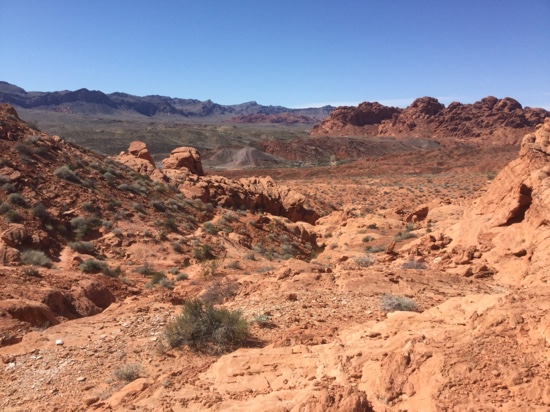 You can just see the road and one of the parking lots down below. The Elephant needs a bit of imagination: 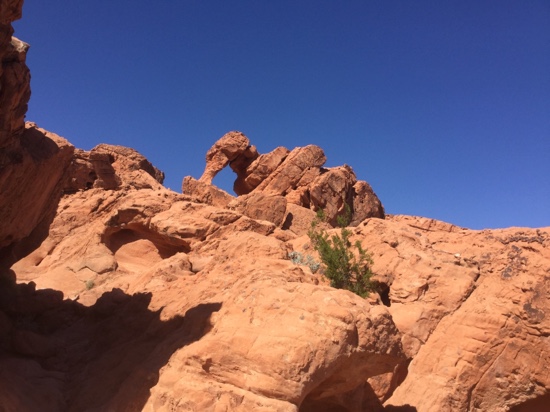 But you know people will see images in virtually anything, right? We also stopped at the cabins that were built of native stone in the 1930’s when this park was first set aside. 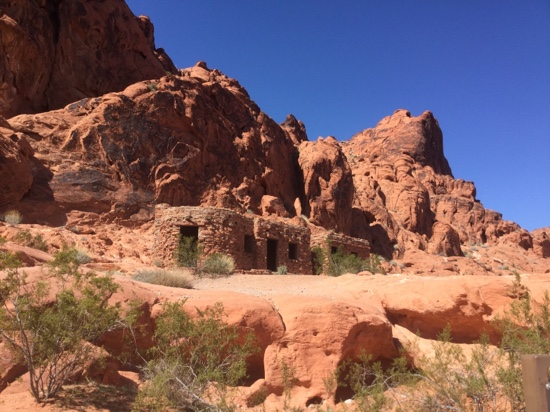 They apparently were for hikers to use and there’s 3 rooms. I like the round one on the near end best: 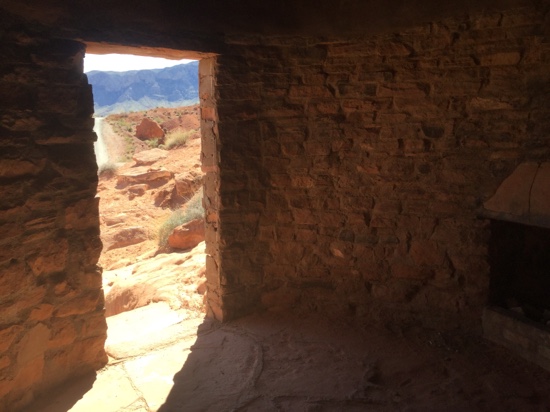 Needs a door and a window but the fireplace is still there. The park even keeps the roof in reasonable repair. Nothing mentions it but there are also more petroglyphs in the cliffs just above the cabins. Lots more bighorn sheep.

Day 16 was our fifth and last day in Valley of Fire. It clouded over again and the wind is quite chilly. We lazed about all morning reading and then drove up to White Domes again and hiked the trail backwards: 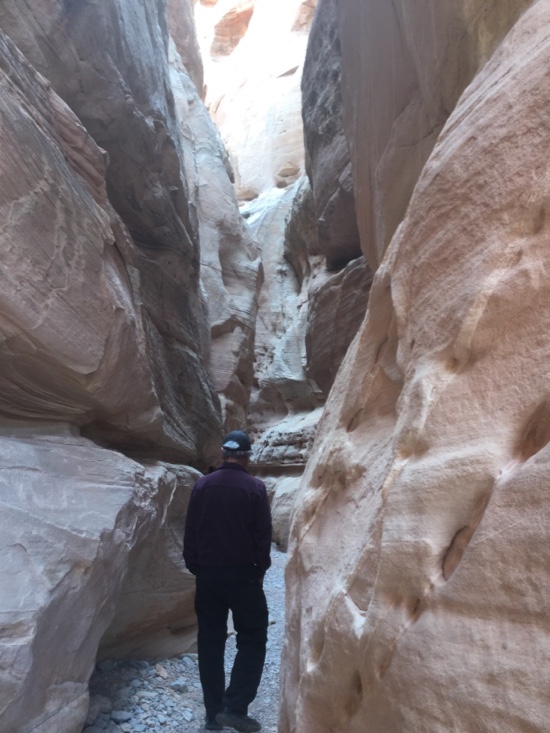 It’s amazing how different things look from the other direction! Also the lack of bright sunlight brought out more of the colours in the rocks. The drive up and back was incredibly beautiful. We’re going to miss this place but it’s finally time to move on.

Oh, I might have forgotten to mention that I finally finished Thom’s handspun Coopworth sweater. At least I didn’t have a photo until now: 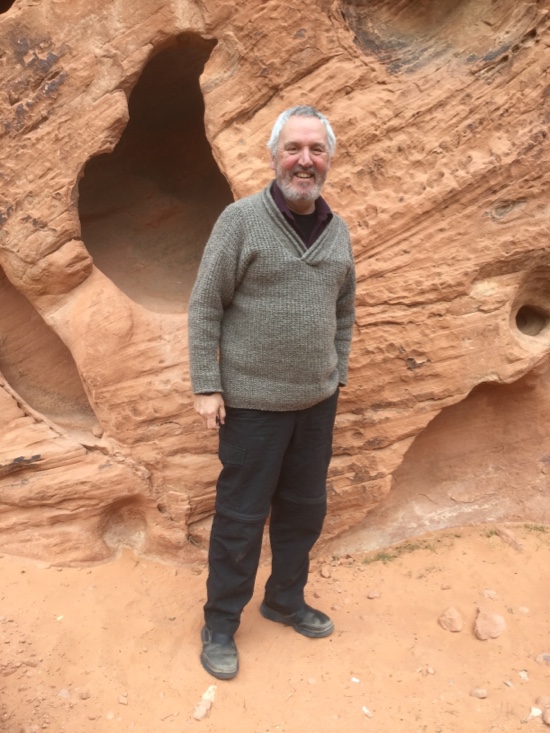 He likes it and barely has taken it off since the last end was darned in. It hasn’t been blocked apart from a bit of steaming I did back home. The neckline sits a little wonky but perhaps a real blocking will help. He doesn’t seem to mind anyhow. The sleeves were both knit twice because they weren’t comfortable the first time. Gotta make it right or it won’t get worn! So. Notice the new beard? I kind of like it but we’ll see if he keeps it when we get back.

Tomorrow it’s back to California and further south for a few days before we start heading back. I’m going to miss our campsite in the holey red rocks though: 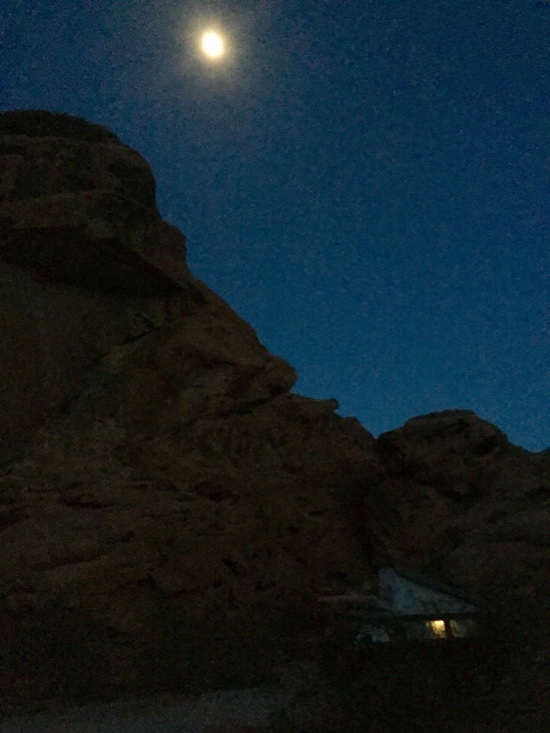