On Day 10 we headed north and east to Death Valley, but first we stopped at Fossil Falls: 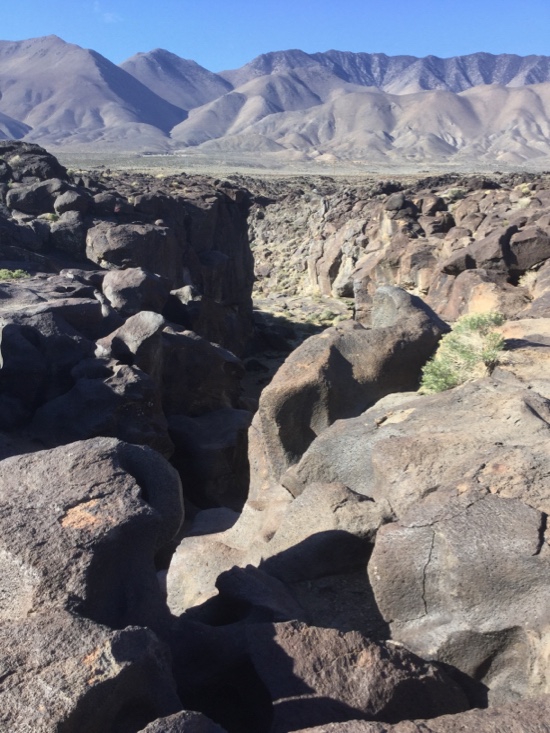 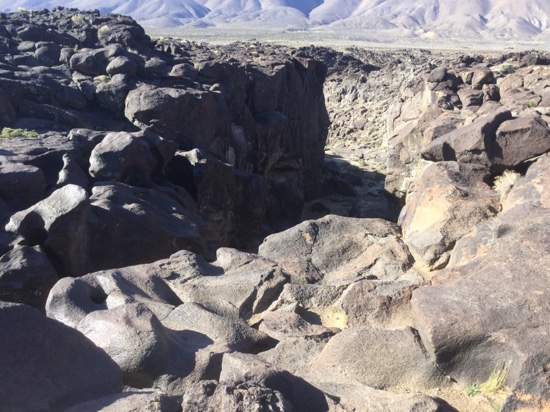 A mile down a gravel road and a short hike to see the volcanic rocks that have been smoothed and worn into fantastic shapes by the river that used to run down here. It drops a hundred feet down in what was a waterfall and then down again in another drop. No water remains and the area is the usual desert dry. Sculptors like Henry Moore could have been endlessly inspired here!

We carried on up and down the curvy mountains and across the basins. This one is the Panamint Basin, smaller than Death Valley, from partway down: 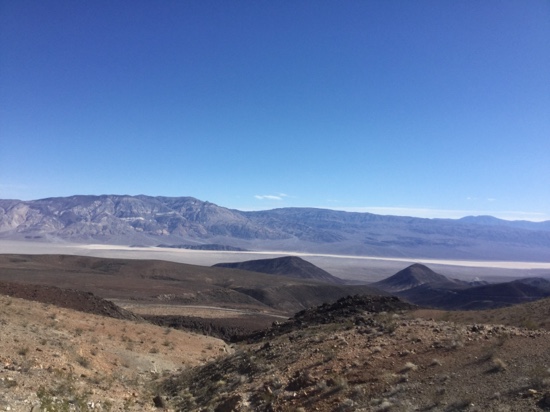 Shot from the moving vehicle window! We went up again on the other side and then down into Death Valley. It was quite busy at Furnace Creek for the middle of the week but we managed to get a tenting campsite for 2 days under the shade of the tamarisk trees. We originally had wanted a third day but decided that we would take what we could get. From the campground we walked the bicycle trail a mile to the remains of the Harmony Borax Works: 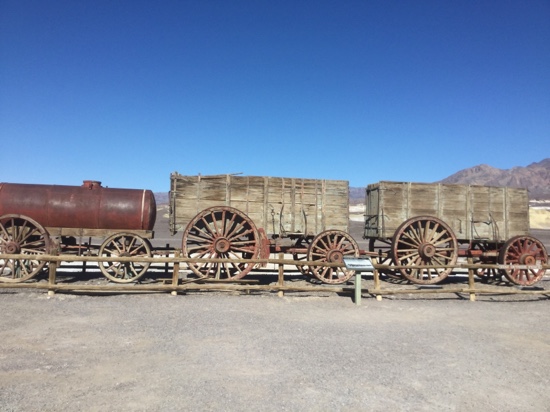 Imagine the old 20-mule-team pulling this full of borax with enough water in the tank in the back to keep everyone alive. Some of the boiling tanks were still visible where they purified the mineral first before transporting it out of the valley. Just like the limekilns in Big Sur, this enterprise only lasted 5 years before cheaper sources were found elsewhere. You can still see the salt deposits everywhere though: sodium chloride, calcite and gypsum as well as borax.

The weather was quite a lot warmer here though still very pleasant at around 20C (68F) during the day. The nights were still quite cold but not nearly as cold as Red Rock Canyon was! On Day 11 we packed up after breakfast and drove down the Badwater Road to the Salt Basin, the lowest spot in North America at 282 feet (85.5 metres) below sea level: 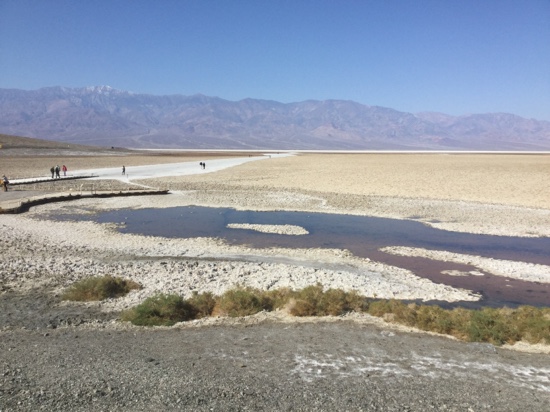 The salt is really rough but people have walked a trail right out into the middle. I found it hilarious that it gets narrower and more bumpy as you go because less people have walked that far. I certainly wouldn’t want to do it in summer! There are some small salty ponds at the edge that are made by water from ancient aquifers seeping out. There are teeny tiny little snails that live in them! Amazing that life can adapt to the most inhospitable environments, isn’t it?

Back along the Badwater we drove up the badly washboarded road to the Natural Bridge trail. It’s a bit steep but not very long climb through a rock canyon carved by water that is mostly not there (unless it rains which happens rarely). 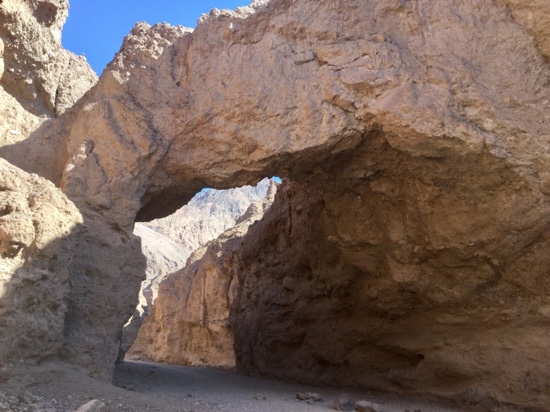 The trail continues underneath and you can see some really interesting dry falls: 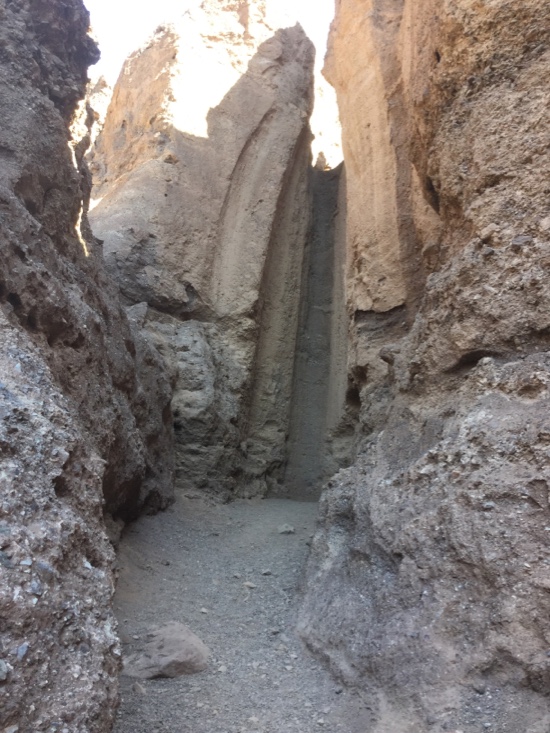 Again carved by water. Back down again we negotiate the gravel road again and then took the turnoff to the Artists Drive, 9 miles of spectacular alluvial fans where different minerals were deposited by the water in different areas creating patches of reds, oranges, yellows, purple and turquoise. At the Artists Palette parking lot you can climb around to see the colours closer: 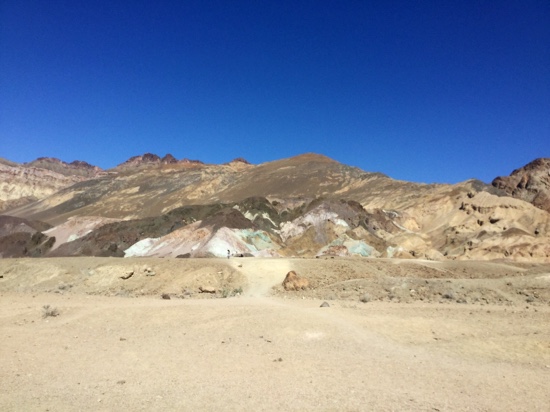 I found it really difficult to photograph what I was seeing with my eyes so you’ll have to take my word for it that it was astonishing.

And here we are on Day 12. We got up very early and drove east and a little north right through Las Vegas to the Valley of Fire State Park, Nevada. This is our 4th state this trip and the farthest east we plan to get. We have 3 or 4 days here in this very cool campsite: 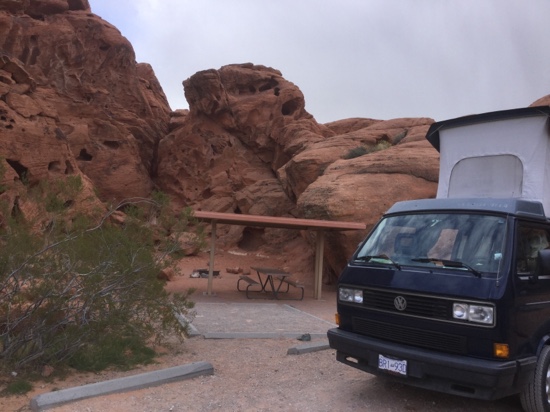 Tucked in the holey red rocks! It’s rather chilly here with some cloud and it also snowed on us for a short while. It’s not usually this cold here this time of year. However, the advantage is we can hike without overheating. The last time we were here it was September and it was very hot, especially in the afternoons. This time we needed our heavy jackets and woolies!

From camp we walked to the Atlatl Rock petroglyphs. I particularly liked the scorpion: 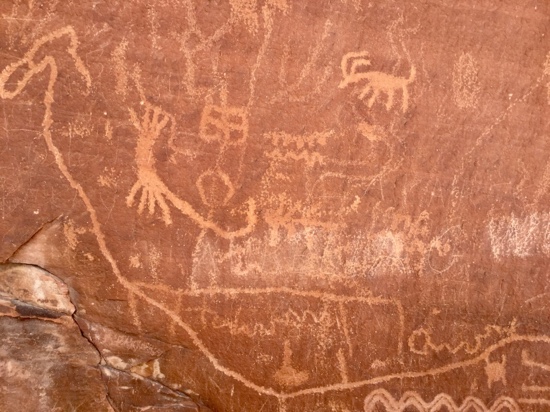 And of course the bighorn sheep. There’s lots of them here: 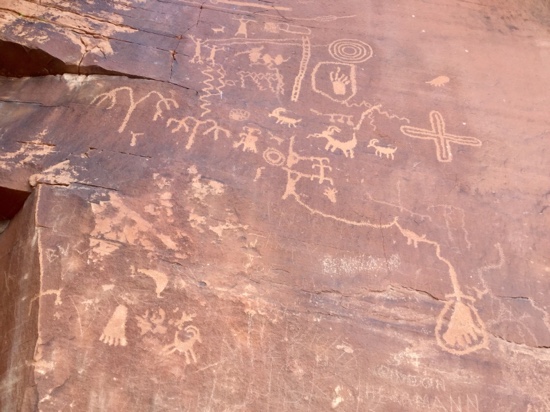 I’m perpetually fascinated by pictographs and petroglyphs. It’s amazing how similar the shapes are from one area to another. They can be from many different eras too layered over each other. Sadly this area has some modern idiots adding their names and initials. It’s just so wrong to deface something that’s been here for thousands of years.

We also saw the Arch Rock that our campground is named after: 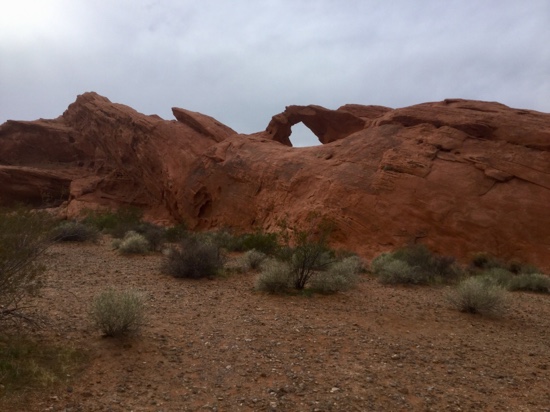 I’ve certainly collected a few photos of these natural shapes too. The red sandstone rocks here are riddled with holes and mini-caves and cracks. I never get tired of looking at them. Also the plants are much more green this time of year. It’s a perfect contrast with the rocks and orange sand: 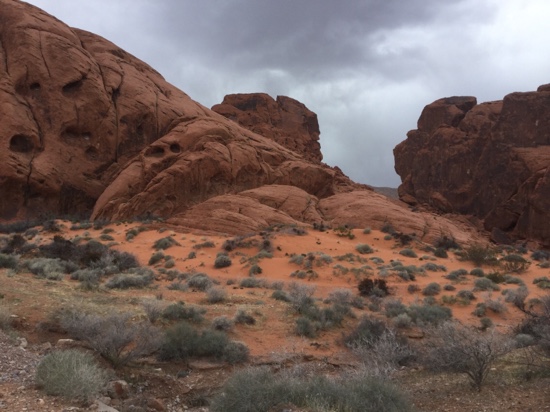