Too Clever By Half

Me again! Yeah, so soon. Sometimes I need to say things before they leave my head forever. You know how it is.

Anyway, I’m finally back in the sewing studio. I started by repairing all the pants/leggings in my previous post. Only took a few minutes, most of which was time spent changing thread colours. Now they are wearable again for awhile. Yay.

Then I did the ironing. Procrastination much? Finally I dug into the cut-out-and-to-be-sewn pile. Unfortunately, sewing is not like knitting. If you don’t like something that’s already cut out, you can’t just start again at the beginning. Unless of course you cut out something smaller or piece it back together! I (mostly) finish what I start - at least in the last few years because I finally have a better handle on my personal fit and style. However, one thing that’s been haunting me since way back in 2015 is this: 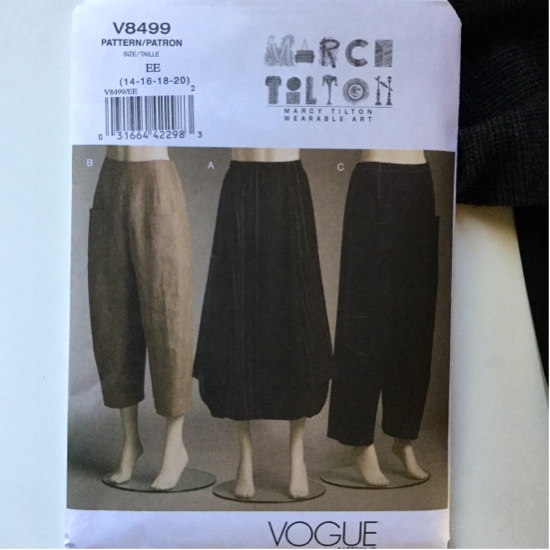 This Marcy Tilton pattern is from 2008. Ten years old now, but who’s counting? In the fall of 2015 I had some charcoal plaid wool suiting in a very light weight and decided to make the skirt with the very cool cargo pockets. But since the fabric was so very light and creases like crazy, I decided it needed an underlining of black cotton batiste. (Here’s a good explanation of underlining. It’s not the same as lining.) So far, so good. Until I decided to get tricksy and make a few innovations. For instance, I wanted a small pocket inside the large one and I wanted the large one to button closed instead of zip. With big buttons that needed support underneath. Not too complex so far but then I tried a technique I’d seen somewhere to underline in a way that added enough fabric to fold around the seam allowance of the fashion fabric and finish the edges. It ends up looking like a bound (Hong Kong) finish. Cashmerette has a great tutorial here.

Ding-ding! Bad idea. This nifty technique actually only works on straight or straight-ish seams. And this skirt has curves at the bubbled hem. You can’t clip the curves to lie flat if they are already encased. Not to mention that the cloth doesn’t turn neatly around the curve. Plus I couldn’t figure out how to incorporate the also-curved hem: 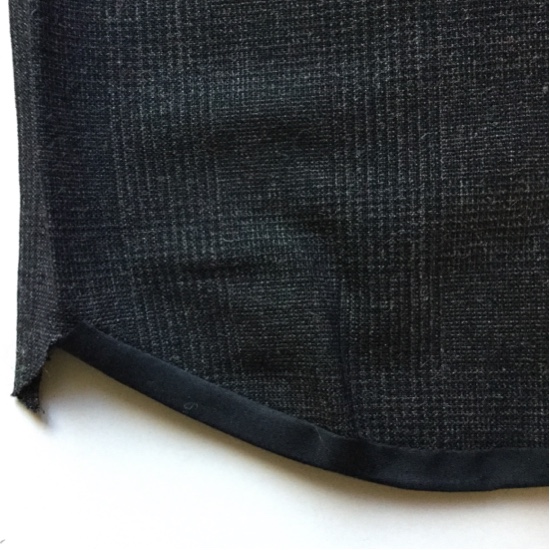 Anyhow, the good news is that I only sewed the side-front pieces before I realised it wasn’t going to work so there’s only 4 long seams to unpick. 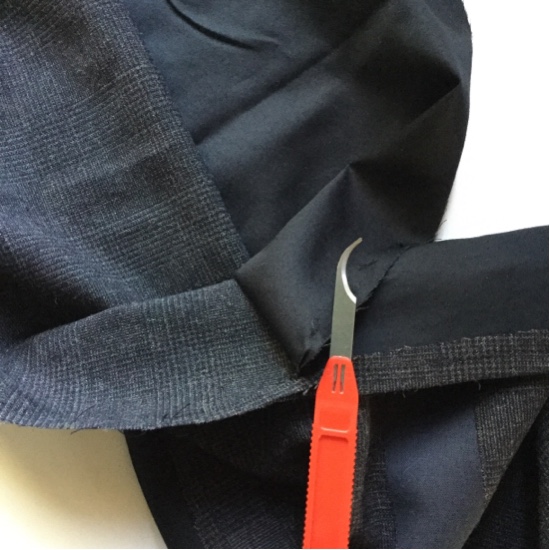 The bad news is that I was so annoyed with it that I’ve left it to stew for over 2.5 years! I’m not even sure I would choose to make this skirt out of this fabric if I had a do-over. But I’m at this point now. Everything is cut out. The pockets are made and the small ones attached but the big ones aren’t stitched on yet. I can finish the edges with the serger or something. I can salvage this project if I can dredge up some patience! There’s even some colder weather left to wear it in if I get my skates on.

One new change I can still make is to shorten the skirt at the waist. This will do 2 things: give me a little more ease at the waist so the skirt won’t keep riding up over my tummy (and maybe get away without inserting the zipper which is just dumb in an elastic waist) and to shorten it. I originally chose a fairly small size that just fit my measurements and right now it’s nearly at ankle length on me. I don’t like wearing long skirts. I like the look okay but they get in my way, trip me up and generally annoy the heck out of me. My balance is wonky enough as it is without having to lift my skirts to walk up the stairs! Elegant lady, I ain’t. Mid-calf is long enough which I kind of suspect was the original style idea anyway. I’m just shorter than the target market. Heh.

Side Effect. So now having a close look at this pattern has made me want to make the shorter pants view also. In linen. For summer. Did I just make my to-make list even longer? Yeesh. So much fabric. So short the days.

Meanwhile, my seeds are starting to sprout! Aren’t they adorable? 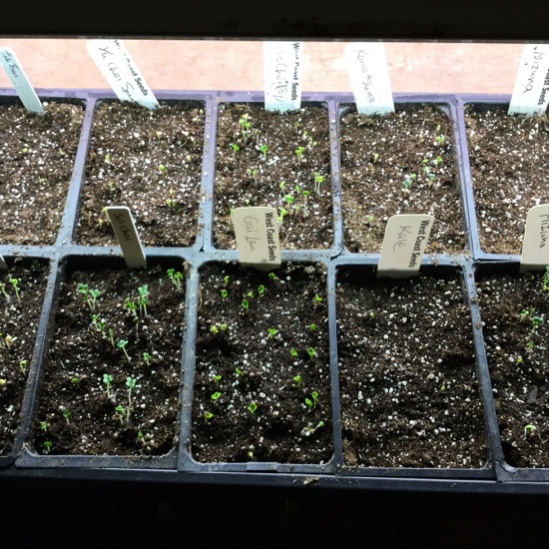 happy to hear/read that you are safely home, So impressed with your seedlings, guess I need to get busy.

It’s been so cold it’s hard to get enthusiastic about gardening!