Here’s the latest project out of the atelier, the Leafy Metamorphic Dress: 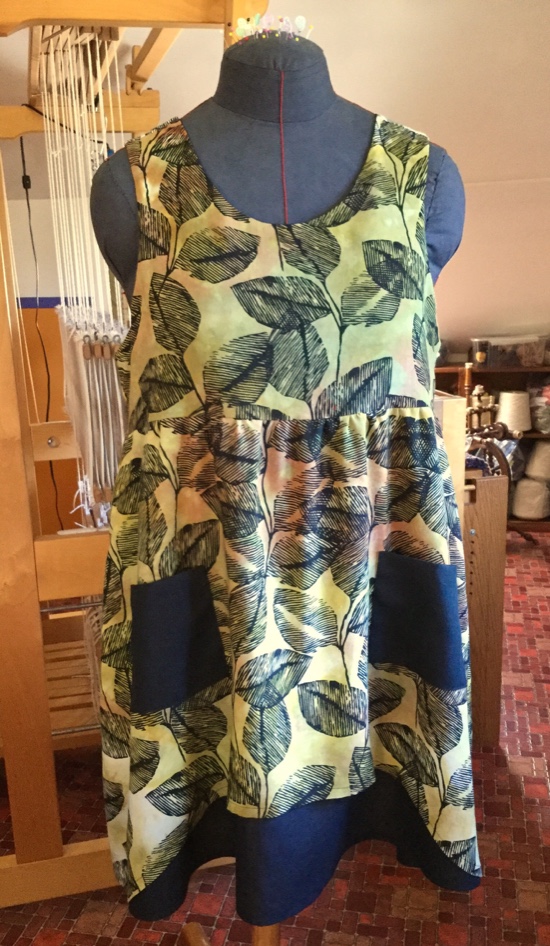 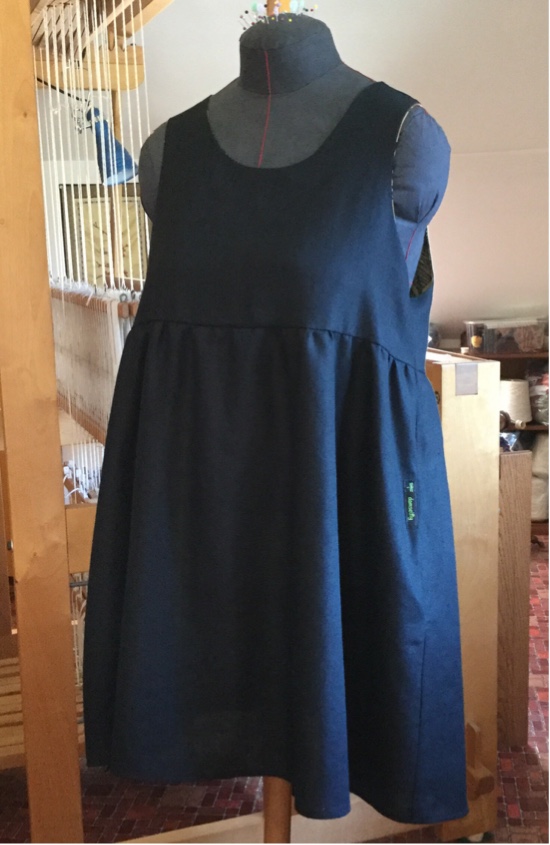 The pattern is by Sew Liberated, the Metamorphic Dress. It’s two dresses in one, both with pockets - patch pockets on the top and inseam pockets on the under dress. The top layer is cut away front and back at the hem (I only did that to the front instead of both) to let the underlayer show. The two dresses are sewn together at the neckline and armholes using the burrito method. It’s an interesting way to assemble a lined bodice that I hadn’t tried before, though I’ve used burrito on shirt yokes and pantie gussets. The instructions supplied in the pattern were barely adequate but you might want to google a tutorial if you haven’t experienced the burrito method before, especially on something like this where you have to roll the dress up twice, once for each armhole seam. It would also be difficult to impossible with thick fabrics to pull the dress through the narrow shoulder so keep that in mind. My choices were fine if a little fiddly.

This dress is more like a jumper since it is too loose and low under the arms for bra coverage. I’m really glad I moved the shoulders inward however or they would have been much too wide on me. When I flip the dress over to the dark side, a sliver of the leafy layer shows at the shoulders and neckline as well as glimpses of the wrong side of it at the hem. It’s not a deal breaker but I wonder how often I’ll wear it this way. We’ll find out eventually, huh? BTW I originally wanted the leafy layer underneath but then the wrong side (which is obvious) would show at the front. I definitely like it better this way. The heavier and more stable underlayer supports the soft limp rayon very nicely. It was fun using the black for the patch pockets too.

It was really great to finally use up this rayon fabric that’s been lurking in the stash for a number of years now. I overdyed it at one of our Spectrum study group meetings using Procion MX dyes because the leaf pattern had glitches in the printing (manufacturer’s defect) and I didn’t want it to be quite so noticeable. I managed to cut around most of it but there’s still some ghosting on the back. Meh. Who cares? The black layer is some of that linen that I bought in March at Fibres West. I’m now suspecting that there’s something else mixed in with this. It doesn’t crease easily unlike pure linen and smells a little odd when ironed. A burn test was inconclusive so I’m going with a blend with synthetic. It feels ok and behaves nicely when sewn anyway. Just as well since I’ve already cut out a shirt for Thom and still have a little left for something else. Obviously it shouldn’t have been labelled 100% linen though.

So what’s next? Not sure yet. I saw the brand new pattern from Helen’s Closet, the York Pinafore: 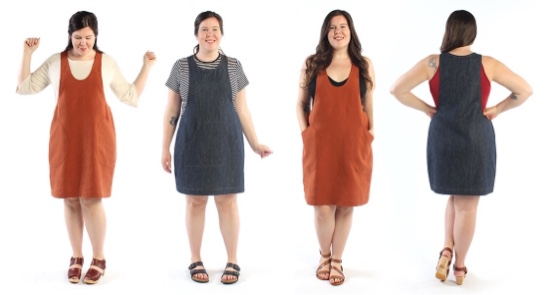 Yes, I bought the pattern PDF already. I like both views! And I might have several fabrics in stash to choose from. I can see making quite a few Yorks.

However, I still have other things already cut out. If I jump the queue will I get back to them anytime soon? Stay tuned.

Meanwhile, with gardening every morning, sewing every afternoon, reading and knitting every evening - no wonder I’ve been falling into bed every night exhausted! It’s a glorious time of year though so I’m making the most of it while it lasts. Green leaves, warm sun, cool breezes and flowers practically springing out of the earth on pogo sticks!

This is cute, Louisa. I like the reversibility you gave it.

I like the leaf print side!! Reversible is good but the leaf print is the best side! Should go well with all your dark solids. The Pinafore is certainly up your alley too - big pockets & a good shape. Not sure but I think I'd lengthen or shorten it . . . . it would make a terrific kitchen or gardening apron with a couple more pockets.