As you’ve probably figured out, when not out battling with the weeds or watering everything in sight or hanging out on the hammock entirely exhausted, I’ve been in the studio sewing. Not as quickly as I would like but there has been progress. I was going to wait until I had better photos besides the quick and dirty ones I posted on Instagram. Then I was going to wait until I finished the next sewing project. And then...I realised that I’m running behind and if I don’t do this now I will completely forget about it entirely. So. Sew. Here we go.

This is the second and more elaborate garment using the Khadi Check fabric and the cotton jersey: 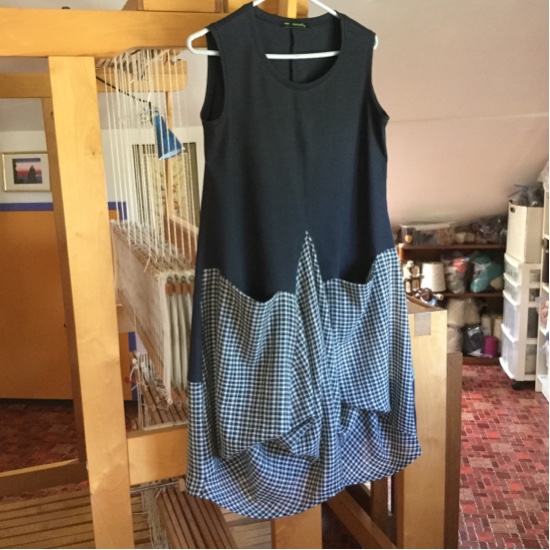 Marcy Tilton’s V8975. The pattern calls for 2-way stretch jersey but really only the bodice area is close-fitting. I had no trouble adding the lightweight woven fabric for the skirt. Apart from the fact that the khadi stretched a lot on the bias and actually needed the not-very-stretchy jersey to keep its shape. As always with Tilton patterns there were lots of wonky, cut-one right-side-up pieces, such as here on the back: 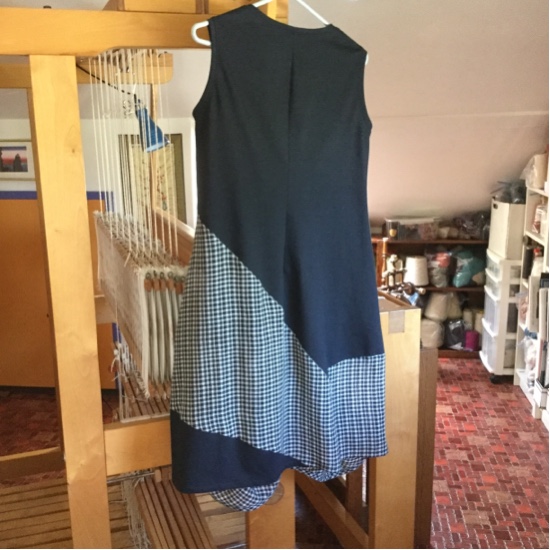 This actually results in a lot of waste fabric because the pieces don’t interlock in a close configuration when laid out to cut. But the designs are such fun that sometimes it’s worth all the fuss. I definitely like my version better than the pattern envelope, that’s for sure. Even if the skirt is semi-transparent so I have to wear something underneath! I’ve already worn it in public and gotten some nice compliments. It’s that kind of dress that’s hard to miss.

Next I wanted something easier to sew after all that fraying khadi but this was surprisingly not at all easier: 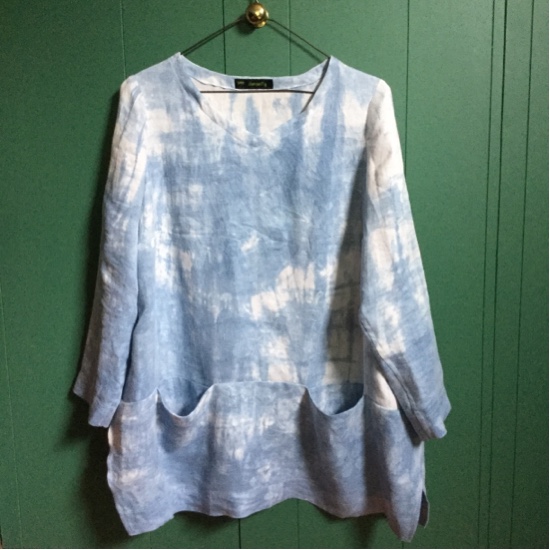 The fabric is an elderly linen jacquard tablecloth, not only well-worn but also put through not just one but two separate indigo vats. There was too much white left the first time so I scrunched it up in the opposite direction. Anyway, the fabric is very soft and the cloth had holes and stains that I had to cut around. Took all one afternoon to figure out. It was fun to use the original hems for the cuffs and hems though.

The pattern is my own self-drafted take on Grainline Studio’s Uniform Tunic. Jen collaborated with a knitter and they published a book together containing a sweater and a tunic with several variations. However, I would have had to do extensive fit alterations anyway so it was much easier to just spend a day and make my own version. There is nothing wrong with being inspired by a garment and copying the style lines for ourselves. Where an infringement occurs would be if I copied the pattern directly and marketed it as my own original. Or if I copied the sewing instructions word-for-word. But this is all my own pattern drafted from my own personal blocks and all I used was a photo for visual guidance. I sewed it with no written instructions, just experience. This kind of thing happens a zillion times of day in the fashion biz.

Anyway, the linen fabric was so soft it was difficult to keep in line. Any angle except straight grain stretched like Silly Putty. My seams were all over the place and I had to use my seam ripper more than a few times. The sewing resembled that of a rank beginner! Yoiks. I also had to repair a couple of holes that I couldn’t avoid but you can’t even see them now. The tunic ended up being really lovely to wear. I have no idea how long it will hold up but for now, I’m really happy with this wearable muslin. I have a couple more pieces of fabric that would make excellent tunics so this one won’t be the last you see of my Uniform-clone.

So now I’m about 2/3 of the way through sewing my Leafy Metamorphic Dress, pattern from Sew Liberated. It’s a two-layer dress, or actually more like an over-dress since I’ll probably only wear it wiith a t-shirt underneath. The cool thing is it’s reversible so more bang for your dress buck! Hopefully I’ll finally get around to a photo while actually wearing it for a change. Yeah, I know. Lazy blogger. Pftthhh... 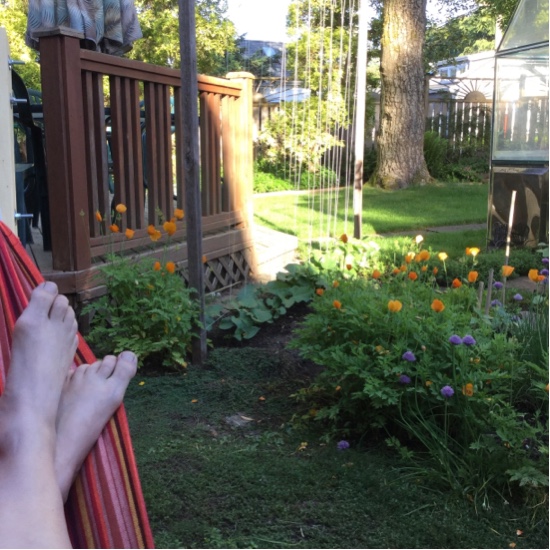 This is where I’ll be if you’re looking for me. See ya later!

So very nice. Can't wait to see it on you. I have that Tilton pattern. Tell me, does it run large like many of her patterns? I happened to have gotten a smaller set of sizes than I usually do and I wonder if it will still work for me. What think you?