Hello, my little twinkle lights! Hope all you Northern Hemisphere folks are staying warm & comfy practicing your hygge and the Southern Hems are staying cool & hydrated! It’s been rather dark and rainy around here but luckily I don’t suffer from SAD, I just use this quieter time to get in the studio. Lots of good lights are mandatory though! I’m sure you want to find out how the bra making has been going, no?

I finished 2 more Ingrid bras since the last post. The first was black & brown: 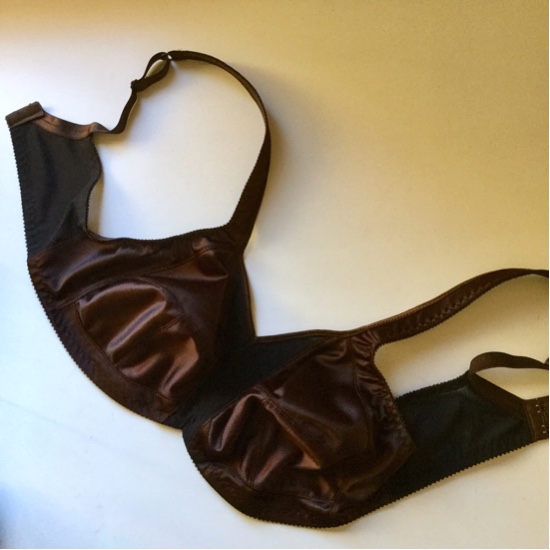 The brown was a piece of duoplex left from a past bra making effort and the brown elastics and findings were a set from Bra-makers Supply that was supposed to be for the Pin-Up Girls Classic bra. I just subbed in some fold-over elastic instead of the decorative elastic in the kit and left out the underwire channelling and the bow. The power net is black because that’s what I have so this bra is completely from stash on hand.

The second bra was the Black Cherry which included everything matching from my last order from BMS. 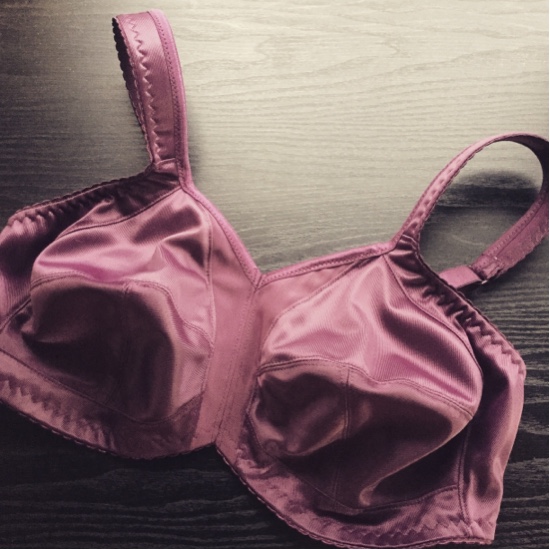 I really got way too much duoplex and power net because I was going by the estimates on the pattern which are obviously for the largest sizes. I wanted at least 2 bras but I could make a half-dozen or more from 1M of duoplex and .5M of power net! But I would obviously need more findings since I only got one Black Cherry kit. Instead I dyed some FOE and a hook & eye so I could complete a soft navy blue findings set: 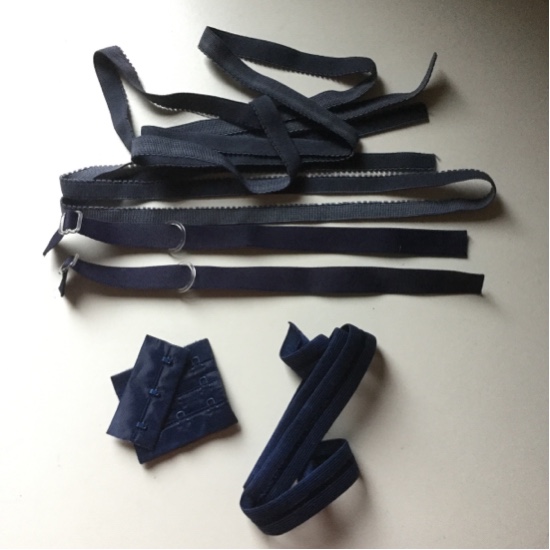 Nylon dyes quite nicely with acid dyes in the craft microwave. I think this will look nice with the black cherry, yes? And then I have one more option for a lacey-ish black bra before I have to order more parts. With all of the Canada Post disruptions this isn’t a particularly good time for mail order so I’ll give it all a chance to cool down first.

So I never did get a photo of Thom in his 4th Thread Theory Fairfield Button-up shirt. Here’s a hanger version even though it’s already been worn, washed and ironed once already: 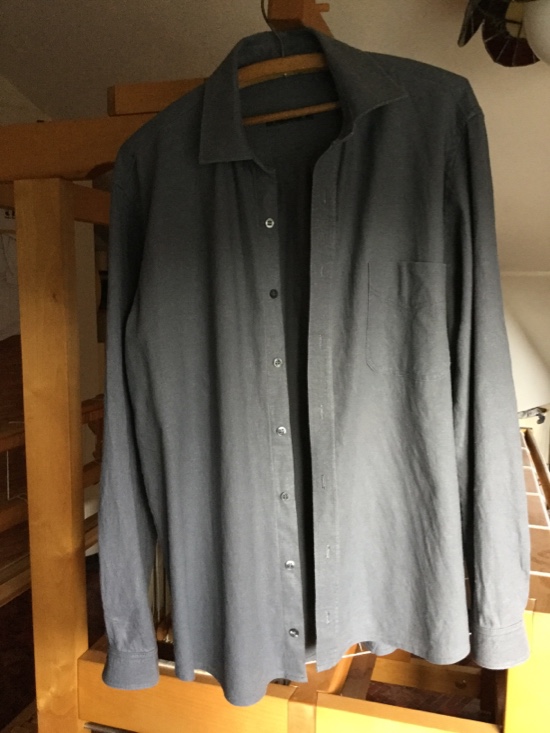 Yeah, not exciting, I know. Grey linen (exactly like the green stuff of his last shirt) on a grey day. The buttons were rescued from a worn-out shirt and match perfectly. I made a single rounded pocket and rounded cuffs to match. Otherwise, same old same old. He loves his Fairfields!

And speaking of sewing for Thom, we were watching the new season of Shetland on Netflix and he suddenly decided he needed a peacoat like Jimmy Perez wears all the time. Luckily Thread Theory has the Goldstream Peacoat: 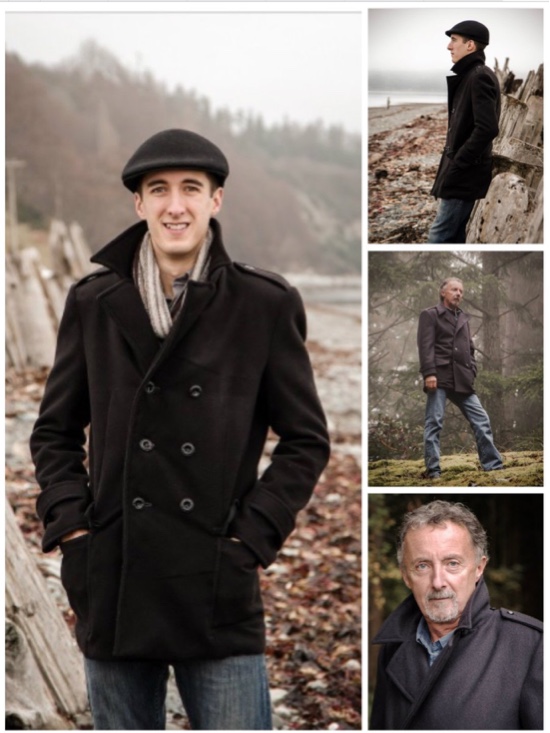 And also conveniently had a (dare I say it) Black Friday sale so I bought the pattern. 99-gazillion pages to assemble! Lots of tailoring, interfacings and linings and buttons and such. Oy. We’ve already found the fabrics for it at good old Dressew: 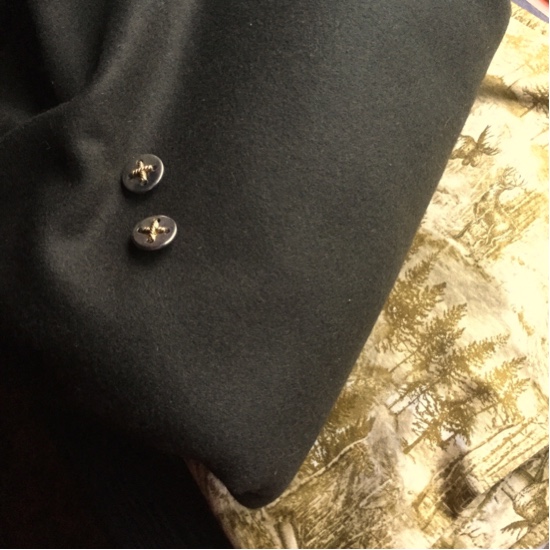 You might not be able to tell but the wool blend melton is a dark olive green and the lining for the body is a quilting cotton with a cabin in the woods, bears, moose, deer and eagles. I’ll go digging in the deep stash for something more slippery for the sleeves though. The buttons are from stash and belonged to his auntie. I’ve even got some hair canvas and plan to make the shoulder pads myself. This beast is going to be a lot of work but it should last him forever. The man has definitely proven that he’s Sew-Worthy because he loves and, most importantly, actually wears what I make him. Pretty soon he’ll have a mostly wife-made wardrobe. Heh.

So that’s not all! I needed a palate cleanser after making 3 bras in a row (whew!) so I finished sewing another York Pinafore that had already been cut out. Persimmon Head! Yummmm...er, this was a quick photo before I lost the light so I just popped the pinny on over my t-shirt dress. I love the pannier pockets! They’re from the York Apron add-on pattern. Do not tell me they aren’t flattering to the hips. I don’t care. They’re so practical! Wish I had this York back when the garden was in full production but there’s always next year, right?

The fabric was a 1M piece of black/grey denim with an abstract print. It’s much lighter weight denim than my first York. I just barely squeezed the pattern in with only tiny scraps left. Not shown is the bias binding I made from a wee piece of grey and black striped cotton/poly. I love using up stash. With this third version I think I have the York fitting just the way I like it now. More to come in future. I love that it’s so practical, takes very little fabric and works with either heavy or lighter weight materials.

So lastly I do NOT want to discuss my knitting. It’s still giving me fits. Things keep going wrong. I haven’t come close to finishing anything. I have no idea why that should be so. But I’m not giving up. Just taking time to cool off.

Meanwhile, I’ll leave you with this lovely photo from the False Creek Seawall on our way to Granville Island on Tuesday. Gotta get out while the getting is good! The tide was extra high (called King Tides) and, goodness me, there are an awful lot of highrises downtown now. Looks lovely there but it rained on us just three blocks from home on the way back. Ah, Vancouver. 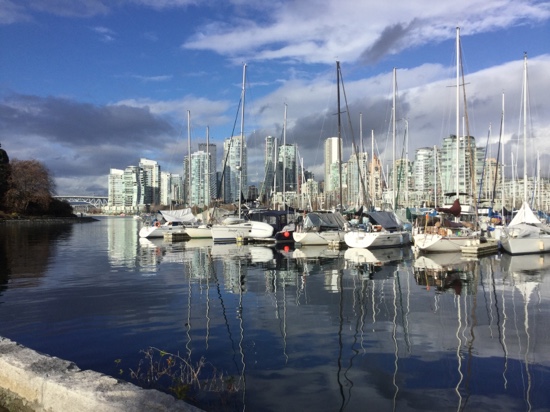 WOW!! A Jimmy Perez pea coat!! You are ambitious. He'll look wonderful in it!!! I can't wait to see it in progress. Ahem, I bought the whole Shetland series because I love it, even though Ann Cleaves' Jimmy is dark haired & olive skinned after his Spanish sailor ancestor. I'm not a big buyer of shows but I have all of the Foyles War series & am starting to get Endeavor as well. I also recommend Hinterland.
And I love your Pinny too!! Man, those pockets really turn me on & would work wonderfully well for a sore handed gimp like me. I could carry all sorts of things . . . .

Awww thanks, Sharon! I love your enthusiasm! Yes, we’ve watched and enjoyed all those series. I know he doesn’t match the books but Jimmy is believable anyhow. I always try to take books and film as 2 completely different things otherwise I waste time comparing and I nearly always prefer the book version. Take care of those hands, girl!

I just have to say that I am beyond impressed that you are making your own bras...as in constructed bras with many parts and actual shaping!! The closest I have ever come to that was making my own "sports bra" type bras, which were basically a smooth stretchy bodice with elastic, rather like a shelf bra in a swimsuit, and not for wearing under streetwear. Your sewing inspires me. I look forward to seeing where you go with the peacoat project, and hope that your knitting learns to behave and be obedient to your wishes...I particularly like your new grey pinafore, but then as you know, I am a great fan of both linen, and of capacious pockets!

So sweet of you to say I inspire you, Alison! You make some truly amazing things yourself! Sorry I haven’t been commenting on your blog lately since some update or other has messed up. I can no longer comment on fellow Blogger posts with my iPad! Grrrr.