Seeing In The Dark

Winter, as we usually see it here, is in full spate! Rain, rain, wind, more rain, and dark-dark-dark. The basement is springing a few leaks which it only does if we get more than our usual rainfall in a very short time. The biggest leak is in our cold-room under the front stairs where the concrete floor is currently a swimming pool for the monster spiders and their prey, the wood lice, who live in there. Luckily we never keep anything on the floor to get wet. Wine bottles, canning jars, potatoes, onions, pop cans and the like are safely on shelves above the swamp. There’s good air circulation in this little room because it was properly vented but if it doesn’t dry up in a reasonable length of time, we’ll be using the wet/dry shop vac to suck it out. Better than the other leak in Thom’s woodworking room. The walls and floor are more finished and there’s a lot more stuff on the floor. He says he’s monitoring it and mopping up as necessary. I hope.

Meanwhile photography has been rather difficult when it looks like twilight in the middle of the day. I managed to get a picture of the finished Coffee Cosy that I made the other day when it was sunny out for awhile: 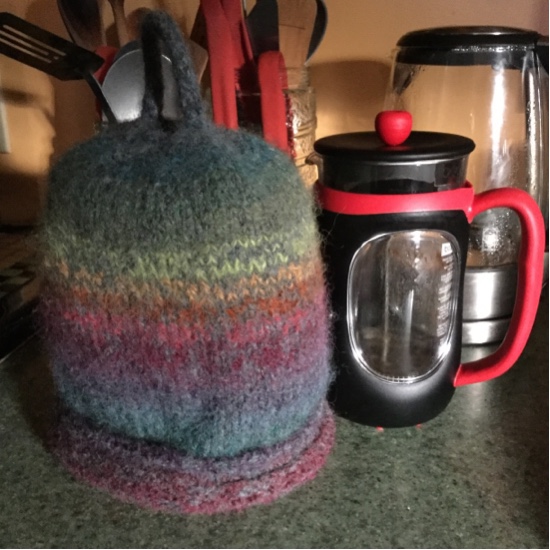 When our fancy-schmancy electronic coffee maker croaked, instead of getting a similar replacement Thom decided a Bodum French press would do the trick. Since he’s the only one who drinks coffee around here and we have to boil the kettle for my morning tea anyway, it works just fine for our needs. However he needed the pot to stay warm until he was ready for his second cup, hence the cosy. I used the same pattern that I did before for my French press for tea that we keep in the VW Westie for camping. “Thinking About Coffee” by Lisa Risager is a free pattern I found on Ravelry but this time I didn’t have any bulky handspun so I used 2 yarns from deepest stash held together. One was a blue-grey 2-ply (possibly Condon’s) wool and a handspun Romney rainbow chain-ply. The results turned out fine though it took quite a lot of work to full it sufficiently and it’s still too long. Probably because I knitted several more rows before the decreases than I should have since I was chatting with friends at the time! I just turned up a cuff. Problem solved.

I also finished my Lacca Laneway sweater but it’s taking forever to dry after blocking. Also, dark. I hope to grab a photo whenever things lighten up enough. I really like it although it’s more like a dress than a tunic. The pockets are a little low even though I raised them an inch (my T-Rex arms!) and the sleeves gave me trouble before I was done. The pattern had them at a full length but I wanted my more comfortable 3/4 sleeves. Somehow I forgot to make a note and edit the pattern accordingly. In the end there was a ridiculous amount of frogging and reknitting various parts of this beast mostly from not paying enough attention to what I was doing. I used the last of the darker lac red for the pockets but ran out with a couple of inches to go so I finished them in the lighter mauve. The red is the part you can glimpse while wearing anyway. All together it took me almost 6 months to finish. That’s a long slog for me even for a fine gauge sweater dress.

So since you aren’t getting much in the way of project photos I thought I would talk about my personal style. Now that nearly all of my wardrobe is handmade, I’ve been trying out new combinations of garments. My chilly winter house has encouraged the layering! Interestingly there aren’t that many sewists or knitters who show a similar style to mine and if they do, their body shape is usually differently proportioned than I am. That said, I do take elements of style and inspiration from several sources. My favourite tool that I like to use to hunt down and save ideas is good old Pinterest. Another tool is OneNote which I use as a large whiteboard to stick photos and notes for further consideration. I used to use Evernote (free version) but the combination of Pinterest and OneNote seems to work better for me. YMMV as they say.

Anyway, one person whom I discovered on Pinterest (and can find nowhere else) who’s style I admire is Elizabeth Eins: 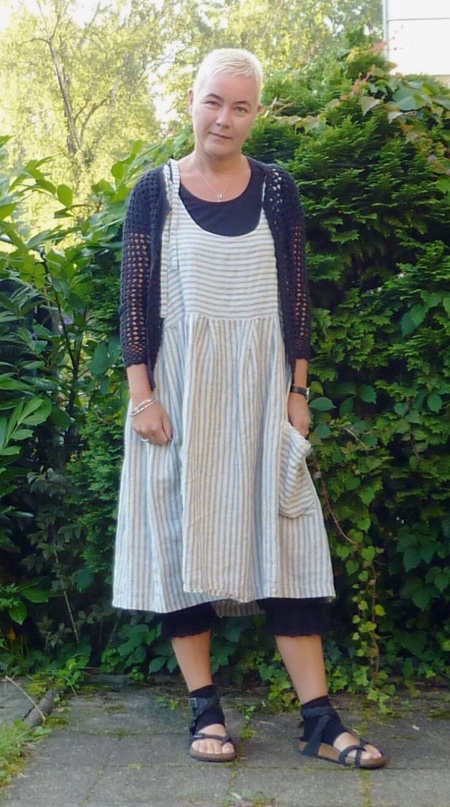 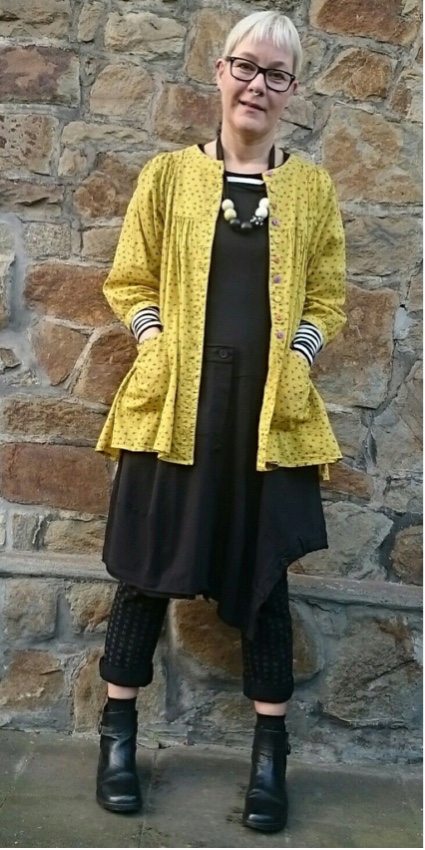 Elizabeth (who I think is from Germany) wears a lot of Gudrun Sjödén:

And Ewa I Walla: 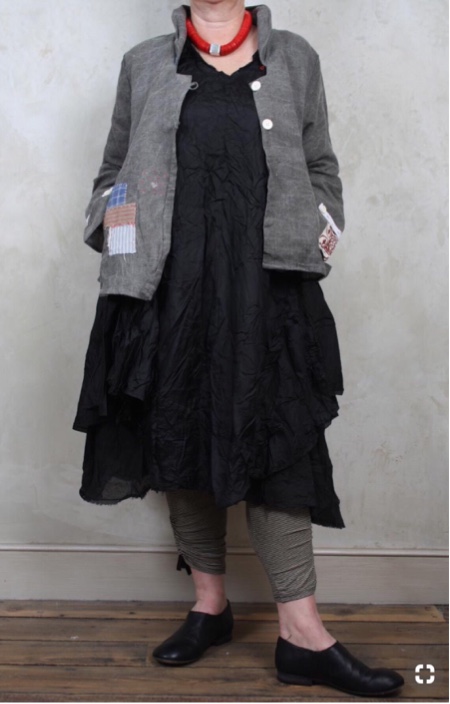 Both of those are Swedish designers whose clothes I like to peruse. Some individual pieces or occasional combinations from other designers appeal to me too. This one is Krista Larson: 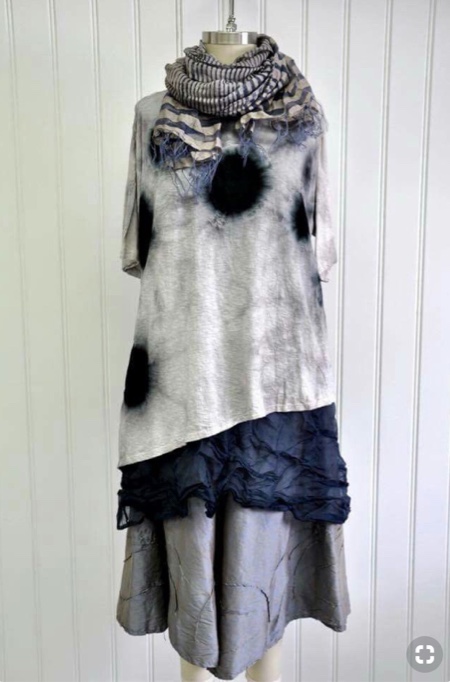 I love the tie-dye in this one but sometimes her stuff can be too much for me. I can’t handle a lot of frou-frou! Another design house that can have great pieces and combos but also can be over-the-top is Studio Rundholz:

This summer style is more restrained but brighter than usual! I also am fond of a lot of the Japanese styles but sadly can’t really wear them since most are designed for a less curvy body type than mine. Check this Dark Mori (forest girl style) out though: 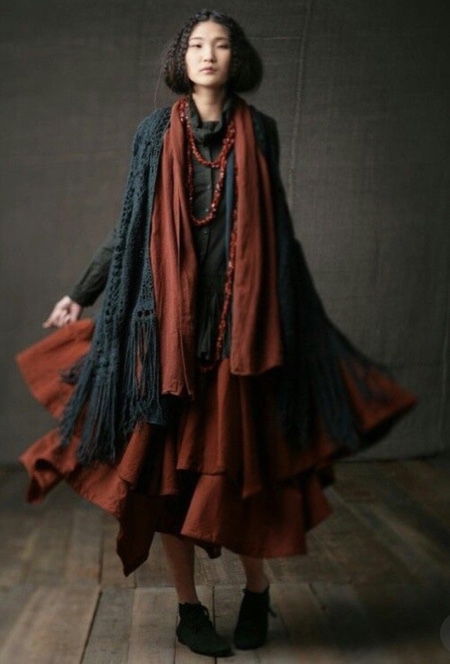 She’s got the layering thing going bigtime! Sadly I am not happy in too many layers and also prefer my shoulders and arms to fit more closely than a lot of the Lagenlook styles. Some things are just too baggy all over like this outfit from Kaliyana: 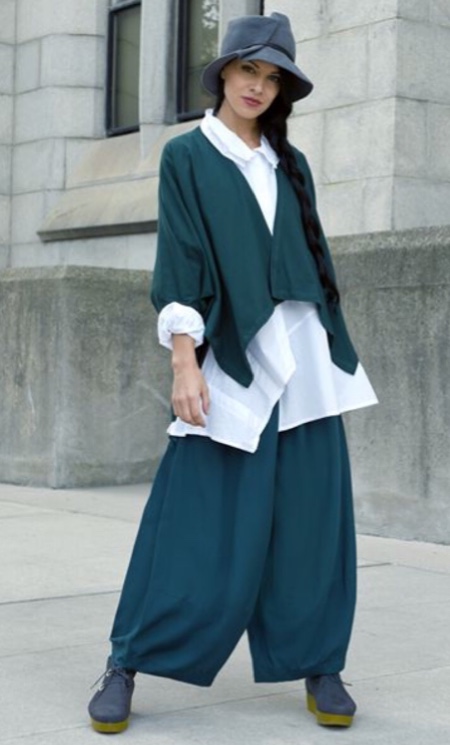 It has some good elements but I would take down the volume a lot. It’s a good thing I sew (and knit) because there is no way I could dress the way I prefer otherwise!

Anyway this is getting rather long and I think I’ve babbled on enough. I hope you’ve enjoyed my wee tour of some of my clothing inspiration. I have to go turn on some more lights now. I’m so looking forward to Solstice and the return of the sun. Only another week to go.

" It’s a good thing I sew (and knit) because there is no way I could dress the way I prefer otherwise! " I can say the exact same thing... t-rex arms and all!! I'm going to have to check out Elizabeth Eins.. as the images you showed look very appealing (I'm not as fond of Krista Larsen etc, as I don't really like that random pleated/ruched skirt thing). I must say that I also like quite a few of the Gudrun Sjoden clothes from time to time, as inspiration... they do some very fascinating things with combining patterning, and with layers. My last years Alabama Chanin style cardigan was inspired by a Gudrun Sjoden wool sweater...

I just googled Elizabeth Eins and she is also on Instagram:

Thanks, Alison! When I searched for Elizabeth her link didn’t come up for some reason. I find her style very inspiring!

I have to say I'm more the tailored type. Layers to me are a jacket or sweater added. I would rather wear a thicker pair of pants or a quilted tunic than three layers of 'stuff'. Gets in my way & makes me feel 'trapped'. I have changed my whole wardrobe to heavy sweats in the winter when my basement is cold & shorts or leggings & tees in the summer when it isn't. Getting shoes & socks onto my right foot when my knee won't bend takes enough time so I've reverted to childhood clothes. LOL I must say, my heavy purple hoodie is so warm & comfy that I hate to take it off sometimes!!
Keep it up. You know what you like & what you want. Don't change! Just add some more pops of wild color, like that orange.