Hope everyone had a peaceful and safe Solstice/Christmas/Yule or whatever you might celebrate this time of year! Mine was lovely with lots of family, food, laughter and no drama. It’s all good, right? Now I can go back to being a semi-hermit! Yay.

In the Buy Your Own Presents Department, I usually avoid shopping like the plague this time of year but I finally decided that my old Black & Decker iron needed replacement. I did everything I could to clean it but it was piddling all over my sewing and not turning off when it should. I’m not sure of its actual age but it’s probably 20 years old if it’s a day. Doesn’t owe me anything, does it? It’s been a good beast but it was past time for a replacement. A sewist needs a functional iron! I did all the usual online research, reading reviews and checking prices and availability. Irons all seem to have rave reviews right next to don’t-buy-this-piece-of-crap. Either there are a lot of lemons or a lot of trolls dissing everything. Who to believe?

I wanted a mid-range mechanical “professional” steam iron with all the usual adjustable temps, steam, spray, extra shot of steam etc. How hard can it be to get one that works properly for a reasonable price? There are quite a number of brands but most of them are manufactured in the usual China. I’ve had good luck with Black & Decker in the past but their current models didn’t get particularly glowing reviews. I didn’t want a digital iron or a retractable cord so that narrowed the field somewhat. After dithering for a couple of weeks (and cursing my old iron roundly every time I used it) I finally settled on this one: 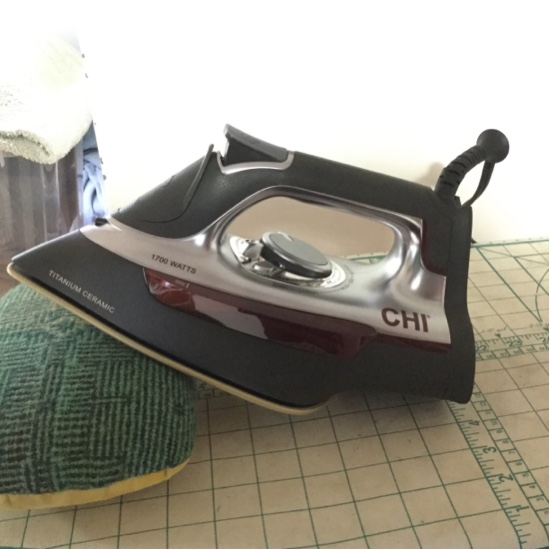 CHI model 13101. Twice the price of a cheap iron but half the price of a comparable Rowenta and on sale so right in my ballpark. It’s not a brand I was familiar with but apparently they originated with hair straightening irons and branched out to clothing irons. Kind of sporty looking, isn’t it? The base is titanium infused ceramic and has lots and LOTS of steam holes: 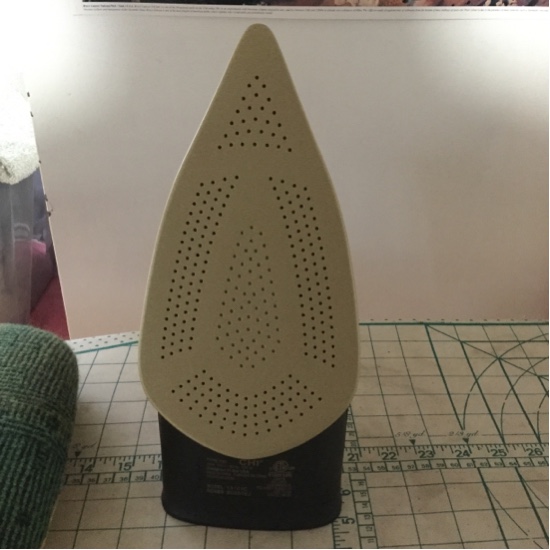 No dropping this thing on the floor, huh? There are several things I like about this iron, a few of which I didn’t realise until I used it for the first time during my last sewing session. It has a swivel cord which is 10’ long, 2’ longer than my old one. The cord seems to get in the way less often. It takes a couple of minutes to heat up to temperature which is quite long to wait but it doesn’t spit or drip. On the other hand, it will wait a whole 30 minutes before beeping to warn you it’s going to turn off. Most irons only wait 10 or 15 minutes to shut off so you’re always waiting for it to heat up again while sewing. It’s slightly lighter than my old iron but not significantly so. I like a medium-heavy iron weight because I prefer not to press down too hard which hurts my neck. The sole is very narrow at the front with a really nice “nose” that gets into tight areas easily. The best discovery is the fact that the steam doesn’t shoot out ahead of the nose so I can fiddle with folding hems and not get my pinkies burnt. So helpful!

The only negatives I’ve noticed are the temperature and steam dials are kind of flimsly lightweight metal. Also the water intake hole is quite small and the red water window is rather difficult to actually see the water level through. I have to pour carefully when filling it. Minor quibbles though really. I’m not very hard on equipment so now we’ll just see how long it lasts. It has a 2-year warrenty against defects but you’re responsible for postage both to and from the head office in Virginia, not especially cheap from Canada. Anyway, I’ve named it Chi-Long (energy dragon) because it talks to itself with little crackling steam noises while it’s waiting for me to pick it up and use it. So go use it, damselfly...

I have a review of my year’s Finished Objects coming up soon! Stay tuned.

Louisa I must say that you are really tempting me with that iron... I have been considering a new iron as my last few have come from Goodwill thrift stores and don't steam at all, as pouring water into them it pours right out again as leaks... so I have been doing all my sewing with simply spraying water onto the part of the fabric that needs steam. I can't remember having an iron that produced steam, and I did get an Amazon gift card as a birthday present this year... I am very eager to see your post on the highlights of your year, as I know that reading your blog has been a treat for me

I think all steam irons leak eventually which is why they were consigned to Goodwill! Obviously you are not going to find a good one there unfortunately. What made me hesitate to buy a new one was the fact that my B&D only leaked sometimes! It finally annoyed me enough to replace it. Now I’m crossing my fingers that this new one behaves itself for a good long time!

I love reading your blog too! Mutual Admiration Society!