Here in the Northern Hemisphere we’re welcoming the return of the sun. Yay!! And today the sun was out for awhile so we actually got to see some of that new light! It’s been so dark. At our latitude the sun doesn’t rise until after 8am and it starts to get dark around 3:30pm. Add deep rain clouds to that recipe and it feels like you’re locked in a closet! The house lights are on nearly all the time just so I can see what I’m doing.

Speaking of weather, yesterday we had one of those once a decade crazy wind storms that knocked out trees and power lines, shut down the ferry system and even killed one man over on Vancouver Island. Yikes! Our house weathered everything just fine except for the usual twigs breaking off the walnut tree and scattering all over the yard. We didn’t even lose power. It helps that we’re on a really stable power grid that also feeds several hospitals in the area. It was a little bit scary though listening to the big gusts of over 100kph rattling over the house.

Meanwhile, I was in deep maker mode in the studio. My 90-year-old mother-in-law recently got an iPad so she could read e-books from the library. Her vision is deteriorating and the eye specialist recommended a tablet. We’ve been trying to convince her for years but she was adamantly against anything resembling a computer! Took the doc to get her to even consider it. Thom set it up for her so that it’s very simple and on his weekly visits he uses his iPhone as a hot spot and downloads any books she wants. She’s currently addicted to Sudoku! Who knew eh?

So in honour of Mom’s new entry into the 21st century (LOL!!) I made her a pyramid rest for her iPad: I used some vintage bark cloth from stash along with all the usual stuffing, mat board for the bottom and a stablizing rock. Hers isn’t as heavy as mine and it was somehow a lot easier to sew this fabric than it was the heavy upholstery swatches that I used for the first two pyramids I made. Or maybe it’s Janny, my new sewing machine? This only took a couple of hours after I dug out all the materials and most of that was hand-sewing up the final bottom seam. I don’t even have a pattern anymore since I can’t find where I stashed it. Or even where it came from originally. I think it was a magazine article. Anyway, I’ve added my own tweaks so I just wing it with a ruler and a rotary cutter. The pyramid is a great help on your lap or table to hold up your screen and save your wrists from fatigue and pain. I use mine every single day.

I finally finished that knitting project that got stuck on my needles for half a year! Behold the Lacca Laneway:

This thing gave me so much trouble! Nothing at all wrong with the pattern (Laneway by Veera Valimaki) but my attention. It was a LOT of round-and-round stockinette stitch so I was merrily reading, watching TV or chatting while knitting. Yarns twisted. Mistakes happened. Frogging ensued. Re-knitting occurred. Finally finished and got all the ends worked in. After blocking I realised that as usual with superwash wool and nylon sock yarn, it relaxed and stretched lengthwise. So now it’s more of a dress than a tunic. You’d think I would learn after so much knitting, wouldn’t you? I could have saved myself several inches worth of work! Oh well. It’s perfectly wearable even if the pockets are too low.

The other FO is my Violet Tie-Dye V-Neck Alder Dress: 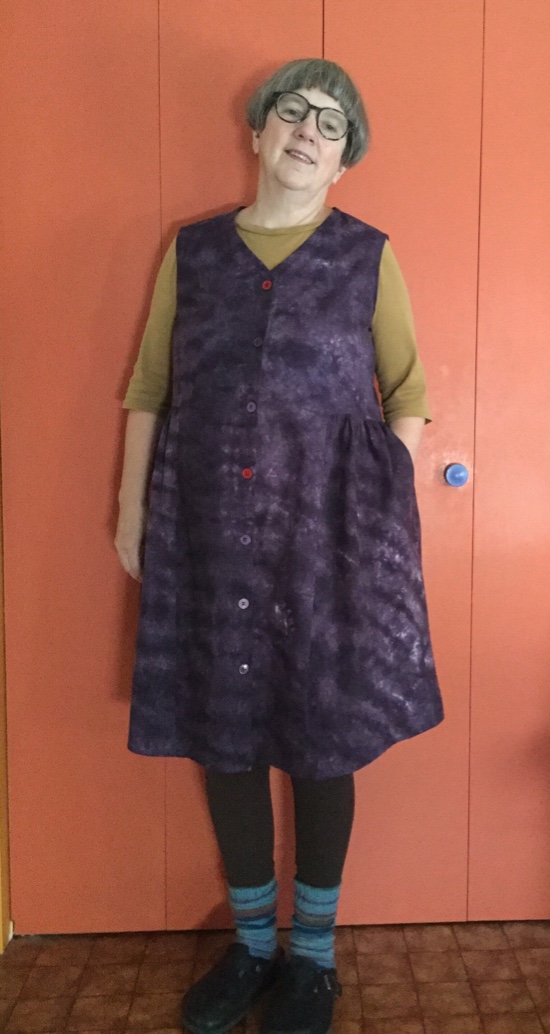 I used Grainline’s V-Neck online tutorial to hack the pattern. It simplifies the dress quite a lot. I also made a few more fit tweaks from the first version and I think it’s just about perfect now. A little longer in the skirt and the waist raised slightly, plus the darts lowered and a small slice out of the underarm. Now I can also wear it as a jumper. Since I finished a summer dress in winter it’s good to be able to layer it up until it warms up enough to wear it solo, no?

In other news, I bought myself a present: yet more bra supplies from the aptly-named Bra-makers Supply in Hamilton, ON. This time I went for some closer to skin-neutral (for my skin at least) colour, called “light copper”: 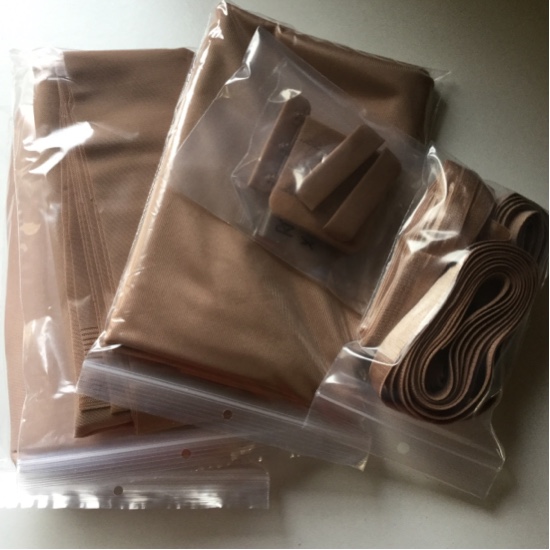 It’s a little darker than “beige” which you can see in the foam padding at the far left. I wanted to make a few bras that worked better under lighter or slightly more sheer fabrics than my usual black, brown, black cherry etc. (I’m not particularly a fan of white bras although I also have some stash supplies for one, I think.) I also got some more elastics and hardware in black: 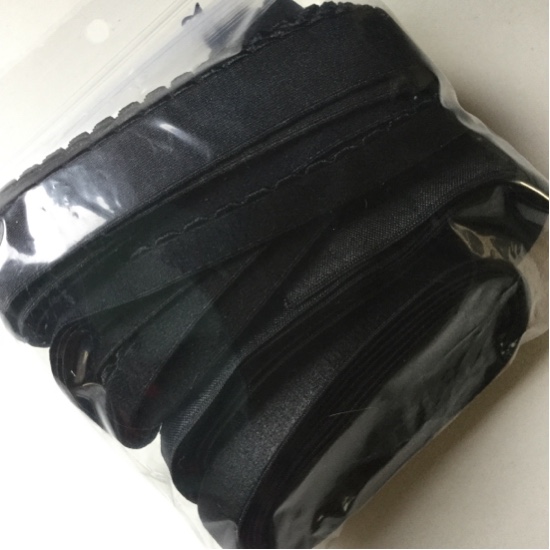 So I now have enough parts for a whole bunch of new Ingrid bras but unfortunately they’re going to have to wait for a little while while I finish a few other sewing projects first. I have 2 garments cut out ages ago and still waiting and I haven’t even started sticking the pattern pages together yet for Thom’s Peacoat. Always lots lined up in the Making Queue!

Wishing you and your loved ones all the peace and joy of the season - and none of the headaches and big bills!

And a Happy Solstice to you!! Love the tablet holder/stand - I must make one for my eReader. I tend to pull out my wallet & lean it against that but I really like your triangular rest a lot better. Too bad your 'sweater' turned out so big but it still looks warm & snuggly & may make a good workroom outfit on those colder days. Like the V-neck especially the gathers at the hip!! I think it would make a great summer dress. OMG - it's NOT raining outside . . .

Happy Solstice to you and Thom. Wow, you've been working (as usual). I can't believe you knitted that entire dress. geez. I really like the purple tie-dye jumper. Very nicely styled. From bras to pea coats, this gal does it all!

Awww...you are so sweet, my dears! Pao, I wrote a whole response on your latest post today but it wouldn’t go. I hate Blogger! It doesn’t cooperate with my iPad properly at all and they never fix it.