Hello there! Yup, still here. I have been somewhat remiss this month though, haven’t I? Did anyone see the fabulous Wolf Moon last week? We were luckily able to watch it from my son’s MIL’s apartment with an unimpeded view. Although the end where the earth’s shadow moved off came after we got home so we were peering through the walnut branches by that point. It was an amazing sight! Usually covered by cloudy skies so we lucked out this once. Oh, and my baby boy turned 45. We were supposed to be celebrating for him, I think? How did that happen? At least the moon is older than any of us.

So, I wonder if any of you lovely readers have been able to keep up with the parallel and related discussions going on in the blogosphere and Instagram? I’m not going to rehash anything here but the first debate was about BIPOC (yes, I had to look that up too - Black, Indigenous and People of Colour) and the lack of support/visibility/participation in the wider maker community. Ooh it made me think! Bigtime. I went through all the usual “but I...” stuff until I realised that, yes indeed, I do benefit by my White Privilege even while living in as multicultural a place as Vancouver and, no, I can’t use all the usual excuses for why not. I needed to see that if I’m not part of the solution then I’m actually part of the problem. More work to be done there, damselfly. Get on it, stat.

And then of course the talk segued into all the other “-isms” like ageism, eliteism, classism, and of course that big one, sizeism. Specifically what the indie pattern designers are doing to be more inclusive in their size ranges. As I might have discussed before, I’m a Betweenie: not quite “standard” sizing and not quite “plus” sizing. I fall into the cracks in-between! It all depends on the particular pattern, the built-in ease and my idea of how things should fit. But the upshot is that I can get most of the indie patterns to fit me - usually with some major surgery to the shoulder/armhole area to accommodate my diamond/potato shape - even if they don’t go into the plus sizes. Though I have to admit, I’ve been shocked a time or two on how I had to hit the very largest size (or past it) in the waist and hips! I don’t think I’m that large. Really. My darling daughter has much more difficulty than I do for pattern sizes but at least she can find some shops where she can buy RTW that fits reasonably well. I cannot. Good thing I can sew, eh?

The good news is that some of the indies are working on or have already expanded their size ranges. Others seem to be suffering from Thin Privilege and can’t see their way through to working on this issue. Their excuses remind me of my first thoughts on White Privilege. Somebody (besides me) needs to do more work! They might not be saying it out loud but I’m hearing that I’m not the “target market”... Maybe I’m not. But if I’m not even allowed in the door to look...

Some indie pattern companies are officially on my no-go list. Sigh. Yeah, call me chicken. Or I’m just too lazy to name names and link links. It’s late. Nevermind. There are lots of other people who are better able to discuss this subject than I can from my white, cis, hetero, short, fat, old point of view. Go hunt them up and read. It’s worth the education, I promise.

Meanwhile, here’s the pullover that I made for Thom: 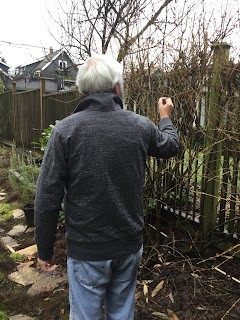 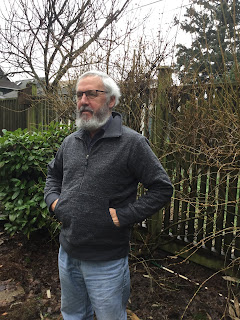 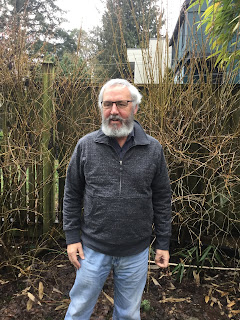 He totally loves it and has barely taken it off since it came out from under the presser foot! This pattern (mostly) is the North Star Hoodie/Pullover from Love Notions although I used the Thread Theory Finlayson sweater to adjust the depth, width, armholes and sleeve cap dimensions. I used the Finlayson because it already fits him to perfection and the North Star seemed like it would be too baggy in the armhole area. The fabric is a double-faced knit in a charcoal marl on one side and plain grey on the other so I used the grey as accents on the marled main body. I interfaced the collar which was a good idea since it gives it some body to prevent it from being too floppy. He definitely likes a “popped” collar! The zipper was in my stash and has grey plastic teeth on a black tape and an opening style which didn’t matter because I cut it off anyway. The longer length meant that it was easier to sew and I was able to pop off the excess teeth that would have been caught in the seam with wire snippers. It’s a heavy-weight zip so that made it much easier to sew without breaking a needle. Now of course he wants more of these. We’ll be on the lookout for suitable fabrics in future.
Coming up next - a raft of bras. Yup, I’m bra-obsessed. And loving it!

The Dreamstress blog wrote a very good piece yesterday as she is an indie pattern maker among many other things. Her patterns include larger sizes but she writes about the cost of this to the indie pattern maker who is probably operating on a very tight margin. A very good article, indeed.
You’ve made your man a very nice pullover.
Love the dress you posted in IG.
Looking forward to seeing your future post on bras.

Love that pullover you made for Himself. Looks good on him!! Good color, excellent fit! No wonder he wants more. On the pattern front - I haven't bought one in eons & don't intend to because they'er never big enough in the bust. I found several that I loved years ago, spent time making them fit a G bust & never bothered buying any more. I made a couple of patterns from tops I bought & loved - just cut them up & ironed on interfacing & Bob's Your Uncle, a pattern that fits, more or less. Now that I'm old, I haven't sewed much in the last few years except knits.Took a couple of classes & learned how to make Knits that Fit - sooo much easier & the pattern is easier too. Shorts & Tees in the summer & Sweats & Tees in the winter - who needs anything else??? This is Vancouver!!! I do make undies from simple cotton knits but I may try bras this year . . . .