Hope everybody had a lovely Easter/Passover/Whatever-You're-Celebrating with family and friends. We had a lovely ham and a plethora of potluck dishes at my sister’s. The organic chocolate bomb cake was sooo yummy! Got the garden tour of my sis’s quarter acre and it definitely looks like spring with the blooming trilliums and flowering currants. We even went home with a dozen of her chickens’ eggs — a very Easter-ish symbol, doncha think? Her new chickens are doing very well after her little pet flock was decimated two years ago by an over-zealous government concerned with bird-flu (which her birds didn’t have). It’s nice to have your own organic free-range eggs. (Sometimes a little too free when one gets loose!) The rooster would drive me nuts with his constant crowing however! Guess I'm a city girl at heart. Though I'm not any more fond of dogs barking or hot boom cars or big trucks backing up.

Recently I’ve been trying to make the plunge into art quilting, but all I’ve done so far is read about it. You’ve gotta realize I have no interest in making traditional quilts. But I’ve been reading Quilting Arts magazine and it really gets my creative thinking going. Unlike other magazines, it has detailed tutorials but without all the brand name items that one supposedly must have and without the “you too can make one just like mine” attitude. It’s more about techniques and inspiration which gives you the tools you need to make something all your own. I just love the magazine’s Challenges and how different artists interpret the same shape or theme or item. They’ve done angels, ATCs (artist trading cards), angelina fibres, and art dolls — among others. I’ve got every issue except two that are out of print! There was a little Treasure Box in the Winter 2005 issue that’s got me interested to try. It’s small enough to be quick yet it’s also functional. Revised instructions are here. Though be aware the pattern should be 7” across its widest part according to the one in the magazine so you might have to resize it. So far I’ve just printed out the pattern on freezer paper and started collecting materials to make it with. I’ve got lots small pieces of fabrics that have been dyed, stamped, painted, and/or monoprinted to work with. See, I’ve got the non-stick press cloth, the pellon, and the fusible webbing. Threads, sequins, beads…already to go. Just gotta do it! 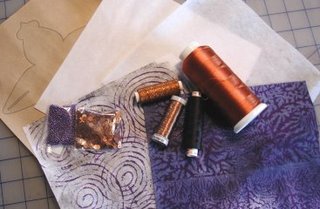 On the knitting front, I’m working on 3 projects at once. Which means of course that it’s taking me forever to get anywhere on any of them. The leaf socks are almost up to the heel flaps, the plain self-striping ones are just about as far along, and the wonky-wacko Vogue vest/top thing is a bit closer to joining together at the front neck. I’m working hardest on trying to finish the top mostly because I feel somewhat guilty about doing it at all. Is it going to look any good or even be wearable? Who knows? The process is a interesting challenge anyway and I guess that’s good enough to keep me working on it. The leaf socks are another “concentration-necessary” project so I’ve mostly been ignoring them at the moment. The other pair of socks is plain so I can read or watch tv and knit on them at the same time. That’s why I’ve gotten so far on them. I was getting frustrated at not having anything “mindless” to work on. It seems that’s really become important to me so, since there’s a ton of self-patterning yarn in the world that I haven’t knit up yet (!), I can always have a pair going for somebody. Is it possible to have too many pairs of handknit socks?

In a comment, Felicia (whose handpainted yarns are sooo delicious!) mentioned:

“I would advise getting the clamp for the Forsyth mini combs. I didn't and it is quite uncomfortable to hold the comb between your knees when you are dizzing off because of the little knobby bit. IMHO”

Thanks for your thoughts, hon', but I didn’t even think to hold it between my knees! Not that I’ve used them A Lot — yet. I was able to diz off by holding the comb in one hand and pulling and sliding the diz with the other. It’s not as fast as two-handed dizzing, but it works ok. I don’t really think of these mini combs as heavy-duty tools, but as something to use while away from home and/or for a limited amount of fibre needing to be prepared at a time. I plan to include them in my “traveling spinning kit” along with my spindles, wrist distaff, and nostepinne. I would use them to prepare some fibres so that I can carry on spinning before needing to prep some more. If I’m on the go, I might not have a convenient surface to clamp to anyhow. I think I’ll try using my mini combs some more before deciding one way or the other. They still need to find their useful place in my fibre life. I already have proper big 4-pitch English combs that I’ve used quite a lot but they are most definitely not easily portable! They scare the livin' you-know-what outta most people and you don't want to lose your concentration for a second while using them. They could do some serious damage!

Uh oh, now even you are getting Felicia and I confused. I either need to get to guild soon, or stop going entirely ;)

I LOVE the big 4-pitch combs and that is probably why I would like to have the clamp for the little ones. I'm just not coordinated enough to diz single-handed.