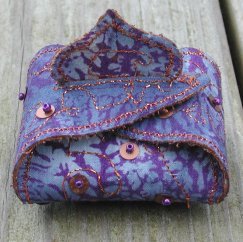 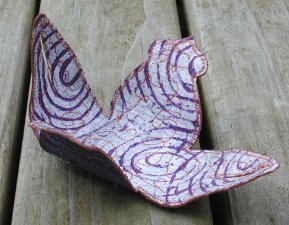 Comments: I used 2 pieces of monoprinted fabrics that I did at my Spectrum surface design study group. I used blue with purple printing for the outside and white with purple and very muted black for the lining. In between I used one layer of fusible pellon and one layer of Steam-a-Seam2 fusible webbing. The instructions say to use an 8” square but unless you increase the pattern size, a 7 or 7 ¼” square would be sufficient.

Stitching was a tiny zigzag around the edges using copper metallic in the bobbin and orange-red rayon embroidery thread in the bobbin. The centre free-motion stitching was done using the same threads but a straight stitch. I had a little trouble with the tensions on both the zigzag and the free-motion and I managed to break a needle when the darning foot came loose. Just shows how out of practice I am!

I finished the box by painting Fray-Stop around all the edges including the slits, and then going over the edges again with copper Pebeo fabric paint. I randomly stitched on Indian copper sequins with purple seed beads using purple sewing thread. Each one was knotted on separately so I didn’t have threads going all over the lining. I Fray-Stopped each knot. I tried to avoid putting sequins and beads where the flaps overlapped.

What the pictures don’t show is how small this is — only about 2” across when folded. I think it turned out kinda cute! It would be a great place to put a pair of earrings or a small bracelet something.

The weather is really cold out even though there’s some sunshine. It keeps raining at night continuing into the morning, then clearing up for the afternoon and evening. Everybody is wearing their winter puffy jackets and hats though I did see the postman in his usual shorts, but also wearing a toque! That proves how cold it is. You know we’re in trouble when it’s the same temperature in Calgary as it is here and considerably warmer in Toronto.

Oh! That is so cute! Thanks for the link to the pattern. I love boxes...especially small fabric ones!