I Didn't Blow Away

Although I did get very busy! The veggie seedlings are now in the garden. The tomatoes are tucked into the greenhouse. The cucumbers and squash are planted under the lights. The peppers are in the cold frame getting used to being outside. I fixed the nets for the peas and planted more because a lot didn’t come up for some reason. Maybe they drowned? It got very rainy after I planted them. Not rainy today though — it’s gorgeous and sunny and warm. T-Man is out in the garden after getting today and tomorrow off work. Picked the best time, didn’t he?

I have a new FO to report. I finished the Vogue Knitting top and it actually fits not too badly. The straps are a bit long (as I feared) and I may have to remove a section and graft back together. I just noticed that even in the not-particularly flattering photo I’ve got one shoulder higher holding the twisted side up! Part of the problem is that I just don’t have good shoulders. All my straps fall down unless they are shaped just so. However I’d like to try wearing the thingy a bit more before I decide for sure to do an operation on it. I think it might be kind of a major ordeal! Hmmm, I also just realized that the lovely big beads on the ends of the braid don’t show in the photo. My photographer doesn’t get that these details are important! And they were his beads too. Well, actually he made two of them and won two of them in an exchange. They were the only ones I had that fit onto the braid and I didn’t want to have to commission ones specially for this or it wouldn’t be finished for weeks yet. They don’t match in any way, but that’s OK. Sorry you can't see them but I don't have time for another photo shoot. 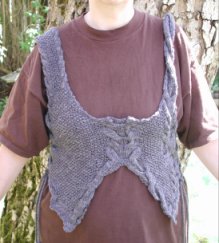 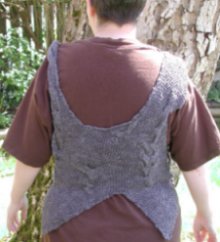 Braids: Kusari Kaku Yatsu (Chained Square Eight) using one 3-yard strand of yarn on each 70g bobbin. Counterweight was 11 ounces, slightly more than half the combined bobbin weight to make a softer braid. I finished the braid by cutting it in half and securing the ends with Fray-Stop. After the braids were threaded through the top I added the beads and tied an overhand knot in the ends.

Comments: I scanned, printed out and annotated the heck out of the graphs. Then I used a Lo-Ran board to help keep my place. It was a challenge to knit but actually kind of fun. The braid went pretty quickly and makes a nice finish. I may need to shorten the shoulders particularly the twisted one since it seems too long. In the pattern it actually is longer than the other side, which I thought was to compensate for the cabling. But it doesn’t! It stretches more and so should really be shorter, not longer. I was thinking that as I knitted it but trusted in the pattern. Silly me! 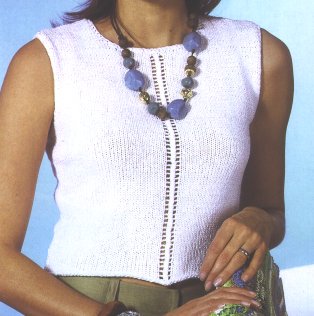 Next project is this shell from Knit ‘n Style Issue 143, June 2006, only as usual, not in the recommended yarn, but in Marks & Kattens Bomull (50% cotton/50% wool) in a greeny-gold. This isn’t a magazine I’ve ever bought before but this pattern was just what I was looking for. I only have 5 balls of the yarn and can’t get any more. I wanted something that would work with it and wouldn’t be too warm for spring/summer. I have a partial ball of black in this yarn also and I may use it to do the crab stitch crochet around the neck and armholes. Depends on how much yarn I have left! I also used some of this yarn in burgundy to knit the swatch. I was testing to see which of 3 different ways to do a double decrease looked best. I tried the centred one (sl 2 knitwise tog, knit 1, p2sso), the usual one (sl 1, k2tog, psso), and just plain old k3tog. I liked the middle one best and T-Man did too when I asked him. It has more of a corded look than the other two and had more definition. The centred decrease looked neat but ho-hum and the k3tog looked a bit messy. I also wanted to see if the bottom hem curls because it has no ribbing (it doesn’t seem to) and to test what the crab stitch looks like (needs a smaller hook than I used). More when I have something worth showing.

What else? Oh, my beaded celestial doll, Mu Ni, is coming along. She has a large swatch of her skirt front done now. It’s so time-consuming but quite satisfying to work on this. I just can’t expect quick results.