I love Esmeralda because she’s pretty, delicious, resistant, forgiving, and reliable. She’s happy when it’s cool but slow to bolt when it gets hot. I keep tearing off her light green skirt and she just tosses her head at me. Wait…what am I talking about? My favourite lettuce, of course! Here she is at her best in my garden: 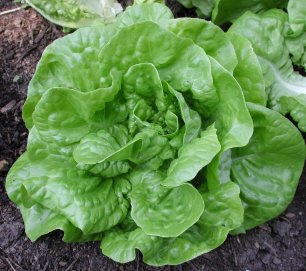 Her seeds come from a local company, West Coast Seeds, and she is just about the most perfect lettuce I’ve ever grown. Esmeralda is a butter lettuce but she’s not the delicate thing I’ve seen offered as butter lettuce. She’s tough enough to resist insects and slugs and her leaves stay perfectly lovely above the first row (which sometimes get a little damaged). The taste is crunchy and mild. And best of all, it keeps in the fridge for at least a week without going mushy or brown. I’ve been growing Esmeralda for about 4 or 5 years now and I just started another bunch of seeds for plants that will go into the fall. I pick only the outside leaves until it starts to head up and then I cut off the head leaving a rosette of leaves on the root that hopefully will grow more small leaves that I can harvest.

And what’s the perfect colour complement to Esmeralda? Merlot, from the same seed company, is a gorgeous deep red leaf lettuce that makes a really pretty salad. It isn’t quite as bolt-resistant as Esmeralda, but it does pretty well. It’s just now starting to think about bolting and it’s been very warm here for almost 2 weeks. I consider that acceptable, especially since the endives, arugula, Tah Tsai, and mizuna bolted weeks ago. Here’s the beautiful (for the moment) Merlots: 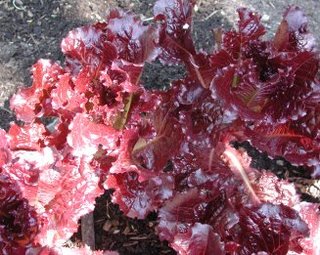 I was picking the mizuna and Tah Tsai sprouts until I couldn’t keep up with them before the pretty yellow flowers appeared. Since you’re supposed to eat the young leaves, the sprouts were actually pretty tasty and keep well in the fridge. Meanwhile, I think the heat has been good for at least some of the summer squashes and the cucumbers that aren’t in the greenhouse. They’re starting to pick up from having their roots munched by pill bugs and who-knows-what-else. The peppers outside look pretty sad though. The peas are almost finished by the heat but the beans are growing better. The Dragon Tongues (I love those!) are bigger and stronger than the other 3 varieties of bush beans. Too bad they lose their pretty purple blotches when you cook them and they become an odd shade of yellow-green instead. The Scarlet Runner beans are taller than me and you can almost see them grow.

In the greenhouse, the cukes are starting to form little fruits and the tomatoes are starting to grab me when I walk in the door! There are lots of little green tomatoes and a few peppers in there but I’m thinking that the eggplants may have been a mistake, warm weather notwithstanding. They haven’t grown any bigger since the day I transplanted them. They’re stuck and if they actually manage to grow a new leaf, an old one gets munched off. Now I know why I’ve never tried to grow them before. And I may never grow them again! Unless a miracle happens in the next 2 months and I see something edible happening.

We’ve had our first couple of blueberries! Much picking to come.

No fibery news today. I’m picking away at 3 or 4 different projects and there’s nothing really to report. Oh, and Happy 139th Birthday yesterday to my country, Canada! Yay! We went around all day wearing red and white in celebration. Resisted painting a maple leaf on my face though we did see a few of those downtown! Tried to sleep through the fireworks. Luckily they’re far enough away not to be a big deal. The Celebration of Light international fireworks contest will be starting soon however, and those wake us up every time. They’re closer and louder and we go to bed too early. Several Wednesday and Saturday nights will be a lost cause to try to sleep until about 10:30pm. Folks are having fun though, so we live with the inconvenience. They are pretty spectacular and if we bother to look we can sometimes see the highest up ones over the houses. Not worth going down to the water with about half a million other people to see it properly. It’s way too crowded and we’d be half the night trying to get home. We’ve done it when the kids were young enough for it to be a Big Deal. Now we’ll let others enjoy without us in the way.

Mu Ni looks great Louisa. Lots of work - how big is she?
Isn't it nice to be reaping the benefits of the garden? My tomatoes aren't a fraction of what they would have been had I put them in the greenhouse but I'm holding off until Jim gets water there. Just need a pump - the plumbing is done. I miss seeing the gh filled up with the greenery.