It’s the last day of June and I finally finished my beaded art doll, Mu Ni. She was due for two July 1 deadlines: the Complex Weavers Beads & Interlacements study group and the beaded_art_dolls Yahoo group’s Celestial Bead-Along. I’m now thinking that she needs a hanging loop from her head and some kind of wire frame to hang from for the “sky”. Might need to talk to the guy with the bigger wire and stronger hands (T-Man) for that one though. My craft wires tend to be soft and thin so my little hands can bend them. Anyway, here she is, front and back: 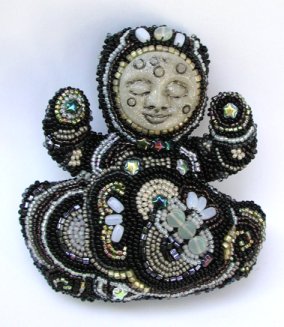 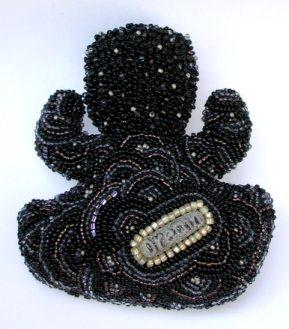 Comments:
I started by making the face. I used the embossing powder in the mould as a release for the well-conditioned polymer clay. When it was removed, I used a tiny tube to impress “craters” on her face. I did the same to the word DREAM (minus the craters). The pieces were baked in my craft toaster oven. After they cooled, I swiped on a bit of black acrylic to bring out the highlights, wiping off the excess before it dried. Then to seal it all, I gave the face 2 coats of Flecto Diamond Varathane.

I drew the body pattern on freezer wrap around the face, cut it out and ironed it onto 2 layers of fabric, right sides together. I took this sandwich to the sewing machine and did a short straight stitch all around the very edge of the paper pattern, leaving an opening at the bottom for turning. I trimmed the fabric to between 1/4 and 1/8th inch of the seam, clipping carefully into the corners, and peeled off the paper pattern. I turned and stuffed the body with fibre-fill, not too hard and not too soft. Then I hand-stitched up the opening. The face was glued into place on the head and the DREAM sign on the back of her skirt.

I chose a selection of beads that seemed to work together. I rarely ever use a neutral palette so this was a fun exercise in colour restraint! I just started in stitching on the front of her body in random patterns and “contour” lines of backstitch. When I got to the back, I did the back of her head in bocce stitch for hair. One row of the large light gold AB seed beads around the DREAM sign was all the light colour (besides a bit of silver) that I used on the back, which is of course the “dark side” of the moon.
This project took A LOT of time to do, but it was quite enjoyable and soothing. Each part just kind of worked into the next without much conscious planning on my part.

I’ve been up to a couple of crafty things, but haven’t had time to blog about them yet. I need to get further along first, methinks. Then there’s the usual socks that I’ve been working on, all 3 pairs alternately. And I’ve been trying to finish the weaving that’s been on my loom for… ever. I need to get on to winding the warp for the samples my friends and I need to weave for our guild. More on that later too.

It’s too hot to think up here in Damselfly’s Study right now, but before I send this off, I have to complain about the Ants In My Pants. That’s not just a cute kindergarten rhyme or a euphemism for “can’t stand still”. I actually had ants attacking me a couple of times recently in my garden. There are zillions of them out there and they’ve decided to take advantage of the ugly black aphids on the feverfew (which is a weed of major proportions in my garden, thanks to one plant I foolishly transplanted from my MIL’s garden many years ago). If you stand near the plants, the ants climb up you and pinch your bare skin. Hard. Nothing like getting ants up your legs pinching on your sensitive inner thighs, let me tell you! So T-Man pulled out feverfew and I pulled out feverfew and there’s still more feverfew. Whew. At least this morning I had long pants on which did foil them somewhat. Though they managed to climb up me as high as the back of my neck! Good thing I don’t freak easily, huh? Feeling creepy now? Sorry.