So Sharon wants to know where I got the Count Your Socks button in my sidebar. Just click on it, hon', and you’ll see! The link should take you to the home page. Don’t forget to email Lynda to get on her list. (Her addie is in her profile.)

I went to my LYS yesterday and got more of the dark charcoal Sisu yarn for T-Man, who decided that he liked it too as I was knitting on the birthday socks for our almost-son-in-law. I won’t be knitting T’s pair until our holidays though. Of course while I was there I noticed that they had some new sock yarns in. And. Just. Had. To. Buy. Some. Meilenweit Mega Boots Stretch, Meilenweit Colortweed, and Fortissima Socka Color — all in gorgeous fall colours. See? 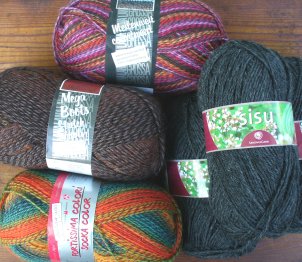 Unfortunately now the sock yarn stash no longer fits in its designated drawers. Oops. I keep knitting but I also keep buying sock yarn. Does this sound familiar to anyone? As a handspinner I can totally resist buying a lot of commercial yarns, but not sock yarn. It’s a disease.

As for the aforementioned ASIL socks, I’m up to the toe on one and midway on the foot of the other. Coming down to the home stretch. I got an extra ball just in case I run out on either these or on T-Man’s pair. Sisu has a bit less yarn in 50 g — only 160 m instead of 210 like Confetti, Regia 4ply, or Socka — and it looks a bit fatter though it knits up almost to the same gauge. It unfortunately makes it a bit touch-and-go with the larger socks on whether I can get a pair out of 2 balls or not. So far I’ve made it (except on the Ninja’s tabi socks), but I’ve only had a few metres left in the end. Not a worry with my smaller socks however. Nice to have an extra ball this time anyhow for insurance. I can always use it for something else if I don’t need it.

In other news, Ms. Polly cost us just over $100 for her vet visit on Monday. She now has antibiotics to take daily for the next 2 weeks to see if it will help her. She seems a bit better these last few days anyway — at least her eyes aren’t running and she’s not sneezing as much. She’s still snoring worse than T-Man though! Good thing she sleeps in the basement at night. The vet thinks that it may be a chronic problem, which I’m sure it is since she's always been a bit wheezy and sneezy but never nearly this bad. Because she’s very old there could be serious complications so all we can do is give her the meds, love her up, and hope for the best under the circumstances. What else can we do? At least she isn’t dehydrated, which was a big concern. Her appetite is also down but she can live on less food for quite some time before it would even show! Otherwise, he says that although she’s overweight (heh!) she’s in pretty good shape considering. I’m always afraid they’ll find something expensively wrong, like diabetes or abscesses or something, so I’m feeling a little more optimistic now that she’s been checked over. It’s not too bad giving her the liquid antibiotic with a measured syringe. T holds her and I squirt it down her throat. She swallows it pretty well without struggling much, thank goodness. Nothing like getting sticky orange-flavoured medicine all over everywhere. At the price this stuff costs, you want it all to go inside the cat where it belongs.

I’m slowly packing up my craft stuff for my holiday. It seems this year will be almost totally The Knitting Vacation. Apart from Angel-Thing who still needs her beads on, I’m taking a bunch of knitting projects. I can get a lot of plain knitting done while we’re driving, so I’m hoping that I haven’t chosen too many things. But it seems they all fit in two tote bags — even my Little Squares Sweater and the yarn for the Ninja’s Sprout #2’s Peapod Sweater. (BTW, we just found out with yesterday’s ultrasound that they’re having a boy! Yay! That'll be one of each like we had, and due at the end of December.) Also I really want to knit the Denise Bag before we go so I can full it in the washing machine and have it to use for my Denise needles. And I need to spin some more yarn for the Little Squares so I don’t have to bring my spindle. Though I guess I could bring it if I don’t get enough spun on the wheel before then. Spinning the singles is ok on the spindle (I did most of the yarn for the front bands that way) but it’s harder to ply with a spindle than on the wheel. Today however, I did some more painting in my Travel Journal instead. Not done yet though. I'm having fun!