It’s really cool here this morning but I think after the clouds burn off it will warm up. I really don’t want the extreme heat we had for several weeks in July. My brain melts over 24 degrees Celsius. But it could be a smidge warmer so I can remove my jacket. There's no heat on in this house. BTW would somebody ’splain to me how come stores have to have their AC set to freezing? Is there no adjustment to “somewhat cooler” as opposed to “extremely cold”? I don’t think you should go in out of the heat to something that feels like a refrigerator in contrast. You know it’s too cold when all the employees are wearing sweaters. Then when you go back outside the heat hits you like a brick. No wonder everybody ends up with a summer cold from the shock to the system. Rant over. Though I still have a migraine.

Speaking of AC that was set right (not too cold), we went to see the Pirates of the Caribbean movie yesterday. It was great though I don’t think it was as good a story as the first one even though the special effects were spectacular. And there’s obviously a sequel because it’s a definite cliff-hanger. Poor Captain Jack!

On to crafty stuff. I’ve been working on the sleeves to my Little Squares sweater. Though I think I should change the name to Little Rectangles since they aren’t really square. I luckily managed to get more of the ribbon yarn at Michaels because I was sure I was going to run out of it. Thank the knitting goddesses for Lion Brand not discontinuing that particular product. I don’t care about the dye lot because it doesn’t make much difference in this variegated colourway. There’s about 4 or 5 different dyelots going by now anyway and I’m pretty sure I have way more than I need. Which is much better than a few yards too little. Now I’m running a bit low on the handspun but that just means I have to sit down and spin some more. I have lots of the Tamarillo roving from Aurelia.

I’m nearing the heel flap on the DIL socks which look like this: 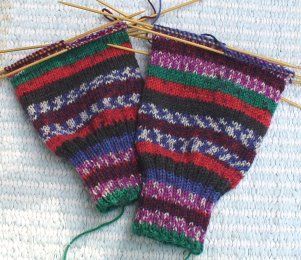 First posted pic with my new camera! Just the usual plain socks that I can work on while reading. More info later – I don’t want her to know what I’m up to since it’s for her birthday in early September. Speaking of knitting, I found this great online knitting book called “How to Become an ‘Expert Knitter’” at Studio Knits by Rachelle King of Australia. It’s really comprehensive and although it’s free to read online you can also get a copy on CD for a fee. Even though I’ve been knitting forever, there’s some great technical information that I found helpful. Also, check out the crocheted baby booties that they sell patterns for. Too cute!

The Lughnasadh 2006 issue of The AntiCraft has arrived today. There’s some fun stuff as usual for this very irreverent craft publication. The goth choker is quite lovely, as is the party light cover in knitted wire and beads. But how about a knitted condom or bomb cosy? The tea cosy sporting belladonna and the mat with poison ivy is a great twist on the perfect tea service. You can embroider an apron to wear while you serve it too. The link is in my sidebar but I need to post the button here so I can stop stealing their bandwidth. Techie stuff. You understand.

I’ve also included the logo for MagKnits who’s link was getting lost in the buttons! Their August issue is out today too and it’s got some great little patterns for accessories such as a chunky purse and baby socks. Plus if you were wondering what you might do with some of that wild and funky “art” yarn, there’s a pattern for handwarmers that you knit until you run out of yarn.

How come there are more patterns that I would make online for free than come in those expensive magazines? Not counting Interweave Knits or Knitter’s which are both great. Even though Knitter’s seems to be MIA around town so that I’ll have to get a subscription if I want to keep getting it. Sigh. I hate subscriptions that I have to pay for in US dollars. But I don’t want to mess up my perfect collection of Knitter’s which I’ve got back to number 1. But I digress. I love the online magazines, particularly Knitty.com which just continues to improve especially now that it’s Amy’s full-time job.

I had a quick 'boo' at the Anticraft site.... love the knitted 'condom'! Might not be too good as birth control though...