I felt the layers of sleep peeling off me this morning and I tried to grab them to pull them back like warm blankets. But they shredded away and I woke up. It was only about 5:30 am which is a bit earlier than normal but when I wake up, I wake up all the way. Unlike a lot of people I don’t stay in a halfway sleepy state for awhile. It was a trait that didn’t endear me to my family growing up. Me all bouncy and chatty in the morning is the last thing those non-morning types want to see while they’re trying to peel their eyeballs open and down some coffee to get their brain functioning. I don’t even drink coffee, just tea (lots of tea!) but it’s really weak. I actually drank hot water a few times by accident and didn’t even notice the difference. Except that I risk a migraine if I don’t get at least some caffeine.

I never used to be such an early morning riser though. I need lots of sleep — 9 to 10 hours usually — so to get up early I need to go to bed really early. Since T-Man’s been working a 6am–2pm shift, we’ve been going to bed at 9pm. Makes for lousy social evenings, I’ll tell ya! We’ve even gotten out of the habit of going to folk music concerts like we used to because we just can’t keep our eyes open. And we have to record any TV we want to watch and catch it later while we’re eating dinner or on a rainy weekend when we don’t have other commitments. We’re always weeks behind! However we managed to mostly keep to our “early to bed, early to rise” schedule throughout our holiday, which was really helpful. We were driving in the morning when it was cooler and getting to our campsite early enough to relax in the afternoon or go for a walk if it wasn’t too hot. We were also going to bed fairly soon after dark so if we didn’t have an electric hook-up, we weren’t draining the battery with the lights. Did that once; never want to do it again. Remote campsite…snow…no jumper cables…only one neighbour camper. We were lucky he was more prepared than we were! This time we bought a new auto battery before we left as the previous one was getting iffy.

Thought I’d share a few more holiday pictures and just to make it a wee bit fibre-related, here’s the wild cochineal I found on some opuntia (prickly pear) cactus in Capitol Reef: 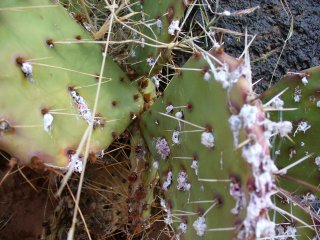 I left it alone because a) it was in a National Park and b) the little wild variety doesn’t have much colour and c) because the darn things were seriously prickly! And for some more lovely rocks, here is Bryce Canyon’s Wall Street trail, looking down. 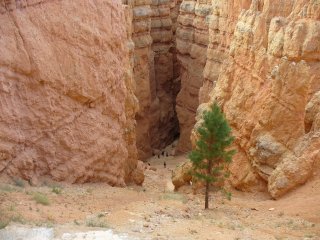 Yep, those leetle teensy dark dots are brave and fit people switchbacking down the trail! And we followed them, down to this: 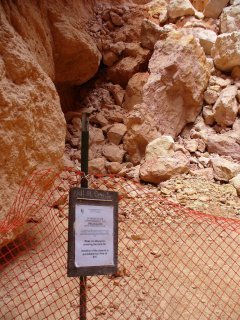 The Wall Street Crash which effectively blocks any further passage. I really wonder how they’re ever going to clear the trail but I hope they do eventually. It leads to another nice loop trail system at the bottom of the canyon. Meanwhile we all had to hike right back up again. Pretty strenuous at about 8,000 feet elevation. Especially for us sea-level types. I found that I had to stop for breath very often on the way back up. And that was the day after we did almost 2 miles of downhill (not quite so steep though) and back up again. Whew! No wonder I didn’t gain any weight on this holiday.

Well, gotta go have a shower before I’m off to a dentist appointment. I’m having some serious work done on a tooth that’s more filled than not. Fun. I should eat something before I can’t chew properly for a few hours.

Just got caught up with your blog Louisa. Looks like you two had a wonderful time!
My didgital camera packed it in last week and apparently it costs very little more to get a new one than to fix this one. My blog will be photoless for a while.
I'll just enjoy yours!
Caught up around home yet?