If you’re expecting the usual textile-related subjects today, please stop reading now. I’m in the mood for tech-talk! However, if you continue on, you might um…enjoy the discussion?

Since T-Man just bought a new HP Media PC, I’ve been thinking about computers and how much they have impacted my life over the years. We’ve been a computing household since 1982. Yes, that’s almost 25 years! Starting with a Commodore 64 we upgraded to a PC with a baby version of Windows. We would have gotten a Mac…er, Apple (no Macs yet!) but they cost about $10,000 then and PCs were less than half the price plus there was more software and peripherals available for them. The situation has changed now so that PCs and Macs aren’t much different in price or in use but there’s still a huge difference in availability. I know Mac-heads are serious about touting the advantages of their system (please don’t shun me!), but I’ve never seen a compelling reason to switch. I’m happy with my PC. I’m now on my third HP Pavilion — only because one got stolen — and T’s new one makes the fourth.

However, he used to be a Mac-head. He always used them at work and brought home a cute little vintage Mac SE and also has a G3 laptop that was limping along on life-support and has joined its relative in the basement “museum”. Nowadays at work he has both systems side-by-side but uses the PC 90% more often. I guess that’s what inspired the switch to PC at home. He occasionally works from home when he’s on-call or not feeling well and now he doesn’t need to usurp my computer to do it! We can also record TV shows and watch them from the comfort of our own bed. How decadent, hey? We want to eventually get a new wide-screen monitor for a better picture and then I can have the new flat-screen 19” to replace my old 17” hand-me-down from DD. Do you want to see who guards my computer? 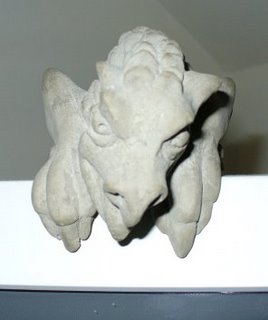 This is my little gargoyle buddy. I just realized he doesn’t have a name or at least he hasn’t mentioned it to me. (Guess he’s keeping it a secret.) He’s there to make sure nobody ever steals my computer again. Not sure exactly what he would do if they tried, but then the element of surprise is definitely in his favour, right? I think he’s cute, in a scary sort of way. He has made me jump more than once while working after dark as I caught sight of him from the corner of my eye! Wonder if he’ll be able to balance on the flat-screen? I might have to make him a special perch.

I’m really lucky that my husband is very tech-savvy. He can fix things that go wrong. He can take apart systems and put them back together with everything plugged in correctly. (I’d have to label everything with masking tape!) He can open the case and mess with the guts. (Not me!) He’s taught me a lot over the years, but I still go to him if I can’t solve a problem by myself. (First try a reboot!) Regular tech-support comes a distant third. When he first got his new computer it had a problem, but after checking it himself he found it was just a loose wire that was affecting the fan. Poof! All fixed. No repacking it up and dragging it back to the store. I can’t imagine what it would be like without my own personal live-in geek. And believe it or not, I help him with computers sometimes too. I’m probably more of a real-world user than he is.

So how has the computer affected my life and my work? Besides taking up a huge chunk of my time, I love being able to see what like-minded people are making and join in discussions about things that interest me. It’s changed my focus and my work and I’ve learned so much. Unlike many others, I’ve never been a big game player except for the occasional Taipei/Mahjong (I like matching tiles) so that’s not at all important to me. But even before the Internet, I used the computer for designing, documenting, and writing and now I can share my knowledge and ideas with others far easier than ever. As I mentioned yesterday, it’s going to be interesting to see how much I miss it all when I’m away from my desktop for 3 weeks. I’ll have my little Palm T/X with me so it won’t quite be cold-turkey. And I’ll have my knitting, beading, reading, and my Travel Journal to play with. Should keep me busy enough.

Well, I for one, will miss you while you are away!
We have had computers in our home since 1987 and many upgrades since then. Can't imgaine life without one now. But I must confess that I have a love/hate relationship with 'the box'. I love the freedom it gives but resent the time it gobbles up.
It's a real delimma