I’ve been somewhat remiss in my posting of late, but I’m sure you don’t want to hear about all the mundane things in my life. As much as I don’t really want to write them. I’m probably boring enough at times already, eh? Besides I haven’t really accomplished that much, just plodding along and hoping the direction I’m heading in is forward and not back. Guess I shouldn’t be so introspective when the sun is shining so brightly! It’s just that time of year when things are winding up to a big climax and I deliberately leave myself out of much of the kafuffle.

However today I plan to make things a little more festive around here, even if the only ones to see it will be me and T-Man. He already put up our red and blue lights outside and the nifty red/blue shimmering ones that tease my eyes are on the back porch where I can see them from the kitchen. I will put up my Christmas tree — the one my birth mom made. It hangs on the wall in a frame with branches made from glued-on green glass (broken wine bottles!) and junk jewelry decorations. Real lights protrude through holes my brother drilled in the back and the cord hangs down so you can plug it in. It is so amazingly tacky that I love it! Mother made one for each of her kids but we do vary in how much we appreciate the effort. As you might imagine, kitsch is not everyone’s decorating style.

The other thing I did was to put my badass handspun handknitted teddy bear, Black Jack, in his Santa hat and fake beard. Then I put him in the basket on the front door so he can freeze his fuzz off! Heh! Meany, aren’t I? I threw in a few of the wooly pears and some greenery and pyracantha. (Complete with prickles — look out, Black Jack!) I’ll take a photo when I’ve got it just the way I want it. I’m not quite happy with the arrangement yet and it’s too darn cold out there today to hang out fussing around. I have to work on it in stages. I’m not sure I’ll get around to much more fancy stuff but we’ll see.

Yeah, I know my version of holiday decorating isn’t cute or pretty or even particularly traditional. So? I’m in a transitional phase regarding this particular season. I’m trying to ease out of the commercial and religious stuff and get down to the basics of lighting up the darkest days of the year and celebrating the return of the sun. Well, I know it doesn’t actually “return” but you know what I mean.

Changing the subject, my Spectrum Study Group met on Saturday and we had quite a productive day. One of our members took a class at the Maiwa Symposium back in October on making a Miao sewing kit. The Miao indigenous people of China do wonderful elaborate embroidery and they have an ingenious little booklet made from paper and cloth that holds their needles, threads and patterns. Here are some old ones in a couple of photos that she took in class: 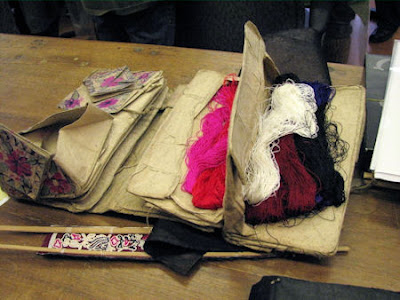 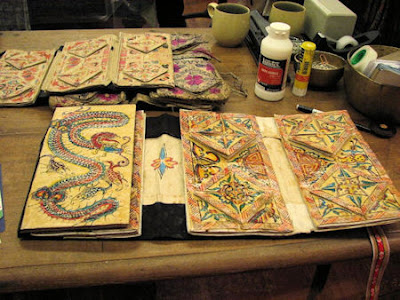 The inside has many pockets folded from a special durable mulberry paper. We couldn’t get the same thing (apparently it would have been about $25 a sheet) but settled for a substitute at half the price. The outside is supposed to be the beautiful polished indigo cloth that the Miao use in their clothing. It’s very stiff and feels more like heavy paper than cloth. However, we all plan to use something different for each of our kits. I think I’ll use a piece of Chinese brocade in copper with gold and blue dragons. I already have a suitable kumihimo braid for the tie that matches very well. We only got as far as cutting out the variously-sized pieces of paper from our large sheet and to begin the folding which is similar to origami but also includes gluing. This is her prototype that we were to duplicate: 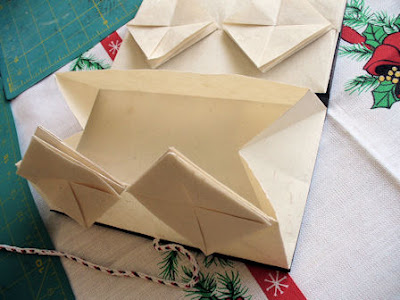 I may or may not get it finished on my own before the next meeting in January. You’ll be the first to know. Right after me! Oh, I forgot to show you the pot luck dishes many of us brought all wrapped in Japanese furoshiki. Festive, huh? We didn’t actually plan it that way on purpose. The green one is mine. 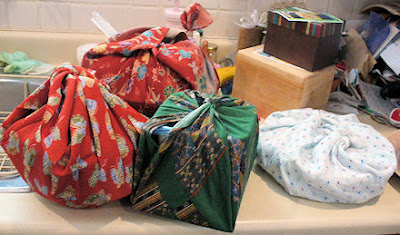 I got the Pink Froth Socks done this morning. They’re quite cute and I’m sure they’ll fit at least for awhile. I like to put lots of ribbing in kids socks because it stretches more than plain knitting. The socks are currently drying so no pics until tomorrow. Now I can go back to knitting on T’s OYT Socks. I have another pair of men’s socks to make my son The Ninja who’s birthday is in January. I already have the wool but I’m debating on whether or not to overdye the boring grey marl. Probably. I can’t help myself sometimes.

I'm not into the religious or commercial aspects of Christmas either. I don't put up a tree or decorations - why bother for just me! But, I do give gifts to the orphans in my life who have no where to go. I do collect socks for the shelter & enjoy watching the old classics on the tube whilst munching my own turkey leg . . . I'll spin the season away.