You Know You Have The Flu When…

Your best friends are Kleenex, Olbas oil, Advil, hot tea and every warm shawl you’ve ever knit. However, I am feeling somewhat better today. Which is just as well since my manservant…er, husband had to work today so I have to get my own tea. At least I think the fever is staying down which was a big part of my discomfort. Thankful for small mercies I am.

Anyway, you don’t want to hear about my trials and tribulations. The good news is I’ve finished the EvenMorePink Socks but I need to dye some yarn before I can start on my next sock project for The Ninja. Unfortunately the dye studio seems to be too far away downstairs and too cold and I still have to wind the balls into dye skeins which makes my head hurt. Maybe tomorrow. Then they have to dry before I can wind them back into balls to knit with. Meanwhile I’m going to start yet another project, a pair of gloves for T-Man’s auntie who will be turning 90 in February. I have some Meilenweit Colortweed sock yarn: 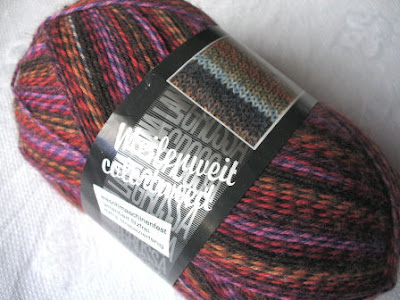 that hopefully she might like and sock yarn makes great gloves. Hope she doesn’t mind if these are fraternal twins though since this yarn is impossible to match up because the colour sequences aren’t consistent. All the more fun in gloves when the fingers are each different from the others! Yeah, I know I need a pair of gloves myself but I do need a gift for her and gloves are faster than socks, though a bit more fiddly. It’ll be good practice since I haven’t made a pair of true gloves for ages. I’m using Marnie MacLean’s “Hooray For Me” fingerless gloves because they fit very well and all I need to modify is lengthening the fingers to the tips. (For Auntie, who has normal-sized hands, that would be somewhat longer than mine.) They’re already sized for sock yarn. Perfecto.

It must be a feeling of achievement to get to turn 90 years old, doncha think? Her older sister already got to that milestone a couple of years ago. These are the last 2 surviving sisters of T-Man’s late father, who was the baby of the family, both widows and neither had any children. They have maybe 5 out of 6 cylinders functioning but regrettably they forgot to leave their childhood differences behind and don’t get along well enough to live together. Interestingly they both regret it but don’t seem to be able to compromise. So each is in their own home (the younger in a small house and the elder in an apartment) with some support networks in place, unfortunately not nearly what I would consider adequate. But it’s their life, yes? Nobody can live it for them. Remind me to get some serious life plans in place before I hit 90, won’t you?