On Friday I bribed myself to finish the housework by dyeing my mordanted skein of SeaWool at the same time as I vacuumed the basement dye studio area. As I originally planned, I did end up using logwood extract at 3% of the weight of the skein and a teeny little not-really-measurable bit of cochineal extract. I don’t have a lot of experience with botanical dyes but I have to say it was the weirdest experience! Before I put the skein in, the dyebath was kind of a lovely wine colour. When I entered the skein it instantly went golden brown! The dye was brown and the skein was brown. I was thinking I did something wrong but continued to raise the temperature of the dyepot and stirred and as it got hotter the yarn got more and more purple. Guess I didn’t do anything wrong at all. At that point I decided that it wouldn’t hurt to add a smidge of cochineal which made the yarn a slightly more reddish colour. I’m quite happy with it now but I’m having trouble figuring out which beads go with it! It also is surprisingly difficult to photograph accurately. This is as close as I can get: 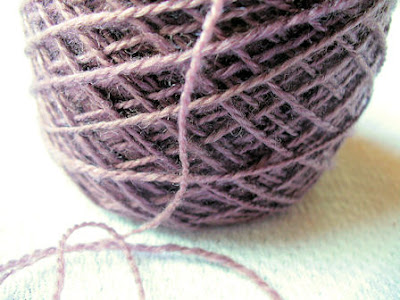 Yesterday Milady Daughter and her friend Y came over to play in my dye studio. But first we went to the wool shop for some yarn to be used to weave Milord some bright plaid trews. Yes, SCA garb. But a change from her first plan of a tunic for herself and in finer yarn than she was first thinking. In Birkeland Bros’ backroom stash we found an old and very large cone of what we think is merino 2ply at about 2,450 ypp, according to the McMorran yarn balance. It weighed over 2 kilos and had enough yarn on it to weave both trews and tunic. Good stuff! Dusty and dirty and linty but useable especially since we were going to dye it and she got a good price deal. After a lot of skein winding, we went to work with the dye.

Y dye-painted (or more like dye-splashed) all her yarns and used up a lot of my acid and Lanaset dye stocks that had been sitting around. She only had to mix one more stock in a colour that she ran out of. She got the big worktable and the steamer pot all to herself and made some wild wool skeins that hopefully will become a Rogue Hoodie and some socks.

Meanwhile MD and I weighed out her skeins and I plied the calculator to figure out how much yarn, mordant and dyestuff she needed for the trews. We got the alum/cream of tartar mordant pot on to simmer and started measuring out her madder. She wanted a deep orange-red so I went with a doubled amount of this nicely powdered madder root (that she bought from Maiwa Handprints awhile back) at 40% of the total weight of the 4 skeins of yarn. I did 3 dye extractions and was really concerned because the first extraction boiled which you are warned never to do with madder because it brings out the browns. Didn’t seem to spoil the colour at all though because we got a brilliant deep red that is the best colour I’ve seen from madder. Gorgeous! Then I did 3 extractions from osage orange chips at 50% of the weight of the single skein. It was a brilliant neon yellow but unfortunately picked up a little of the madder staining the enamel pot (we didn’t scrub with cleanser like I usually do between colours) so I added 2 cups of the madder exhaust to it to tone it down and blend in the blips of red. It’s still a really pretty golden yellow and the stains are less obvious and more “interesting”. Crisis averted.

I also calculated and weighed out the rest of the dyes MD wants to use on the remaining 3 skeins: cochineal bugs and logwood extract. Plus we bagged up the right amounts of mordant for some wool roving that she also bought. She can carry on doing the rest at home since none of this is toxic so no worries about doing it in her kitchen. She has a pot to dedicate to dye which is the important issue. After the staining with the madder, you can see graphically why it’s so important to keep a dyepot separate from regular cooking pots! Even if it’s not poisonous you don’t want to eat it, even in small quantities. I’m sure it’s much easier for her to dye in my dye studio, but she lives an hour away and it’s sometimes hard to schedule time. They both helped clean up everything so that was nice. Here’s some of the results: 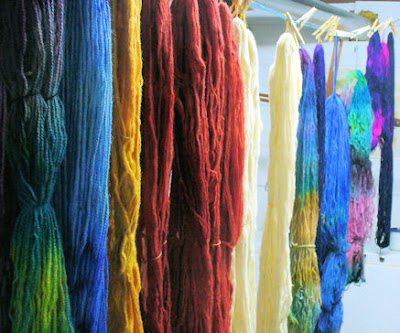 The yellow skein is the osage/tiny bit of madder and the red skeins are the madder. The rest of them are acid dyes. Purty, huh? And here’s the exhausted dyers, Milady Daughter: 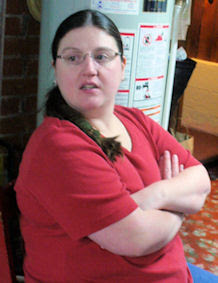 And Y, sitting on the concrete floor in front of the furnace and knitting: 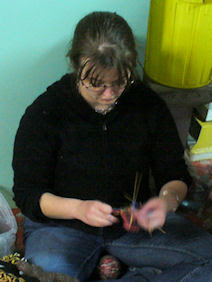 They left at 4pm for the long drive back to just as it was beginning to snow! Luckily here at least we didn’t get more than a light dusting. But even so T-Man decided we should take the Mini to his work’s big party downtown last evening. That worked out quite well — no waiting for taxis or buses and I was really grateful for the heated seats! Just before we left I finally decided what to wear: a funky combo of brown short dress with long sleeves, Kashmiri shawl, black leggings and black lace-up granny boots. I was right about there being all levels of fancy and non-fancy dress at the party so I wasn’t at all out of place. It was enjoyable but there was a lack of tables and chairs so we stood for most of the several hours we were there. Not too many people to chat with since T has only been working there for 3 years. He doesn’t hang out with his coworkers socially (most of them are younger than our kids and have different ideas of fun than we do) and it was a very large crowd of hundreds of employees, most of whom were strangers to both of us. The drinks were $7 but the wine was even more pricey at $7.75 per glass! (I had 2 of them but T only had one. He was driving.) The rest was on the house and there were lots of things to nibble and nosh on. My fave was the maple-glazed spicy salmon kebabs. Yum! The band was a bunch of old guys playing vintage blues, somewhat too loud so I had to take off my hearing aids to avoid painful reverb. (Yes, I do see the irony in that last statement. Heh!) We didn’t win a raffle prize. No surprise there. We got home at about 10:30pm which for us is very late. And we slept in all the way to 7:30am this morning!

This afternoon I met my fellow Raveler, Lauren, and we went to The Grind hoping to meet with more knitters. But I guess the snow that was falling to the east (but we were in the sunshine) stopped everyone from venturing out. It was just we two and we had a nice visit. I hope more show up next time. It would be a shame if this isn’t working as a group. We shall see.

I would have been there but the snow stopped me. Next time ( I know I seem to say that a lot these days).

The weather was bad. It snowed about 3 inches between 10:30am and 11:30am and that was just in Burnaby. We only saw about half an hour of sun just as the snow was stopping at 2pm.

The skeins are gorgeous! Sounds like you girls had a great day.