Apparently I can’t count to 5. I thought I had all the 8 Hearts knitted yesterday and could go on to stuffing them preparatory to fulling the lot today. Unfortunately I managed to make 3 of them smaller than they should be by leaving out 2 rows of the centre section. Pitooey. Now I have to keep knitting for awhile longer. It might help if I actually paid attention to what I was knitting. Maybe.

While I was screwing up my hearts, I was also screwing up my guild’s website. I somehow managed to break the file uploading feature on it a couple of months ago and our admin couldn’t fix it. Finally my friend, neighbour, fellow Raveler and Computer Wiz Extraordinaire Lauren had time to check it out. She fixed it within 5 minutes so I cheerfully went home and uploaded another file to test. All was fine. Then yesterday I started to upload another file and poof! Messed it all up again. A whimpering email to Lauren and she fixed it yet again. At least now we know what the problem is so hopefully we can do something about it. Meanwhile I’m not touching it! I think I have whatever is the opposite to the Midas Touch with that website. (Leaden Touch?) I did warn the guild I know just enough to be dangerous. You can bet we’ll be discussing this at the executive meeting this evening.

So back to the 8 Hearts for a moment. I’ve decided how to bead it now. It came to me when I was going back to sleep last night after getting up for a potty break. Amazing how the best ideas come when you’re almost asleep but not quite! It entails stringing and some 2-needle couching and hopefully will go relatively quickly when I get to it. I still have 2.5 hearts left to re-knit. And I’ve been very good and not even touched any other knitting. Even though the Unmentionables are yelling at me, the Hepburn Cardi is whining in its basket and the Maizy socks that I started (when I shouldn’t have) are patiently waiting to come with me to the meeting tonight. They know they’re the only portable project at the moment so they’re the obvious choice for travel knitting.

BTW I need a name for those socks. How about the A-Maizing Socks? The pattern I started with (and sized down slightly) is the Ridges & Ribs Socks by Dave of Criminyjickets. I’m liking how it looks: 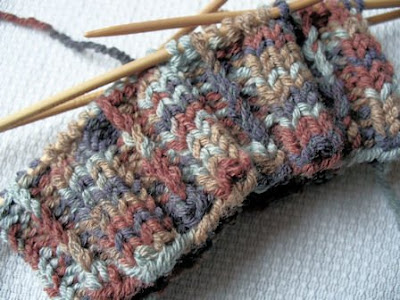 Though there’s only an inch of one sock so far since I’m not allowed to work on it until the hearts are done. Or redone. It’s not a hard pattern and I like the firm twisted single rib that keeps a multicoloured yarn from being boring. It’s formed by a double-yarn-over knit st that then has one loop dropped and the remaining elongated st slipped as if to knit for 3 rows which twists it nicely. The Maizy yarn is a bit squeaky and splitty to knit with but the resulting texture is soft and stretchy. It’s going ok as long as I pay a bit of attention so that I don’t miss a ply with my needle and remember to slip k-wise which is hard for some reason. Some people have said they don’t like corn fibre because of the alleged plastic-y feel (which to me feels more like scrooped silk) but I don’t find it objectionable. Then again I can’t dye it with anything I have available to me so I’d better like the colour the way it is. No do-overs there.

I’ll leave you with a photo of my most not-favourite wild animal visitor: 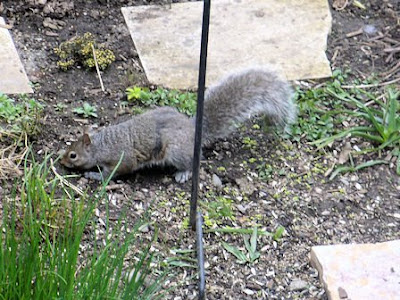 Don’t be fooled by that cute face and fuzzy tail! This is one of the Evil Rodents who give me no end of grief. Notice how he/she is under my bird feeder eating the dropped seeds that might otherwise have gone to the sparrows or juncos. One has even managed to climb that slippery metal pole and leave bite marks in my plastic feeder too. We coated the pole with hot pepper sauce which foiled them for awhile until it rained and washed it off. Luckily most of the squirrels can’t or won’t climb the pole. Just my walnut and hazelnut trees (where they eat all the nuts), my house (where they tried to make a nest under the eves), my garage (easier access to the walnut tree), — you see where this is going. Anybody got a way to sue squirrels for ruined outdoor Christmas lights? They thought they were eating my rhododendron buds but got a bit of a surprise. Didn’t stop them from making mincemeat out of the lights first though. Slow learners? Too bad they were LCD lights and the current wasn’t enough to zap them! Grumble. Grumble.