Right off the top I need to admit to an oops! Somehow I managed to unlink all the podcast links I had on yesterday’s post. I’ve fixed them now so you can check again! Sorry about that. Not much use without the links, was it?

Still knitting hearts (just finished #6) while trying very hard not to knit on anything else until they’re done. Boy, that’s hard! I want to work on the Unmentionables. Erg. Why does this happen to me every time I get involved in a swap. I have this total aversion to making more than one of anything. The only reason I even finish a pair of socks or gloves is my trick of working on them alternately. If I did them one after the other I would definitely suffer from Second Sock Syndrome. So I’m using a variation of my Alternating Trick on the hearts: knitting until I get bored, stuffing until I get bored, knitting some more, stuffing some more etc. I won’t full them until they’re all ready to go because it’s much easier to do them all at once. Then there will be some tough slogging with the beading. I haven’t even chosen which beads to use yet! That will be the fun part, rummaging through the bead stash.

I also charted out the heart pattern, though it was difficult with such an odd shape. I had to make the second “lobe” separately because it wouldn’t fit in place. It does look like the real thing somewhat though, doncha think? 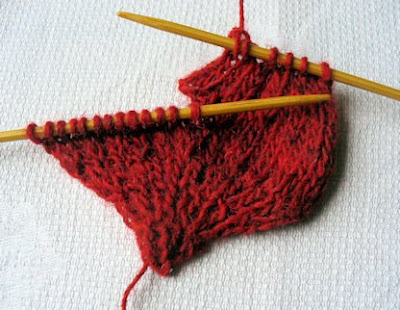 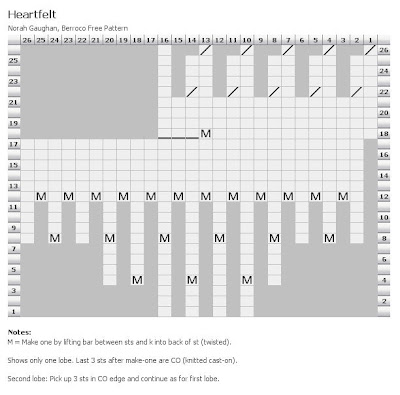 I find I can follow the chart, weird as it is, easier than the written words because I don’t lose my place so easily. Somehow I can see at a glance where I am rather than trying to remember what line of the written pattern I’m on. Carrying on.

The weather is cloudy and cold today. I want Saturday’s weather back again! It was so nice and warm. Sigh. What a teaser, eh?