You know those people who have certain days for certain things on their blog? Well I’m not one of them because I just can’t be that organised. And then there’s the ones who can keep on topic. Not me. I’m all over the map with whatever interests me at the moment. I don’t even always have photos to get your attention. Nevertheless there must be a few of you who faithfully slog through my ramblings (flittings?), probably skipping merrily over the boring bits. You don’t comment much but I know you’re out there because I get a weekly traffic report from Sitemeter! Handy that.

So have you seen the photos on Flickr from Yarn Harlot’s Inexplicable Knitter Behaviour Toronto photo-scavenger hunt? Some of them are very good and some are amusing. I watched all of them as a slide show while starting on the second leg of the Unmentionables. Here’s the first leg and why I love the Denise needle set: 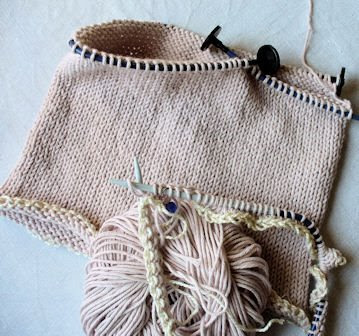 I just popped on a joining piece and another cable and slid the stitches on hold over. Then stuck stoppers on the ends and put the tips back on the original cable all ready to start the second leg. I put the crotch stitches on its own holder. Easy-peasy.

No other knitting has gotten done recently. I was too busy washing 4 loads of laundry, cooking a huge pot of soup, changing the bed sheets and chopping that darned rhubarb. I’m still not down to the bottom of the now-yellow-blotched bucket. (Rhubarb stains plastic. Who knew? You should see my vinyl gloves too. Makes me glad I'm wearing them.) It’s much more work than I expected though it’s easier to chop than the madder was. There seems to be more of it somehow even though it filled the same bucket. It might have helped if I hadn’t already chopped all the veggies and ham for the soup pot. My neck with it’s degenerative disks doesn’t allow too much pressing downward without lots of breaks in between sessions. I certainly don’t want to lose feeling in another finger (one is too many already) so I’m rather careful about this.

You’d think I’d be tempted to work on the Circus Blanket again with the lovely early morning sun shining on it. But no. Maybe later today. 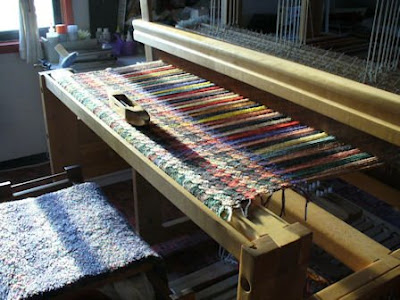 The sun coming in does make me inordinately happy all the same. I mostly don’t mind the rain and I have to say the giant snowflakes and hail and thunder and lightning we’ve had recently were kind of exciting in their own way. But you can’t beat early spring sunshine for cheerfulness.

Why does it creep me out to hear folks refer to their pet dog or cat as if they were a child? Saying “you’re just Momma’s baby girl” in a high squeaky voice to a dog is icky, people. And what’s worse is when they carry them around in snugglies and push them in strollers and let them sleep in their bed with them under the covers. Ewww. There are so many neglected and abused children in this world. Why are there more pampered pets than loved and cared for children? Is it because pets are always dependant on you and love you anyway, no matter what? Whereas children grow up and have their own lives and forget to call you unless they want something. But that’s the whole point of parenting, to help a human become an independent responsible adult. And then there’s all the folks in the world who don’t have adequate food when most of our pet animals are eating very well indeed.

Don’t get me wrong — I love animals. Even ones that other people don’t like, such as snakes and lizards and spiders and crows. And I’m not denigrating pets. I have had lots of them in my life (along with the kids). Everything from fish and a turtle to rats and angora rabbits and right now it’s the geriatric mom and daughter cats. And though they sleep on my bed in the daytime, they have their own bed at night downstairs with the door shut. I like my privacy and only share my bed with my spouse, thankyouverymuch. Pets are companions and entertainment but they’re not child-substitutes. Are they going to look after you when you’re old and infirm? Of course not. You’re going to look after them when they’re old. And I’d love to know what happens to all those plastic bags of crap in the landfill. At least they could use biodegradable bags. Now all you pet lovers are going to send me hate messages, aren’t you? G’wan, I can take it.

This animal is not a pet but a pest. Can you tell who visited my water garden again this morning? Across the deck: 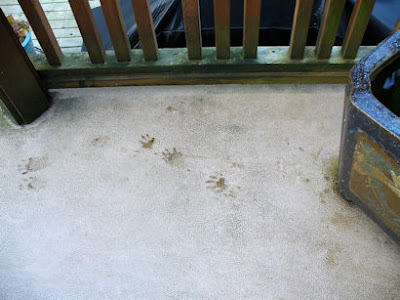 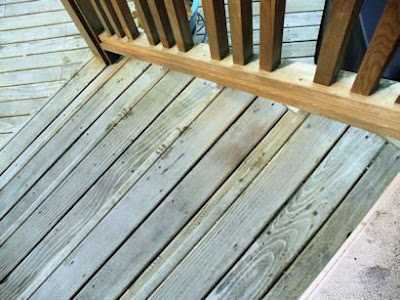 And down the stairs. At least he (or she?) didn’t knock the spout and The Auk into the water this time. How come I never get to catch the sneaky critter in the act? Just the evidence after the fact.

An opossum? A raccoon? Geez, I'm a biologist (I love damselflies!), you'd think I'd know those tracks.

That circus blanket looks like fun - when I get a chance, I'll ramble through your archives (I just found your blog) and find out the back story.

Not hate mail :) but my cat is definitely family and treated that way (which is I just spent a ton of money for life-saving surgery). She isn't replaceable to me.

I agree that they are definitely pests, but still for us anyway they are a big part of the family. In a way they are child substitutes for now, until we can afford to have some real kids. Cats are also quieter.