Horking Up Hairballs In Heaven 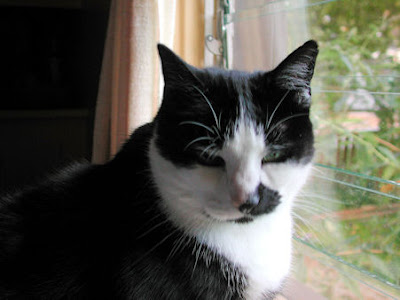 Julie
1989-2008
My Mother’s Day weekend is a little sad this year. We just buried my cat, Julie, in the Family Pet Cemetery. She goes to join our other long-gone pets, including our first cat Scrungie, 6 rabbits, 5 or 6 rats and a turtle. Only our second cat Nicky isn’t buried there since he died at the vet’s and went to wherever they dispose of deceased animals. She’s in good company anyway and I included some of her favourite catnip from the garden and a few toys.

Julie (her actual name was Julius after Groucho Marx’s real name) was born on the kitchen floor in this house nearly 19 years ago, the last of Ms Polly's five kittens. Of all of them Julie had the most toes, 6 on each foot. Her mom doesn’t even have quite so many. Apparently extra toes on the hind feet as well as the front ones is quite rare, even more so than extras on the front alone. She also had the tuxedo colouring and crooked tail that she inherited from her tom-cat dad, Kinky. She outlived her brother Dhoughal, who passed away a couple of years ago from cancer. We don’t know what she might have had that was ultimately fatal but she was not eating much and had been losing weight over the last few months. But she was still running around right up until yesterday. When we noticed her in her bed in obvious distress, I tried calling the vet but it was too late to get her in before they closed. It would have only saved her a few hours of discomfort anyway and would have cost us much money for a dead cat. I think we made the right decision to leave her be but I knew she wouldn’t make it through the night when I went to bed last night. So I said my last goodbyes to her before leaving her.

Lots of visitors to our house never even realized we had two cats (and not just one old but extremely friendly tabby). Unlike her mom, Julie wasn’t much of a people-cat and would usually get lost when others were around. When you went to pat her she would first duck away and then back in to be stroked and she didn’t let you touch her face or under her chin. She loved to be brushed though and would run up when I had her brush in hand and flop down just out of reach. I always had to move a little towards her instead of the other way around. She also never sat on a lap but instead lay down right beside my leg and hated being picked up. Despite her reticence she was always gentle and never scratched or bit. Not even when Stargazer tried to pull her fur out with his baby fists! I know I’m going to have to be even more careful to groom Polly now that her daughter isn’t around to help. They always did each other’s ears and nape. I wonder what she thinks or if she’s even noticed her daughter is gone.

Nineteen is pretty elderly for a cat, particularly if they have some access to outdoors. We almost lost Julie a few years ago when she wouldn’t come in one night and got attacked by a raccoon. Luckily we were able to get her to the vet that time and, although it cost us $800 and she had to wear a splint on her hind leg for several months, she eventually healed well. Never stayed out again though! Now I doubt Ms Polly is going to last us much longer. We actually were expecting her to go first especially given how overweight, deaf and slow she’s gotten lately. There will be no replacements. T-Man and I are both adamant about that.

Goodbye, Ms Jules. You were a dear (if somewhat eccentric) cat. You were part of our family from the day you were born and you were loved.

So sorry about your cat Julie. My own cat died a couple years ago and we haven't replaced her. I still miss her.

Our condolences.. it's a sad day in your home.
Pets become our 'other' family don't they? As much a part of our lives as our kids.

We had to put our terrierSolli down a few years ago and coming home to her goofy nephew Connor eased the passing. But Connor is going to be 11 in a few days time and he's not so quick anymore and sleeps every chance he gets. In spite of this, he still is first to the door for a car ride and keeps us on track for meal times. He's a great lap warmer and we couldn't watch TV without him!

We say no more pets too...but I'm not holding us to that as they enrich our lives too much.

Oh no! I'm so sorry to hear about your cat. My deepest sympathies...

Your "title" gave me a chuckle, but by the time I started to read your entry, my eyes welled-up! We too, are a family made richer by the pets who keep us. A truly sad day. You will miss her greatly.....gail in surrey

Sorry to hear about Julie.

Not the best thing to have happen on Mother's Day.

But she lived a good long life with kind caring benefactor's. What more could a cat ask for?